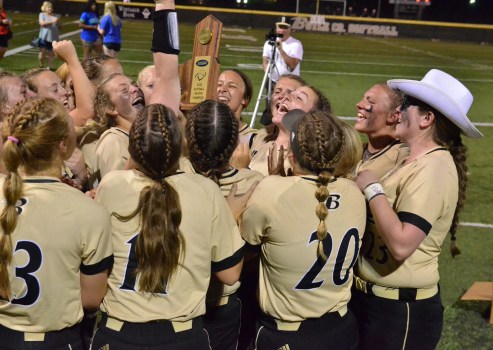 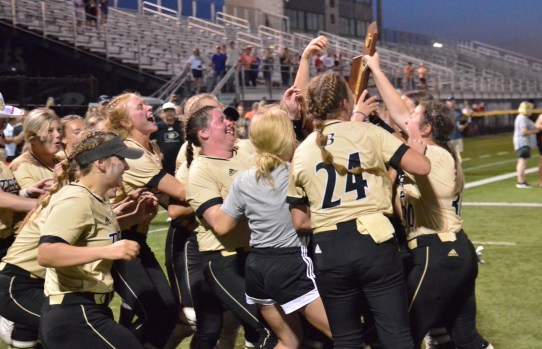 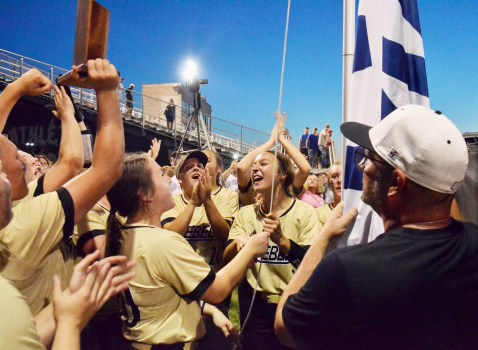 Boyle County seniors Madison Luttrell, left center, and Kennedy Qualls raise the team’s “W” flag for the final time at Rebel Stadium as coach Brian Deem and other players look on following Boyle’s 11-3 win over Southwestern in the 12th Region Tournament championship. It was the team’s final game at the field it has called home since 2011. Photo by Mike Marsee. 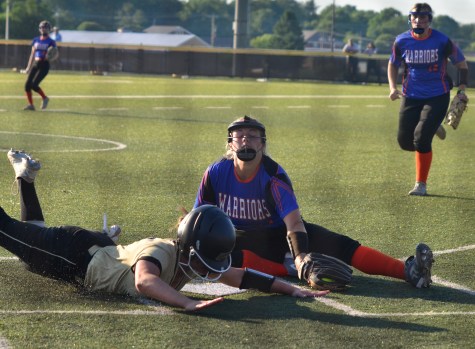 Summer Ray of Boyle County slides into home plate ahead of a tag by Southwestern pitcher Kaitlyn Gwin to score on a wild pitch during the first inning of Boyle’s 11-3 win in the 12th Region Tournament championship. Photo by Mike Marsee. 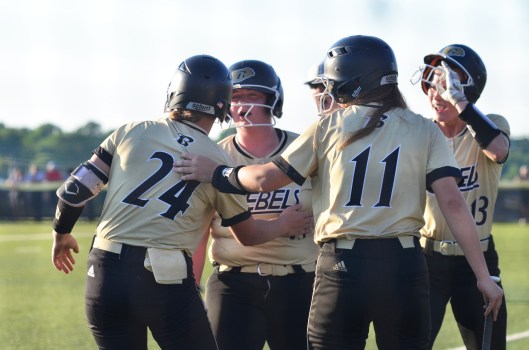 Kayleigh White (24) is congratulated by Boyle County teammates Lauren Tipton, Havannah Maddox and Courtney Sandy, left to right, after White and Sandy scored on an error during the second inning of Boyle’s 11-3 win over Southwestern in the 12th Region Tournament championship. Photo by Mike Marsee. 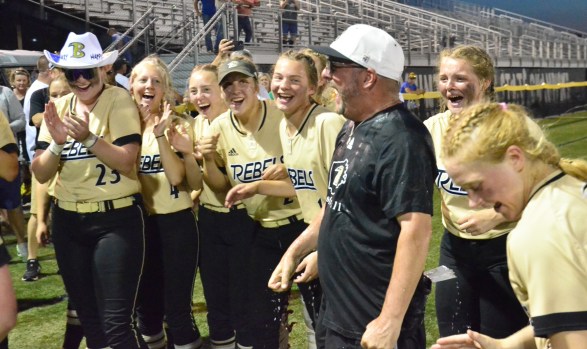 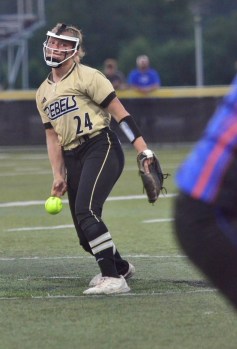 Kayleigh White of Boyle County pitches to a Southwestern batter during the fourth inning of Boyle’s 11-3 win in the 12th Region Tournament championship. Photo by Mike Marsee. 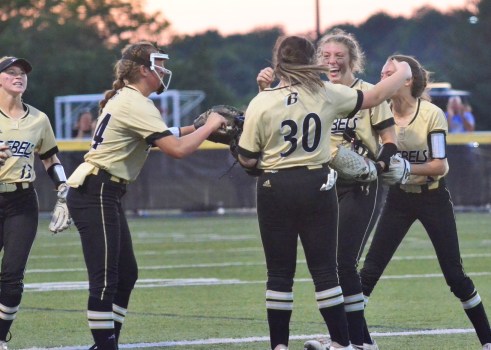 Ella Coffey, second from right, is congratulated by Boyle County teammates after she tagged a Southwestern runner out at third base to complete a double play during the sixth inning of Boyle’s 11-3 win in the 12th Region Tournament championship. Photo by Mike Marsee. 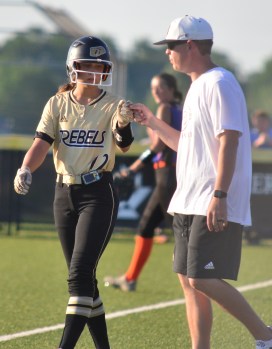 Katie Qualls of Boyle County is greeted by first base coach Jameson DeBord after Qualls reached base on a bunt single during the second inning of Boyle’s 11-3 win over Southwestern in the 12th Region Tournament championship. Qualls was 4 for 4 with two RBIs. Photo by Mike Marsee.

It was a party the likes of which Boyle County softball had never seen before — and will never see again.

The Lady Rebels found themselves in unfamiliar surroundings on their home field Monday night when the largest crowd they had seen there turned out for the regional final.

It was business as usual by the end of the evening, however, as they raised another regional championship trophy after winning their fifth consecutive 12th Region title.

Boyle battered Southwestern 11-3 in the title game, extending its domination of a 12th Region Tournament it has won seven times in the past 10 seasons by winning a rematch of last year’s final.

“I think this one feels even better. It was a home game, we had a bunch of fans here,” Boyle pitcher Kayleigh White said. “We knew it was going to be tough. They came out swinging and we came out swinging, and it was a tough game all the way around.”

No. 16 Boyle (26-9) played a full seven innings for only the fourth time in its last 11 games and for the first time in the regional tournament. But the Lady Rebels kept the pressure on Southwestern all night long by keeping the ball in play.

Boyle hit more home runs (46) than all but two teams in Kentucky this season, and the Lady Rebels had five home runs and 10 extra-base hits to knock out their first two regional opponents in run-rule wins.

However, they relied on singles to outlast Southwestern (24-6). They had 17 hits, all but one of which were singles, they took advantage of six errors and they struck out only four times.

“Once you keep getting balls in play, sometimes the defense will go haywire and make a few mistakes, and we took advantage of their mistakes,” White said.

Madison Luttrell went 4 for 4 and drove in two runs to lead Boyle’s 18-hit attack. Summer Ray and Kennedy Qualls had three hits each, and White and Lauren Tipton had two each.

The Lady Rebels also had a handful of stellar defensive plays and a third pitching win by White in as many days to earn a return trip to the state tournament later this week. Boyle will play the 11th Region champion in a first-round game at 6 p.m. Friday at John Cropp Stadium.

The Lady Rebels won last year’s regional final 4-0 at Southwestern, and they had the home-field advantage this time around. That resulted in a festive atmosphere for the final softball game at Rebel Stadium, the team’s home since 2011.

Students showed up in droves, lured to support their team by free admission and free food. Softball alumni turned out for one final game on the field where they once starred. And scores of others from the community showed up as well.

Combined with a large group of Southwestern fans and a number of others, they made up what was almost certainly the largest crowd ever to watch a softball game in Boyle County.

“We’re not used to huge crowds, so it is a little bit nerve-wracking, (but) I was very glad to see them,” Luttrell said.

Beyond the regular seating area, dozens of fans took in the game from the football grandstand, which is in foul territory above the left-field line in the stadium’s softball configuration and which usually attracts only a handful of people for Boyle home games.

Students and others lined the fence along the left-field line and in left and center fields, and Southwestern fans staked out the right-field line and corner. A handful of fans even watched from well beyond center field in the highest rows of the bleachers on the far side of the football field.

“It was such a huge advantage for us,” Boyle coach Brian Deem said. “That’s something I don’t think a lot of people understand about what we do here at Boyle County: We want to see everyone be successful.

“All the credit to Big Rebel Nation. They showed out tonight. The crowd, you could tell a lot of them hadn’t been to a softball game. They weren’t really sure when to get loud and when not to, but at the end of the day it was an incredible environment.”

It was also an unusual environment, and Boyle players said they were at first taken aback.

“It’s a little nerve-wracking, honestly, because they’re all out here watching us play,” White said. “But it was a good feeling to know that they were behind us and cheering for us.”

Boyle’s road to a repeat was not without potholes. After losing five seniors from a team that reached the state quarterfinals, the Lady Rebels lost six of their first 14 games this season against an arduous schedule.

“We spent longer this year trying to find our routine and our rotation, but once we found it, it just started to click,” Deem said. “They … realized that it wasn’t about a record, it wasn’t about being undefeated or anything like that, it was just about getting better. Once they finally bought into that and believed that the process was going to help, you saw a great change in them.

“We’re battle tested, and I thought it showed tonight.”

The Lady Rebels trailed twice, 1-0 in the first inning and 2-1 in the second. Then they sent 10 batters to the plate in the bottom of the second inning, using five singles and two errors to score four runs that gave them control of the game.

“It started out really tough, and that kind of just set a fire underneath us, so we wanted to win this game even more,” White said.

The biggest play of the inning came not on a hit but on a ground ball off the bat of White. Pinch-runner Havannah Maddox scored from third ahead of a play at the plate, and a throwing error allowed Courtney Sandy to score from second base and White to circle the bases.

Ray, White and Tipton each had RBI singles in the third inning to give Boyle an 8-2 lead.

The Lady Rebels tacked on an unearned run — their fourth of the game — in the fourth inning on an RBI single by Luttrell, and Tipton and Luttrell each singled home runs in the fifth.

White went 7 for 11 with eight RBIs and Ray went 7 for 12 from the leadoff spot in three tournament games in which Boyle outscored its opponents 36-3.

Katie Qualls was 5 for 7, Kennedy Qualls was 6 for 10 with four RBIs, Tipton was 5 for 9 with five RBIs and Luttrell was also 5 for 9 in the tournament.

In the pitcher’s circle, White gave up five hits in the first two innings against Southwestern but only one thereafter.

She pitched all 16 innings of Boyle’s three regional games, and the two earned runs she allowed Monday were the only ones she gave up. She allowed eight hits and two walks and had 18 strikeouts.

“I was trying to spin my ball and it wasn’t moving the best tonight, so I just had to hit spots and get mishits, because I knew my defense was behind me and they were going to make the plays that we needed,” White said.

Boyle is 25-3 in regional tournament games over the past 10 seasons. It won its first regional title in its second season of residence in Rebel Stadium, which was resurfaced with artificial turf in 2010, and its time there has encompassed the most successful period in the program’s history.

“I remember playing coach-pitch and coming to watch some games. I would just always get so inspired that one day I was going to grow up and I was going to be playing on the same exact field,” Luttrell said. “It was just great to be able to step out on this field just like I’ve always watched.”

“To see all those kids coming back (for this game says) we’re doing something right here. We need to continue it and stay the course,” Deem said. “These kids believe in what this program represents, and I’m just proud to be a part of it.”

Boyle went 112-37 (.752) in 11 seasons on the field it shared with football, soccer, marching band and other activities. A softball-specific field will be built elsewhere on campus before next season.

“Knowing that we’re moving to a new facility, I’m just so grateful to the community and the school board and the superintendent to get that through for us. But I kept telling the girls, ‘We need to send this turf off on the right foot.’”

The Lady Rebels did exactly that, making a few more memories on their way out.

“I’ve been coming to this field ever since I was in sixth grade, so it’s always been a place that I can play on,” Luttrell said, “and to end the season with a big win on this field is probably one of the best feelings that you can have.”