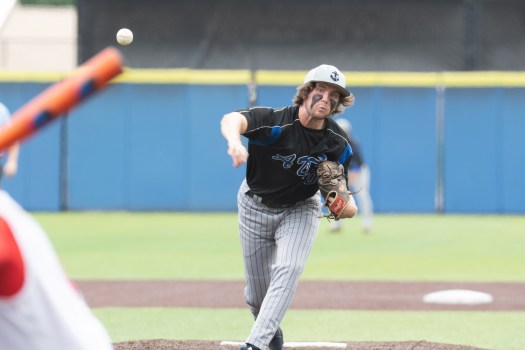 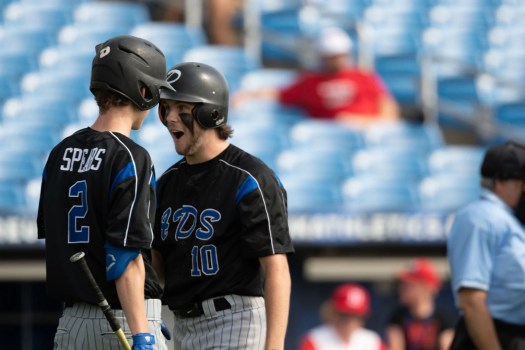 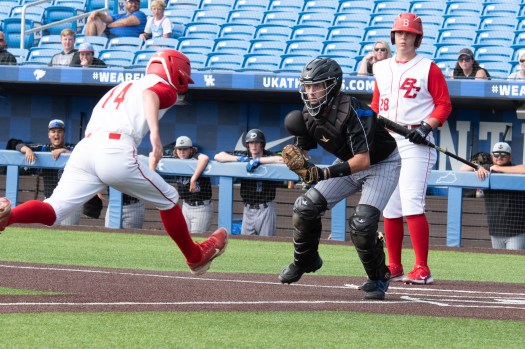 Brady Morse ready to tag out a runner at home plate at the Ads vs Boyd Co. game @ State. Photo by Chris Zollner 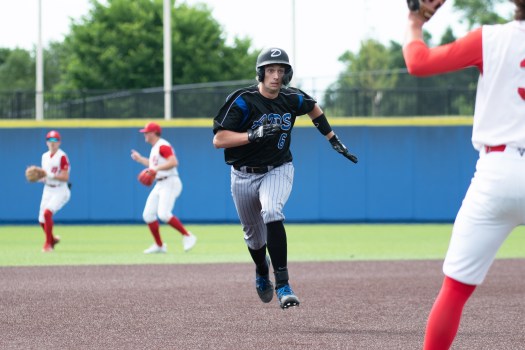 Brady Morse legging out a triple at the Ads vs Boyd Co. at State, 2022 . Photo by Chris Zollner 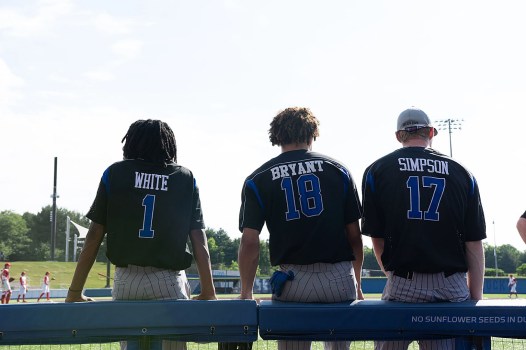 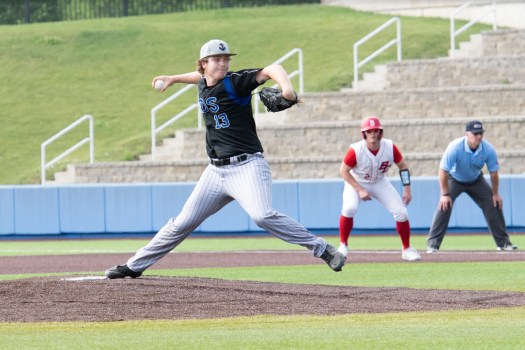 Brady Baxter throws a pitch during the state tournament. Photo by Chris Zollner.

Through wins and losses, through hot streaks and cold spells, the Danville Admirals always seemed to deliver on offense.

Danville’s offense dried up at the worst possible time Thursday, as the Admirals managed only one hit in a 3-0 loss to Boyd County in the first round of the KHSAA State Baseball Tournament.

The Admirals’ season ended with their first shutout loss in 88 games, taking with it the dreams of playing for a state championship that many of them had cultivated since childhood.

“I just feel bad for our seniors,” said Danville coach Paul Morse, who has coached most of the team’s seniors for 10 years. “It’s a great group that’s been together for a long time and done a tremendous job.”

When Brady Morse launched a ball into the right-center field gap for a first-inning triple, he couldn’t have imagined that would be the only hit his team would get during their day at Kentucky Proud Park.

“I thought that would fire our boys up,” the coach’s son said.

But no other Admiral got a hit off Boyd senior Jake Biggs, and few even put the ball in play.

No. 7 Danville (30-9) didn’t get another ball out of the infield and struck out only 11 times against Biggs, who walked one batter, hit two with pitches and saw one reach base on an error.

“It wasn’t one of our best days, for sure, at the plate,” Paul Morse said.

Boyd (26-9) had no such issues. The Lions got nine hits off Danville pitchers Brady Baxter and Logan Smothers to win their first state tournament game since 2005.

Danville had hopes of advancing in the bracket for the second straight season — the Admirals reached the semifinals last year — with a team led by nine seniors who had played together on school teams and summer travel teams for more than half of their lives.

“Dad groomed this team from 8U to where we are now. We love each other, the seniors that graduated last year and the ones now,” Brady Morse said. “We’re going to miss this.”

Danville entered the tournament averaging 8.4 runs and 9.0 hits per game — it ranked in the top 10 in the state in both categories — and had scored in double figures 14 times this season.

“It was a bad day not to bring your ‘A’ game, which was disappointing to see,” Paul Morse said. “To have a whole group pick the same day to do that is pretty strange.”

Brady Morse, Danville’s leading hitter on the season and the 12th Region player of the year, was at a loss to explain the Admirals’ inability to hit.

Across the field, Biggs said he had a simple plan for managing Danville’s dangerous lineup.

“Throw strikes,” he said. “I had my defense behind me, I knew they’d make plays and I just wanted to throw strikes and let them put the ball in play.”

Danville did that only 10 times in 25 plate appearances. Among the many statistics and trends the Admirals’ staff tracks is quality at-bats, which includes not only hits but also things like hard-hit balls, working counts and advancing runners, and Paul Morse said there weren’t nearly enough of those.

“Your goal is to shoot for 14 (in a game), and usually if you get to 12 or 14-plus, you’re going to win the game,” Paul Morse said. “We had three today, so that tells you how bad we were offensively.”

While Danville was struggling to get runners on base, Boyd was putting men on running the bases with reckless abandon.

The Lions had runners on base in every inning, and they would have scored even more runs if the Admirals hadn’t thrown out four runners on the basepaths, including three at home plate.

A delayed double steal resulted in a runner being retired at home in the first inning on a throw from Baxter to Brady Morse, another runner got caught between third and home in the second and was retired on a throw by Smothers, and a third was gunned down by Sam Matherly while trying to take an extra base in the third.

The latter of those plays came after Luke Preston doubled to drive in Brad Newsome with Boyd’s first run.

One inning later, consecutive two-out singles by Michael Potter and Newsome gave the Lions a 3-0 lead.

Biggs stranded two Danville in its half of the fourth inning, the only time the Admirals had more than one runner on base at a time.

They had one last baserunner in the seventh inning when Preston Barnes was hit by a pitch for the second time, but Biggs got a groundout and a strikeout to end his 95-pitch complete game.

“He was hurting at the end, and he just had to make pitches and he did that,” Conley said.

Danville’s seniors leave with a 104-20 record over three seasons — the 2020 season was canceled due to the COVID-19 pandemic — and had three 30-win seasons, three 45th District titles and two 12th Region titles.

“There’s never been a group at Danville (like them),” Paul Morse said.

“They don’t have anything to hang their heads about. They’re just disappointed in their performance today, and I understand that and feel bad for them for that. Life lessons are learned, and you’ve got to be ready to meet challenges, and we didn’t do that today. But the sun will come up tomorrow.”