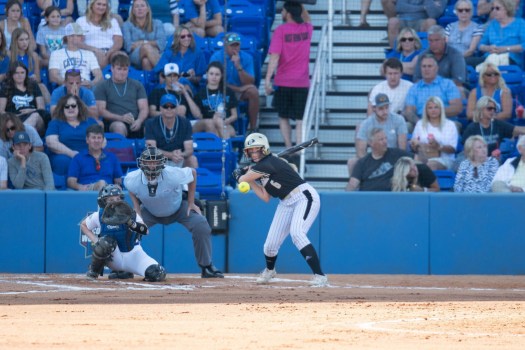 Boyle County’s Ella Coffey stares down a pitch during the second inning of the Class 2A state softball tournament. Photo by Chris Zollner 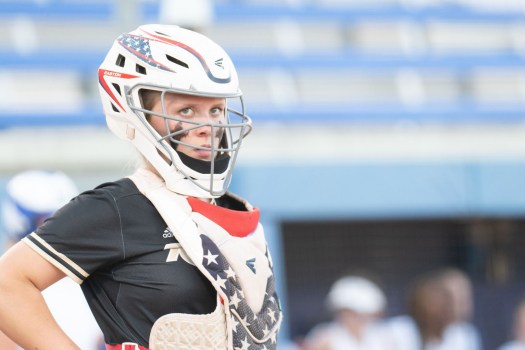 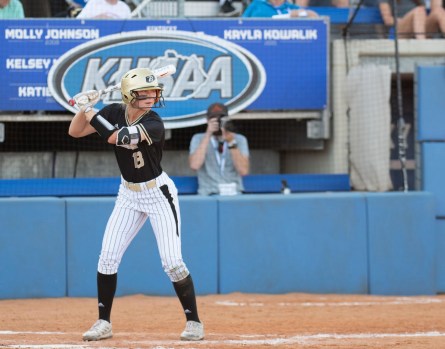 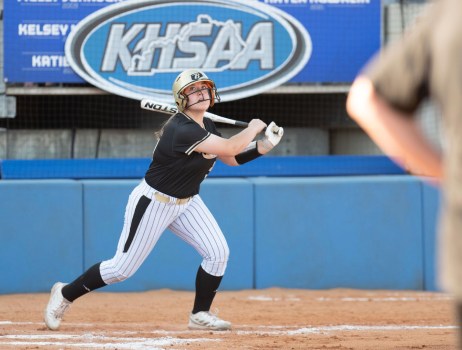 For every team that celebrates a walk-off win, a last-second shot, a game-winning field goal, there is another team on the wrong side of the chaos.

That’s where the Boyle County Lady Rebels found themselves Friday night, watching in stunned silence as their opponents celebrated an improbable victory.

It was a scenario they surely hadn’t imagined moments before Lexington Catholic came from behind in its final at-bat to beat Boyle 2-1 in the first round of the state softball tournament at UK’s John Cropp Stadium.

The Lady Rebels were poised to celebrate a state tournament win, but instead faced a heartbreaking end to a season that culminated in their fifth consecutive state tournament appearance and to a game they were two outs from winning.

“I haven’t felt like this in a long time,” Boyle coach Brian Deem said. “This one hurts.”

Boyle held the slimmest of edges in a compelling pitchers’ duel before Lexington Catholic flipped the script by scoring two unearned runs on three errors in the bottom of the seventh inning.

“My kids played hard, my kids fought their tails off,” Deem said. “We played fantastic defense. We just got a little wrapped up in the end.

“The game’s a cruel game, and you’ve got to find ways to finish, but we’ve also got to make sure that we score more than one run, too.”

Precious few runners reached base in the first 6 1/2 innings against pitchers Kayleigh White of Boyle and Abby Hammond of LexCath, who allowed only four hits between them.

The Lady Rebels scored an unearned run in the fourth inning and made it stand up until the seventh, when Lydia Kennedy singled to left field to cap an unlikely rally.

“I just told them to keep fighting,” LexCath coach Emery Emmert said. “That’s what we do: Fight, fight, fight ’til it’s over. I said, ‘Everybody needs to want it. … Want your moment, and it’ll happen for you.’”

LexCath’s Ava Emmert reached second base on a throwing error to open the inning, then moved to third with one out when Kinley Willoughby reached on a fielding error.

Kennedy’s hit was enough to score Emmert, and when the ball was misplayed by two outfielders, Willoughby came around from first base to score the winning run.

“The stage sometimes can swallow you up … and it’s just unfortunate that these things happen,” Deem said. “It doesn’t define what our program is or who we are, and … at the end of the day our program took another step forward.”

Boyle is now 11-11 in seven state tournament appearances — all since 2012 — and this was the first time it failed to win at least one game in the tourney.

White kept the Lady Rebels in the game by holding LexCath to three hits and one walk and striking out six batters.

“She was fantastic,” Deem said.

White drove in her team’s only run In the top of the fourth inning with its only hit, a single to right field that scored Courtney Sandy, who reached on an error and stole second base.

Her fortunes took a turn in the bottom of the inning, though only briefly, when a line drive struck her on the left shin. Deem said there was no doubt she would remain in the game as long as Boyle’s trainer gave his approval.

White retired the next eight LexCath batters as she went toe to toe with Hammond, who struck out 12 Boyle batters and twice retired the side on strikeouts.

Only four Lady Rebels reached base, two of them on errors. The Lady Knights had only six baserunners.

White had allowed 11 runs on 10 hits in four innings in Boyle’s regular-season loss to LexCath, while the Lady Rebels had four hits off Hammond.

Deem said he thought Boyle’s hitters would fare better in the rematch.

“I felt like (we could have success) if we could get to her early in the count, but she just did a good job spotting it and kept us off balance,” he said.

Boyle lost half of the starters from their team that reached the quarterfinals a year ago, then lost six of its first 14 games this season in the early weeks of a brutal schedule that included games against 10 teams that ended the season ranked in the top 25.

Deem said he’ll remember the way his team fought through difficult days to return to the state tournament.

“These kids didn’t quit,” he said. “It’s a horrible way for it to end, but I’ll remember how these kids fought through the adversity.

“We put them through a brutal schedule, and they can go ahead and buckle up and get ready for another one next year, and hopefully we can come back and maybe advance a little further.”