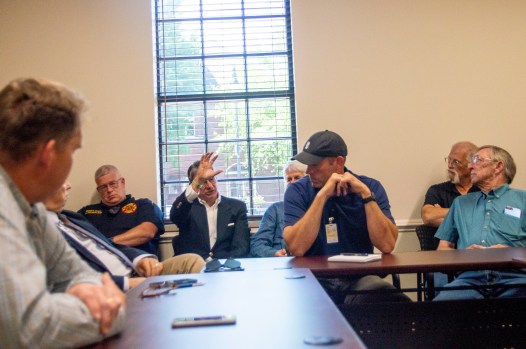 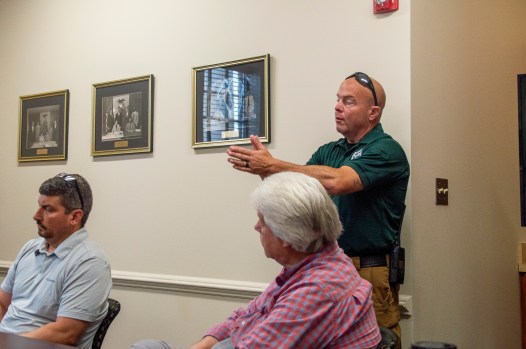 Boyle County Sheriff Derek Robbins said the lack of having all departments present at a drill would better prepare them for a real-life emergency. Photo by Jared Darwish. 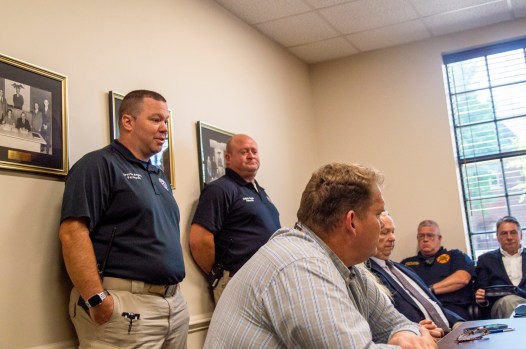 By: Fiona Morgan and Jared Darwish

In light of the recent school shooting in Uvalde, Texas, local first responders and government leaders had a meeting on May 31 to discuss how Boyle County can better prepare for possible emergencies, like shootings.

Danville Mayor Mike Perros led the meeting in Danville’s city hall to talk about current policies and what they can do more of.

The overall consensus of attendees was that emergency response teams have protocols in place and are prepared for an event such as what happened in Uvalde. However, many also felt that they could be doing more to further school safety, and discussed ways to do so.

Hunt mentioned some small ways each department can improve on their emergency drills. Robbins said he believed they should have active shooter training for all first responders every month.

Simpson said the fire department would not have time to do training every month, and other department heads said the same. In rebuttal to this, Robbins said departments should attend only if they’re able to, and mentioned how in real situations, not all departments will be on scene in full strength.

“The key to doing those drills is you can’t be afraid to fail during the drill,” Robbins said. “We can set up a drill and everybody looks like rockstars, but we’re not accomplishing anything.”

Rogers agreed with him, saying, “Drills happen so infrequently, and I want to get as many EMS providers as I can in there to experience that in the moment, but what ends up happening is now you have an unrealistic drill because now you’ve got 14 trucks there at once.”

Robbins said the lack of having all departments present at a drill would better prepare them for a real-life emergency.

“It’s okay to fail during that drill, and we figure out what we did wrong and how we make it right so that if it did happen, it minimizes the damage that somebody can do,” he said.

School board members suggested that all first responders take walkthroughs of each school to become familiar with their layouts. The first responders present agreed, saying many of them have not walked through the schools recently, and some have never been to some of the schools.

Robbins suggested creating a standardized layout for first responders that would number each hallway and classroom the same way for all schools. This would help all responders find their way around each school easier in an emergency.

School board members also brought up the importance of keeping doors locked at all times, and never to prop open doors, to prevent the initial threat of a shooter.

A law passed recently that all school campuses must have a safety resource officer. The Boyle school district has two, but are looking into funding for the other two positions.

Perros said Caldwell is the “tip of the spear” in creating plans for these emergencies. Caldwell is currently working on updating the emergency plan, which the county is required to update yearly.

Caldwell and school board members will be working with responders to give everyone walkthroughs of each school.

School board members and first responders alike brought up that there needs to be more training at Perryville, since Perryville Elementary is the farthest school away for most responders in the county.

Caldwell said they will be leading a drill for Perryville before the next school year starts.

Throughout the meeting, Perros stressed the importance of reporting to authority when people see or suspect anything, because it could help stop a future threat.

In response to this, school board members spoke on the need to continue encouraging parents to be more involved in both reporting potential threats, and knowing protocols for emergencies.

Boyle County schools have a tip line called the STOP Tipline. According to their website, people can “Report an unsafe situation in one of our schools (bullying, drugs or alcohol, violence or other risky behaviors). We will get to your issue within 24 hours of the next school day. This service is NOT for emergencies requiring immediate attention. If you or someone you know is in immediate danger, please call 911 immediately. If you want someone to contact you regarding the situation, be sure to leave your contact information in the report. Otherwise, the report is anonymous.”

The leaders present agreed to continue discussing emergency preparedness, and will schedule other tactical strategic meetings.

“I’ve done all the scenarios, and there is no prep,” Ross said. “At least if we know where we’re supposed to be and we know our job responsibilities, it will create a lot of peace in the midst of the chaos.”