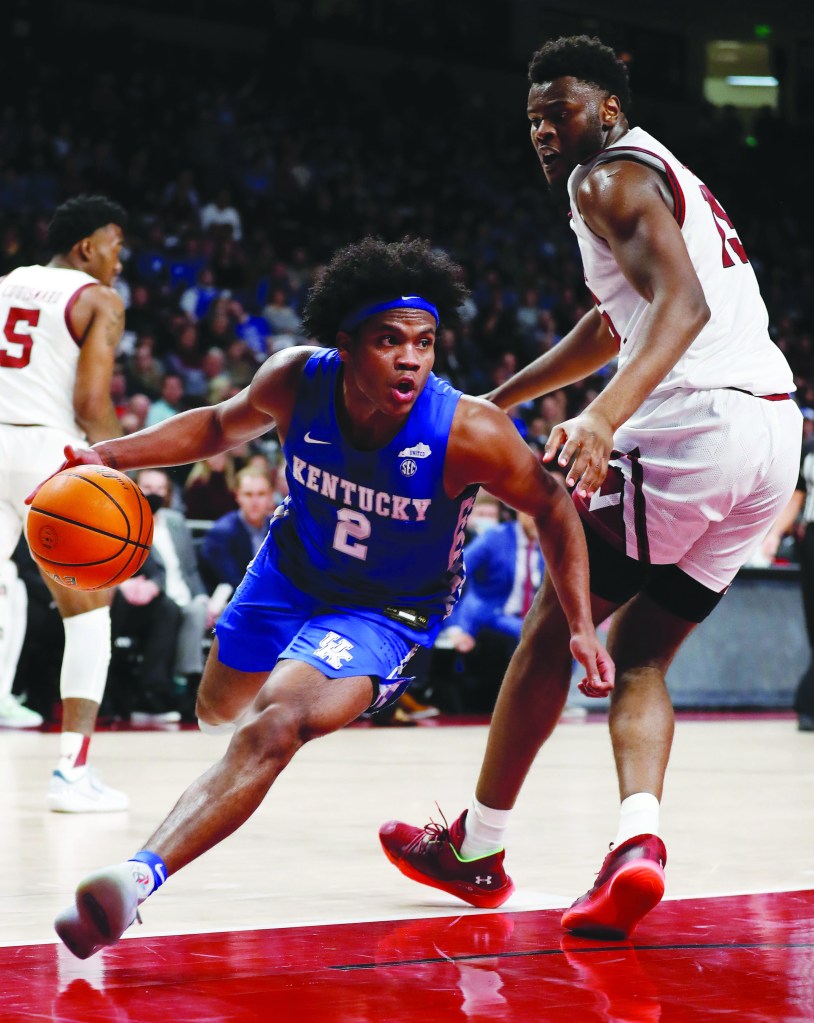 “We’ve got some really good guys coming in,” said Wheeler last week during a Players First Camp at Boyle County High School. “We’ve got some guys back. Just super big opportunity for me to play for Kentucky again.

“It feels like again it’s going to be a really good team (and) a special group. I’m looking to build on what we did last year for sure.”

Wheeler also talked about the NCAA Tournament loss, his shooting, assists and more.

Question: Were there any lessons learned from the NCAA Tournament loss to Saint Peters?

Wheeler: “Yeah, but that is all behind us now. It is what it is. It was unfortunate, but it is a new year, new season, new teammates. I am super, super excited to get on the court and mesh with those guys.”

Question: How long did it take to put that loss behind you?

Wheeler: “It took some time. It’s a loss. Any loss for me, it takes some time. Obviously, NCAA Tournament game, first round, it stung a little bit. I am not going to get too much into it because it is behind us. We are in the summer now with a brand new team. It’s a new year and I am super excited and super grateful to be in this position to play for Kentucky again.”

Question: What are you working on?

Wheeler: “Everything. Everyone works on shooting. Definitely try to get better. I increased everything. My field goal percentage (39.9 to 44.1). My free throw percentage (73.8 to 78) . My 3-point went up 10 percent (actually 22.5 to 30.8) from my sophomore year to junior year. I shot over 40 (percent from 3) in league play, so obviously some struggles midseason but you can’t become an elite shooter overnight. It takes work. You are going to have the ups, you are going to have the downs until you get it just right. I was working with (former UK graduate assistant) Brad (Calipari) and all the coaches and by the end of the year I felt really comfortable with it. I was making shots. I am building on that and having fun while I am doing it.”

Question: What about other things even though you did lead the SEC in assists with 207, fourth most in a single season by a UK player, with an assist to turnover ratio of 2.3 to 1?

Question: Do you feel you proved what you said last summer about being a better shooter than people believed?

Wheeler: “Everyone is a number’s guy now. We have statistics, we look at analysts. Looking straight at the numbers I was better. Field goal, free throw and 3-point shooting. It takes work and I have had some success making shots. I have also had some not so much success to where I have to remind myself to still get in the gym. I am in a really comfortable place right now. I am super excited to get out there in front of the fans and play in front of the best fanbase and obviously continue to rack up wins.”

Question: How many shots do you put up in a typical day?

Wheeler: “Since the season has ended, 500 makes. I do it twice. I go in the morning and it will be 500. In the evening 250 whether 3-pointers or mid-range pull-ups. I am keeping track of how many I am making but also what kind of shots I am taking. It is not always going to be stand still, wide open. Sometimes it is going to be on the move and off ball screens. I am putting myself in various situations where I know I have to make shots.”

Question: How long does it take to make those 500 shots?

Question: So do you know more about what to expect from Calipari on the court running the team, off the court or both?

Wheeler: “Just building that connection with coach Cal. We have a really strong relationship. I can talk to coach Cal about anything whether it is basketball related or not. He is my guy. Just having a year building a relationship continuously and having that strong foundation is crucial, especially coming to a second year when you know you felt like you had the team to win it last year and kind of fell short. I have some motivation behind that and I know he does, as well. He is constantly pushing me to be the best player I can be and I am grateful for that.”

Question: Will he still yell at you for making turnovers this season?

Wheeler: “That’s coach Cal. I wouldn’t want it any other way. If he was not yelling at me for a turnover, to me that shows he doesn’t care. As long as he is yelling at me for making a turnover and also cheering me on when I do well, which he does, I am all for it.”

Question: What do you know about Cason Wallace and what was your first day like with him on campus?

Wheeler: “It was good. I know he is from Texas, and he is not going to be too hard to adjust to. I am familiar with playing with guys from Texas. We all have a similar playing style as far as being aggressive, being the aggressor, playing downhill and also being unselfish. I don’t think there is any guy from Texas who has been selfish. I think we are going to get along good from meeting with  him and chillin’ out with him. It was fun. It was great vibes. He was kind of to himself but as the day went on finally got him to open up and laugh a little bit. I think some of it was having those ties with Daimion (Collins) allowed him to be more comfortable than maybe he would have been. It has been great to see him and meet all the new players. I am looking forward to the season.”