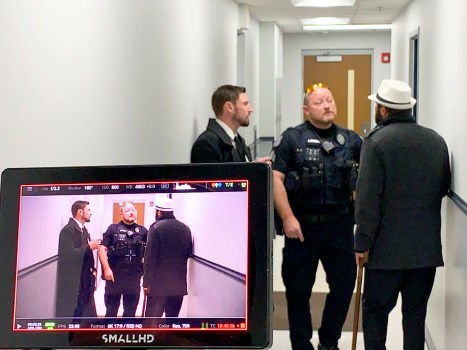 Danville Police Officer Aaron Rainwater made a guest appearance in “Murder by Association.” John Wells and Keith Migra, who play the two detectives, filmed with Rainwater at the Danville Police Department on May 4. Photo submitted. 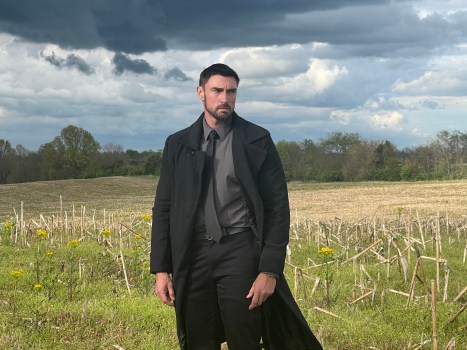 Kentucky native actor John Wells, who plays Detective Hall in the film, stands in a field at The Farm LLC in Danville. Unexpected storm clouds gave the filming location an eerie feel, which fit the mood of the movie. Photo submitted. 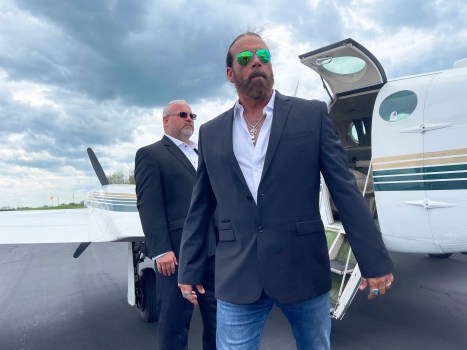 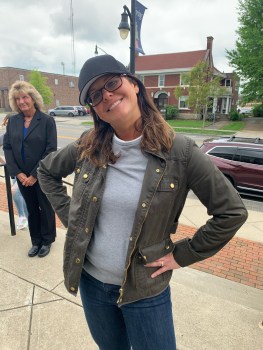 Local film-makers recently filmed an independent movie called “Murder by Association” at a few locations in Danville. Local citizens made guest appearances in the movie.

The main filming location was The Farm, LLC on Waterworks Road in Danville. The Farm hosts guests in its bed and breakfast, hosts events, and is a working farm. They filmed there in late April and early May.

As the name might suggest, “Murder by Association” is a mystery about a murder that takes place on a family farm. Billionaire Harlan McLean is killed on his wedding night, and all the house guests are suspects. Detective Hall, played by John Wells, and Detective Thomas, played by Keith Migra, are called in to investigate.

Director Whit Whitman said he wanted something local for his main filming location. He thought The Farm was a perfect spot to utilize, and said it was beautiful for filming.

Other filming locations included the Danville Police Department and the Mount Sterling Airport. Danville Police Officer Aaron Rainwater made a guest appearance filming with the two detectives, Hall and Thomas.

Whitman said the cast and crew were wonderful to work with in filming. Frank Joseph Pulciani, who plays Harlan McLean, said he was honored to work with Wells, who has been in over 100 films.

“[Wells] is one of the best actors I’ve ever worked with in my opinion; it’s really exciting just to be a part of this,” Pulciani said.

The film is in post-production, and is scheduled to come out in the fall of this year. Whitman said he hopes to get it distributed on streaming networks.

“I look forward to doing many more films in Danville, Kentucky; we keep growing our actors and crew from local areas and other states,” he said.

Whitman explained that in January, Kentucky started a new incentive program for film-makers. If local production companies spend more than $125,000 on a film, Kentucky will give 35% tax credits in all counties except Louisville and Lexington, where it is 30%.