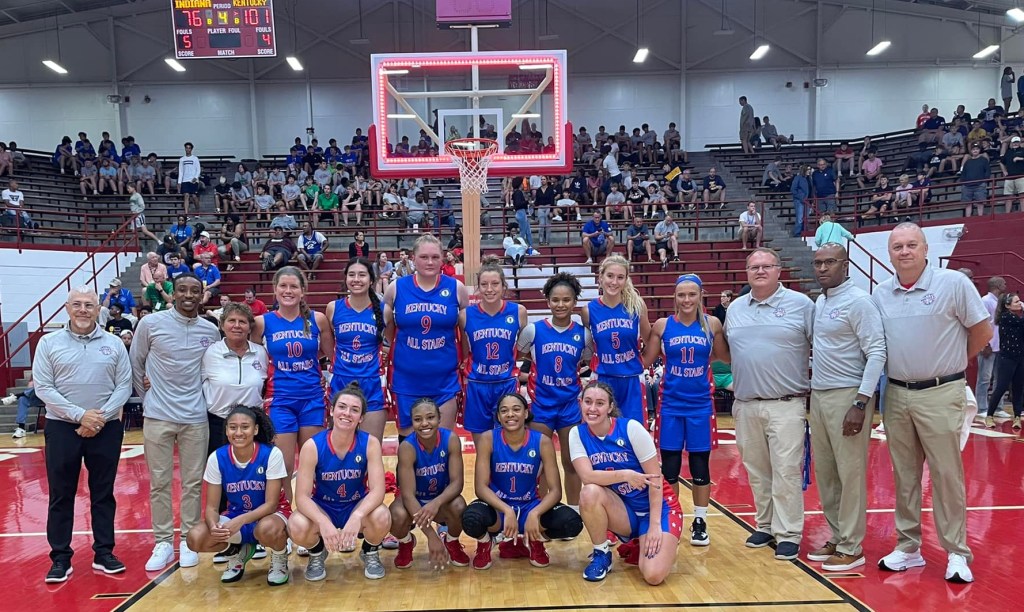 Danville’s Judie Mason, back row, third from left, coached the Kentucky All-Star girls to a win over Indiana on Saturday in Indianapolis. The Kentucky stars, who went 1-1 in the two-game series. Photo from Kentucky All Stars via Facebook

The video clip is only seven seconds long, and Judie Mason is seen for maybe three seconds of that. But that was enough to give you an idea of what an all-star victory meant to her.

The scene shows the Kentucky All-Star girls in full celebration mode in their locker room Saturday night following their win over their Indiana counterparts.

And right in the middle of the mayhem was Mason, the Danville coach who was their coach for the all-star series, jumping up and down and grinning as broadly as anyone in the aftermath of the Kentucky stars’ 101-76 victory in Indianapolis.

“Just feeling that, it was fun, to have those kids celebrating that are going to UK and Western (and other schools),” Mason said. “All those girls felt like they won their last high school game.”

Mason said the video, captured by an assistant coach, shows not only how much the all-star experience meant to her, but how much the game came to matter to players who had come together only the day before to form a team.

“We’re representing Kentucky, the whole state, and I think this team, these girls took that to heart,” she said. “To make them bond in the little amount of time we were together, that’s fun. They just all bought in.”

The night before, the Kentucky girls lost a 67-66 decision in the opener of the two-game series. And it was on the morning of that game that the team came together for the first time in Owensboro.

“And I think they really realized, too, on Friday how big a deal it was,” Mason said. “You don’t know what it is until you get there. Saturday they proved why they were on the all-star team, I got to sit back and be a fan, and I enjoyed it.”

Kentucky dominated the boards in its win, outrebounding Indiana 67-49, and compiled 26 assists on 38 field goals after getting only nine assists in its loss Friday.

There were a few practices prior to Friday, but the entire roster wasn’t in the same place at the same time until a few hours before their first game.

“I think the first game we were all just trying to figure out who we were, even the coaches,” Mason said. “It never felt comfortable on offense or defense the entire time (Friday). We just battled.

“I said, ‘We don’t need to run sets, just create plays.’ We ran it, and they just had fun and made plays and didn’t worry about trying to run a set.”

Amiya Jenkins of Anderson County, Kentucky’s Miss Basketball and one of two Kentucky signees on the team, had 31 points on 9-of-18 shooting and eight assists to lead her team just hours after an auto accident that could have taken her out of the game.

Mason said Jenkins and her mother were in a car that was totaled in a crash while they were en route from Owensboro to Indianapolis. Jenkins was unhurt but in need of alternate transportation, and she arrived at the gym just as the players were being introduced.

“She came out and had an air ball and two turnovers, and then she just put on a show,” Mason said.

Gracie Merkle of Bullitt East ruled the interior with 29 points on 13-of-21 shooting and 14 rebounds.

“We went to her a lot because she was on Saturday night,” Mason said.

There were 11 lead changes in the Friday game, in which Kentucky rallied from a seven-point deficit to take a 66-65 lead with 16 seconds to play, only to lose when Indiana’s Alyssa Crockett, a Michigan signee, got the game-winning layup with 2.2 seconds left.

“We let one slip away Friday night, and the girls were disappointed in that,” Mason said. “But we came back, and, wow, they really played.”

The 101 points scored Saturday by Kentucky tied its highest single-game total in the series, which began in 1976, and the 25-point win represented its largest margin of victory since 2012.

In recent years, some all-stars on both sides of the Ohio River have skipped the series because of commitments to their colleges, and some did this year, but Mason said she is grateful that Kentucky coach Kyra Elzy and the other college coaches for whom the Kentucky girls will play didn’t stand in the way of allowing them to play in the all-star game.

“We need to make it important,” Mason said. “I don’t think people across the state realize how big it is and what an opportunity it is to support our kids.”

Mason said it was important to her as well.

“It’s a big accomplishment for me, being from eastern Kentucky, to coach in the Kentucky-Indiana All-Star game,” she said. “I appreciate the opportunity. I had chill bumps.”

Mason also said she appreciated that one of her Danville assistant coaches, Tryston Ford, had the opportunity to join veteran coaches on the all-star staff in the early stages of his coaching career.

“He probably had as much fun as anybody, and he doesn’t realize how lucky he was,” Mason said.

Mason said she counted herself lucky to be part of the all-star program as well.

“It was really an experience and a pleasure for me to be around those kids that love the game as much as I do and to watch them compete,” she said.