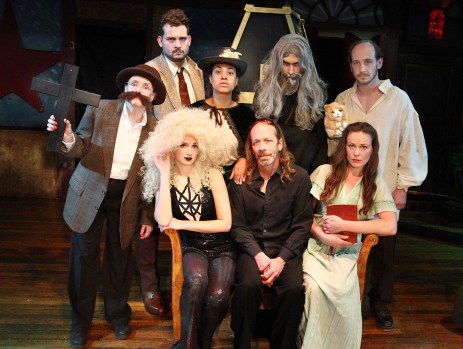 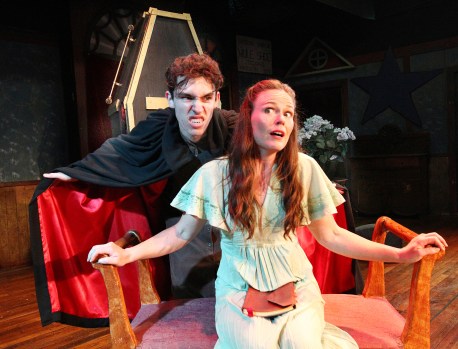 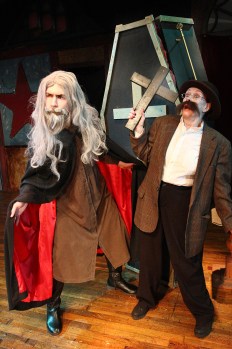 Jack Giglia plays Stewart Minor, and Patricia Hammond is theater owner Nattie Sills who must go on stage as the famous vampire hunter, Van Helsing when another actor fails to show up. Photo submitted 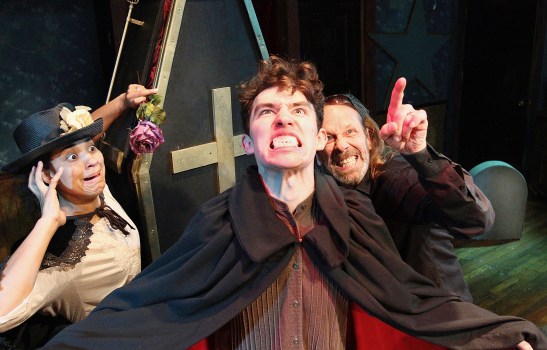 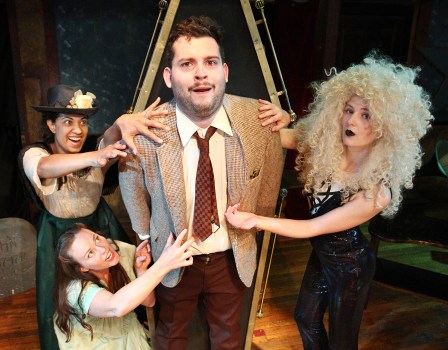 The performance of “Dracula Bites” made its premiere at the Pioneer Playhouse over the weekend. Opening night for the playhouse saw a packed house, with both new fans and older patrons filling the seats.

The show, which ran a tick more than two hours, had audience members engaged in the production from start to finish. The hard work put in by cast members and director Robby Henson’s powerful imagination was evident in the show.

Henson’s talent for directing was exemplified greatly, as it seemed like every character was made for their role.

The plot of “Dracula Bites” is centered around a play director at a small community theater who is given a cast of misfits and below average actors to perform the serious play of “Dracula.”

Throughout the show, play director Gregory Pastel, played by Bob Singleton, made a number of questionable decisions with his cast, which had the audience laughing uncontrollably.

One of the many questionable directing decisions made by Pastel, was his desire to have his Dracula character sound like he was 300 years old. Actor Jack Giglia, who played Dracula, excelled in the role. His ability to speak in a deep, creepy vampire voice, to please his director, was a big hit with fans.

By far the funniest part of the performance was the showcase of Pastel’s play. And just like in rehearsals, everything went wrong.

Whether it was missing lines, being on stage at the wrong time, or breaking stage props, the cast perfected the plot, where everything is meant to go wrong.

Dracula’s failed attempt to fly in the air from a zip line was by far the most engaging part of the show. The stunt had fans ducking and dodging as Dracula slowly and uncontrollably made his way down the aisle, dangling just inches above the crowd.

This had the audience on the edge of their seats, wondering what would go wrong next.

All in all, the debut for the Pioneer Playhouse was a success and went flawlessly in my eyes. With only 10 days to practice, I was thoroughly impressed with exceptional chemistry between all the cast members.

In a play where everything is supposed to go wrong, it was astonishing to me how the cast made no blunders outside of what was intended to go awry in the plot.

Other things that made the play a success was the playhouse’s stage lighting and sound system, which allowed the audience to hear and enjoy the production regardless of where they sat.

The only downside to this play is that it might not be family friendly or appropriate for all ages. Although few and far between, the play does make some sexual references and remarks.

Nonetheless, the exciting and unpredictable nature of “Dracula Bites” makes it a must-see for those who enjoy theater.