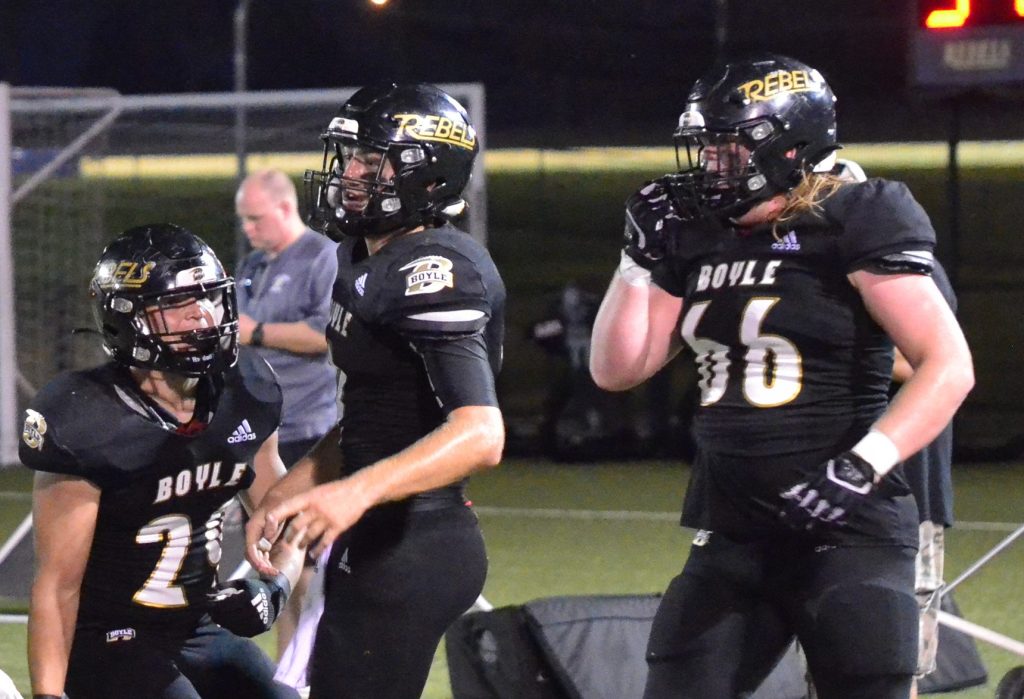 When Andrew Hardwick visited West Point, he quickly realized that it was unlike any other school he had seen — and exactly what he wanted.

Hardwick was enamored by the culture and the history of the U.S. Military Academy, as well as the idea of playing football for Army and how that could help his future.

So it was an easy decision when the Boyle County football and track and field standout recently announced he was going to West Point in 2023.

“It’s so different from any other school,” Hardwick said. “The interactions that you have with the coaches, the culture there is different. It just feels like you’re part of something bigger than yourself.” 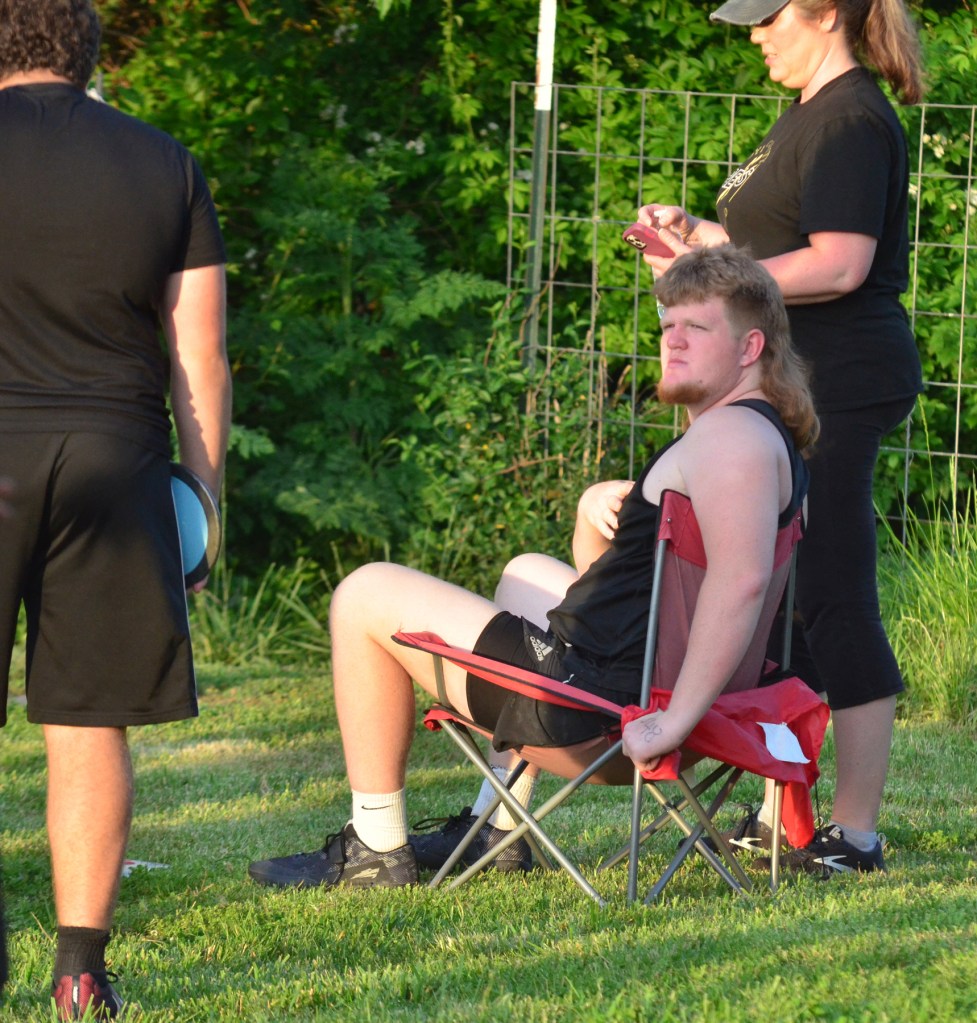 Andrew Hardwick of Boyle County keeps an eye on the competition as he waits his turn during the boys discus competition May 13 at the Central Kentucky Conference Championships. Photo by Mike Marsee.

Hardwick, an offensive lineman who has been an integral part of Boyle’s back-to-back Class 4A football championship teams and the defending Class 2A track and field champion in the boys shot put, announced his commitment to Army on May 5.

His senior season at Boyle still lies ahead before he joins the Black Knights, and before that he’ll have the opportunity to win state championships in the shot put and discus. But he’s already looking forward to getting to West Point.

“The place is awesome. I don’t know how else to explain it,” he said.

Hardwick has an appreciation for history, particularly military history, and he said that was one of the things he enjoyed most about his visit.

“I loved going there and learning about the history of how the fort was founded by George Washington, and it’s such a historic school for football,” he said.

“I think it would be nice to be a strength and conditioning coach, and I want to get a kinesiology degree,” Hardwick said. “(We) had a good conversation about careers … and I feel like West Point will give me a step ahead of everybody else in that field.”

The 6-3, 260-pound junior has started at offensive tackle for Boyle in each of the past two seasons, and he has also played on the defensive line. According to a story by Black Knight Nation, Army is recruiting him as a guard or center.

Black Knight Nation said that recruitment began when an assistant coach with Kentucky ties reached out to him in March. Hardwick visited West Point on April 2 and said he loved every minute of it, but he didn’t want to make a decision on the spot.

“I didn’t want to rush to make a decision … and I was taking some visits to other places,” he said. “But the more I thought about it, any reason I would have had not to want to go there would be just because I want to choose an easier route, but if I really thought about what’s best for me, I feel it’s definitely the best place for me to go. I feel like no other school in the country offers the same opportunities that West Point offers.”

“I think I could go to another school and it would probably be easier. Some people would enjoy something like that, but I want to see where I can push myself mentally and physically to be 10 to 15 years from now and what jobs and careers I want. I think that’s going to give me the best opportunity.”

Hardwick followed his older brother Isaac, a 2020 Boyle graduate, into football when he was a young boy.

“I always wanted to be just like Isaac. He always had a love for football and basketball, and growing up, anything he did I had to do,” he said. “When I was 3 playing flag football I was chasing grasshoppers on the field. I had no care at all; I just wanted to be out there.

“Once I got to about the fifth or sixth grade, that’s when I started to see that I had an opportunity to play somewhere. It became more about, ‘How good can you be?’ at that point.” 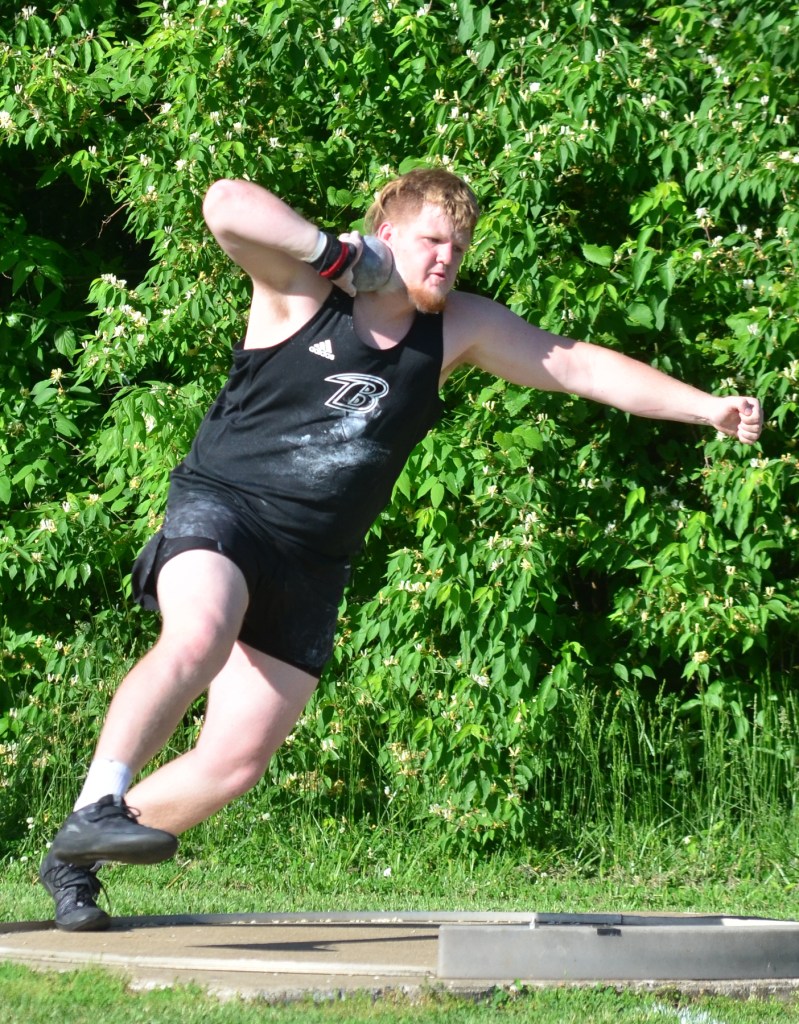 Andrew Hardwick of Boyle County makes an attempt in the boys shot put May 13 at the Central Kentucky Conference Championships. Photo by Mike Marsee.

He said playing at West Point will allow him to be part of something bigger than himself, and he said he already enjoys that part of football most.

“The main reason I love football is I love my team,” he said. “That’s what makes it so fun, all the times messing around in the locker room, all the friendships.

“Winning games is nice, but it’s winning with people that you like to play with, that’s what matters.”

Track and field is a different world for Hardwick, but he has come to love it as well.

“It’s just such a different place (than football). It’s a lot more calm, and I also like the personal competition,” he said.

Hardwick was convinced by his brother to give the throws a try following a football workout during his eighth-grade year, and he impressed former assistant coach Billy Moore, who worked with Boyle’s throwers, on the very first day.

“He said, ‘Make me a promise: Show back up tomorrow,’” Hardwick said. “After that I just kind of stuck with it. I didn’t even know what it was, honestly.”

He was a natural with the shot, not so much with the lighter disc.

A stress fracture that he discovered while playing basketball with friends delayed the start of his season  — it also kept him out of spring football practice — and he has been throwing for only four weeks.

“Some days I’ll go out in practice and I’ll throw better than I’ve ever thrown before, and other days I’ll be kind of bad. I have to get that consistency back,” he said. “I’m hoping that (with) a week off to focus on training I can get my consistency and my timing down, and I think I’ll be good to go for regions.”

Hardwick’s season bests in competition this spring are 51-1 in the shot put and 143-7 in the discus, though he had better marks last season.

He is looking for a shot put of around 55 feet in and a discus throw in the 150s in Boyle’s Class 2A regional meet is Monday at Mercer County’s Alvis Johnson Field and/or the state meet is June 3 in Lexington.

Hardwick said he enjoys friendly competition with some of the other top throwers in this part of the state, including Lleyton Penn of Mercer County, Hunter Coslow of Taylor County and Ethan Rice of Marion County.

“I would never talk to some of these kids playing football, but we watch each other throw all the time. We like to keep it personal in our competition to see who can beat who, see who can get a further mark,” he said. “It’s good fun, competing against friends.”

Hardwick is hard to miss on the field, with his long blond hair flowing when he throws or coming out of the back of his football helmet.

He knows the hair will have to go before he goes to West Point, but he said he hopes to cut it sooner than that. He said he had planned to cut it off after Boyle won its most recent football title, but he decided to wait in hopes of playing for one more state championship.

“I was going to cut it off on Kroger Field after we won, but I was like, ‘Well, if I cut it off and then we win the next year and I don’t cut it off then I’ll feel like I’ve missed out on something,” Hardwick said. “You’ve got to have the hair for all three state games, and then if we win cut it off.”