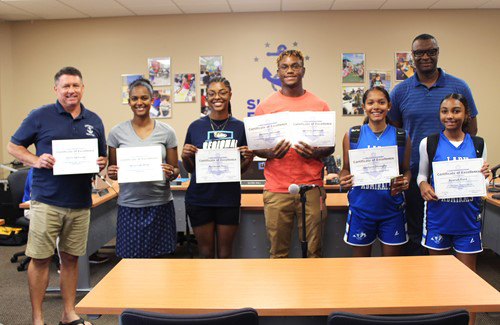 The Danville track and field team was recognized at the meeting. Photo submitted

The Danville Independent Schools Board of Education unanimously approved creating two new positions, a Director of Teaching and Learning and a Student Success and Equity Officer, at the recommendation of Dr. Greg Ross, whose start date as superintendent is July 1.

Ross brought the recommendation to the board at Monday’s meeting in hopes to address student achievement and opportunity gaps to better serve minority students, students who have a language barrier, students with special needs and/or disabilities, and students experiencing socioeconomic hardship. He said he wants to make sure every student has the opportunity to be successful, no matter where they come from.

Another important facet to these positions will be focusing not only on students but on teachers, making sure they understand culturally responsive teaching and learning, the impact of best practices and strategies, processes of intervention and support for at-risk students, and other understanding to best serve students.

“We’re just trying to shore up our ability to see success in every student and be proactive in making sure they have the skills necessary, and also to address the opportunity gap,” Ross said.

In terms of how to accommodate the cost to fill these positions, Ross explained that a couple of positions the district has that are currently open but do not expect to be filled are expected to offset the cost.

“We’re excited about this,” said Director of Arts Education Jane Dewey. “Our students in the arts — they’re as dedicated as any college and career pathway we have in the school, and they deserve this recognition. And the high school has been giving them recognition, but this allows us to take it a step further because this is a state-approved Seal of Arts Excellence.”

Additionally, the board took the time for student recognitions and certificates during the meeting. The Admiral baseball team and coaches were recognized for making it to the state tournament earlier this month, and the track and field team and coaches were recognized for their regional and state meet successes and for medals they received in relays and other competitions. The DISD congratulates these students and coaches. 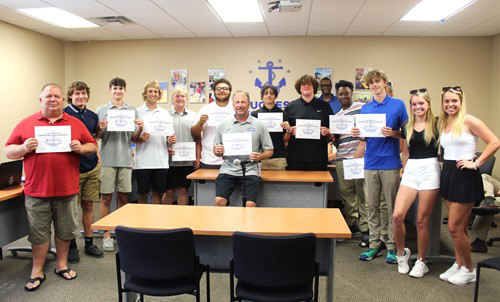 The Danville baseball team was recognized at the meeting. Photo submitted

• Unanimously approved the salary schedule for district employees for the 2022-23 year, which includes a $1 per hour raise for instructional assistants, cooks and bus drivers and a 5% raise for all other classified and certified staff. The board also unanimously approved an updated employee handbook, the only changes to which include updates to personnel, including the name of the new superintendent.