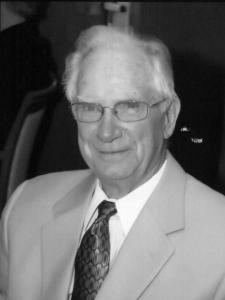 William Earl Adams, 97, died on June 24, 2022, in Danville. Earl was born in Rockcastle County, Kentucky on December 27, 1924, to the late James Benton Adams and Grace Thompson Adams. The family moved while he was still an infant to Lockland, Ohio where they lived for twelve years before moving back to Rockcastle County in 1937. Earl graduated from Broadhead High School. He attended Berea College from September 1941 to January 1943. He served in the United States Navy from 1943 until April 1946. Earl graduated from Eastern Kentucky University in 1948 with an AB degree and received a MA degree in 1949. In 1946 Earl married Lucille Scott. They had two sons, William Earl Adams, Jr. and Larry Scott Adams. Earl taught at Broadway Elementary School in Danville starting in 1949 and became principal in 1952. In 1957 Earl went to the Kentucky Department of Education as an Elementary Education supervisor. In 1961 he came back to Danville as principal at Toliver School until his retirement in 1985. In 1986 Earl began seventeen years of part time work at North Point Training Center as teacher and later guidance counselor. Earl was a longtime member of Danville Church of Christ. He is survived by his wife Lucille Adams; his sons William Earl (Madge) Adams, Jr. of Scottsdale, Arizona and Larry Scott (Joann) Adams of Clarksville, Tennessee; three grandchildren Christopher Adams, William B. Adams and Tabitha Conrad; three great grandchildren Gabrielle Adams, Henry Conrad and Olivia Conrad; and his extended family John and Annette Ransdell, Tori (Joe) Van Hook and Brody Van Hook. Visitation will be 10 a.m – 11 a.m. on Wednesday, June 29, 2022, at Stith Funeral Home, Danville, with a graveside service at 11 a.m. in Bellevue Cemetery with Rev. Scott Vifquain officiating. The online guestbook and our Hugs from Home program are available at www.stithcares.com.