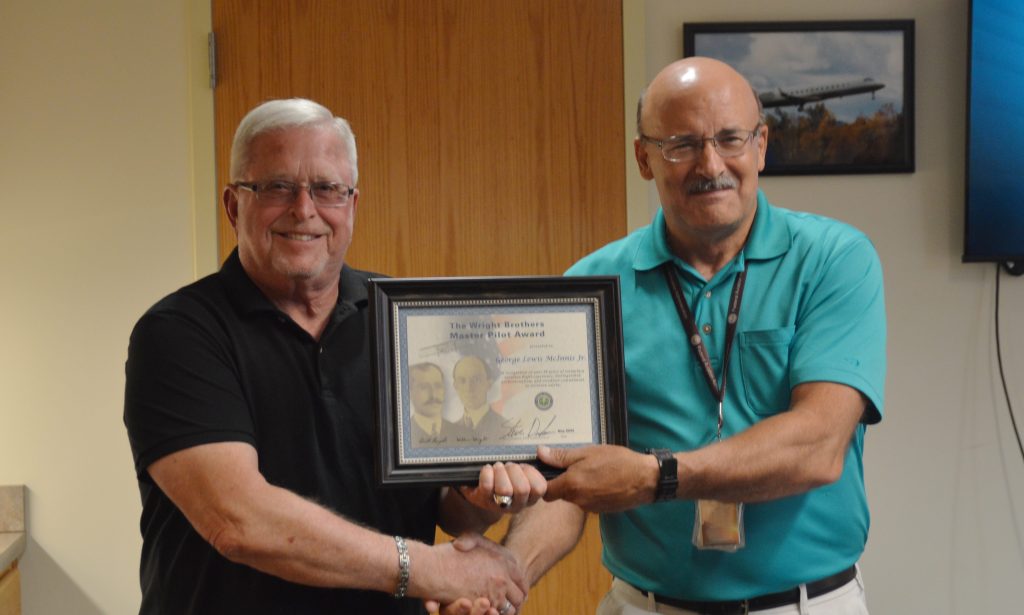 Retired law enforcement officer and former lieutenant with the Kentucky Department of Fish and Wildlife, George L. Mcinnis was honored recently with one of aviation’s most prestigious awards.

Chuck Holsclaw, from the Federal Aviation Administration presented Mcinnis with the Wright Brothers Master Pilot Award on Tuesday at the Danville-Boyle County Airport.

The achievement is one of the most prestigious honors in aviation and is only given to a few pilots yearly. To qualify, a pilot must have 50 years of flying privately or commercially without an accident or revocation of their license.

Mcinnis, who flew his first solo flight in 1965, has more than 57 years of accident-free flying. During his years in aviation he worked for Kentucky Fish and Wildlife while also serving as a police officer in Casey County.

Mcinnis performed a number of duties in his time as Lieutenant for Kentucky Fish and Wildlife such as conducting waterfowl surveys on the Ohio and Mississippi rivers, surveying for commercial fishing, and missions of relocating fish and restocking wildlife.

During his years as a pilot, he’s flown more than 15 different aircrafts and has accumulated more than seven thousand hours of aviation time in the cockpit. Mcinnis spoke on his comfort level of aviation experience.

“It’s as natural to me [getting in an airplane and flying] as it is getting in a car and driving,” he said.

Mcinnis, says he got his love and passion for aircrafts from his late father, who flew for Delta Airlines for 46 years. At the age of just 16 years old, Mcinnis began taking lessons thanks to encouragement from his father.

Mcinnis grew up in the Delta hub of Atlanta, where he began learning to fly. Just a few years after his first lessons, he went on to attend Middle Tennessee State University’s flight school and graduated with a certification in Commercial Aviation in 1968.

During the next couple years he would go on to obtain his instructor certification as well as receive his instrument and multi-engine ratings in May 1970.

“A once-in-a-lifetime opportunity” Mcinnis said. “It’s such a blessing that I have made it this far.”

Friends and family filled the room during the ceremony and told stories of their years flying alongside Mcinnis. After receiving the award, Mcinnis thanked everyone involved and said the day is one he will never forget.

In the future, Mcinnis plans to continue flying and enjoying his years of retirement.