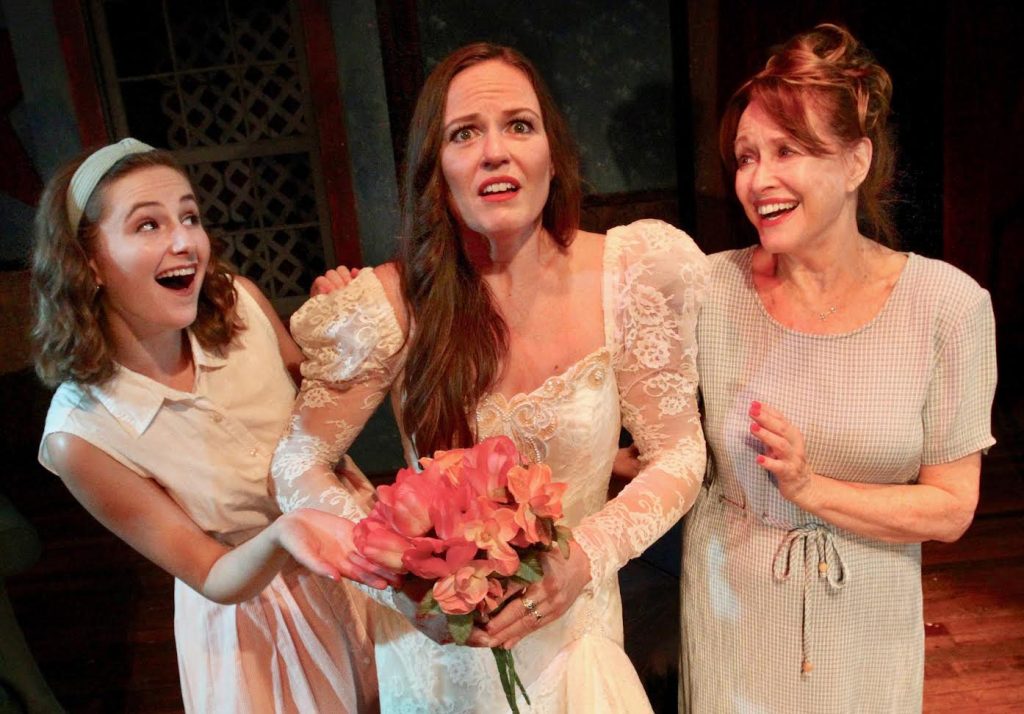 Pioneer Playhouse rolled out its second production of the summer season last Tuesday evening with the production of “Southern Fried Nuptials.” The opening performance welcomed a packed house of fans eager to see the romantic comedy drama.

Tuesday night’s showcase ran just over two hours long and had fans engaged from start to finish. “Southern Fried Nuptials” director Jennifer Goff’s brilliance was on full display throughout the entirety of the play.

The play took fans through a roller coaster of serious, funny and sad emotions through the extent of the production which highlighted Goff’s excellent directing skills. “Southern Fried Nuptials” is truly the perfect storm of emotions.

Two actors who contributed much to the light hearted side of this comedy were Pioneer Playhouse veterans Aidan Chapman and Jan Sheffield, who portrayed Dewey Frye, Jr. and Fairy June Cooper. Their goofy, yet thoughtful dialogue contributed a childlike perspective to the serious nature of the in-play conversations.

The two back-and-forth crazy talk had the near-sold out crowd belting out with laughter.

However, the performances put on by Erika Lee Sengstack, Bret Hopkins and Jimothy Beckholt stole the show. The actors who played Harlene Frye, Atticus Van Leer and Carter Canfield, respectively, had playhouse fans completely sold on the confusing, hilarious, and ever changing love triangle that serves as Southern Fried Nuptials main plot.

Despite having a revamped cast from “Dracula Bites”, the new members of this production fit in well and made it look like they had been working with the prior play’s actors all along.

Patrica Hammond, who plays Dorothy Frye, provided the play with lots of laughs and mastered her role as Harlene and Sammy Jo’s mother. Hammond hilariously embodied what it meant to be a stereotypical southern mother with her stern discipline, know-it-all attitude, and relentless protection of her daughters.

Although most of the production was comical, the shocking ending to the final act saw chaos and drama unfold at a rapid pace.

The ability for cast members to sell the chaos and have the audience buy into character developments within the production was what was most astonishing to me. At times during the showcase I found myself forgetting that the actors on stage weren’t actually friends and family.

They sold the true feeling of a family so well and made it seem like you were inside the chaos of a real life southern family.

The standard that the playhouse holds their actors to was evident with their masterful portrayal of “Southern Fried Nuptials,” despite only having a few weeks to rehearse and prepare.

Pioneer Playhouse’s dedication to their patrons was on full display Tuesday night as well. Staff members built, painted, and furnished a brand new set for this play and it looked phenomenal. The overall feel and look of the set really enhanced the actors’ capability to put on a great show.

The set, which was renovated just one day after the final production of “Dracula Bites,” made audience members truly feel like they were watching a drama in a true southern home.

All in all, opening night was once again successful for the playhouse. Pioneer Playhouse owners Heather and Robby Henson were showered with congratulations for a great production while fans left the venue.

The A+ acting and entertaining nature of “Southern Fried Nuptials” should make all those who call themselves fans of theater want to go see the family friendly act.