UK’s Gaines nominated for NCAA Woman of the Year 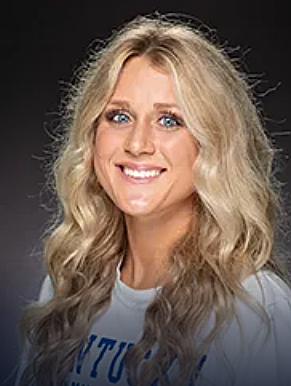 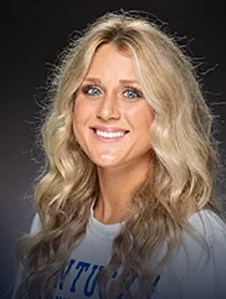 “This award recognizes not only athletic performance, but also academics, service and character, so to be thought of as someone who embodies all of those things is extremely humbling,” Gaines said. “I’m aware I was up against a department full of amazing female student-athletes, so I’m very grateful and always proud to be a Wildcat. I have so much love for UK and Big Blue Nation.”

“I am thrilled about this news,” said head coach Lars Jorgensen. “Riley is a super hard worker in everything that she does, always giving 100 percent in the classroom, in the community and in the pool. She was a highly competitive student-athlete during her four years at Kentucky, and she has left a lasting impact on our program.”

The Gallatin, Tennessee, native was tabbed the 2022 SEC Women’s Swimming and Diving Scholar-Athlete of the Year, becoming the fourth Wildcat to win the award in program history. It also marked the fourth time in the last eight years a member of the UK women’s swimming and diving team has won it.

Gaines also has a track record of community service, being named the 2022 SEC Brad Davis Community Service Leader of the Year for having been involved in programs such as God’s Pantry, Special Olympics of Kentucky, Give 10 (R.E.A.L. Read), the Shriner’s Hospital and Amachi during her time in Lexington. She also participated in the Kentucky United Telethon, which raised more than $3 million for the American Red Cross to help tornado victims.

The three-time individual conference champion’s accomplishments in the pool are just as impressive as they are out of the water. A two-time team captain, Gaines graduated as one of the most decorated swimmers in program history. She owns the school record in three individual events and four relay events, is a multi-time U.S. Olympic Trials qualifier and was instrumental in UK winning its first-ever SEC team title in 2021. She has also amassed 12 All-America honors throughout her four-year career in the blue and white.

She tied for fifth in the 200 free at the 2022 NCAA Championships, marking the highest individual finish of her career at the national meet, while also garnering honorable mention recognition in the 200 fly, 400 medley relay and 800 free relay. She found herself on the All-SEC First Team for the second season in a row after bringing home two gold, one silver and two bronze medals at this year’s conference meet. Gaines’ performances in all three of her individual races at the SEC Championships set new program standards, while her winning time of 1:51.51 in the 200 fly was a meet and conference record and moved her up to the 16th-fastest swim in U.S. history.

Kentucky has produced one NCAA Woman of the Year in the award’s 31-year history, with former swimmer Asia Seidt earning the title in 2020 from a record 600-plus candidates.