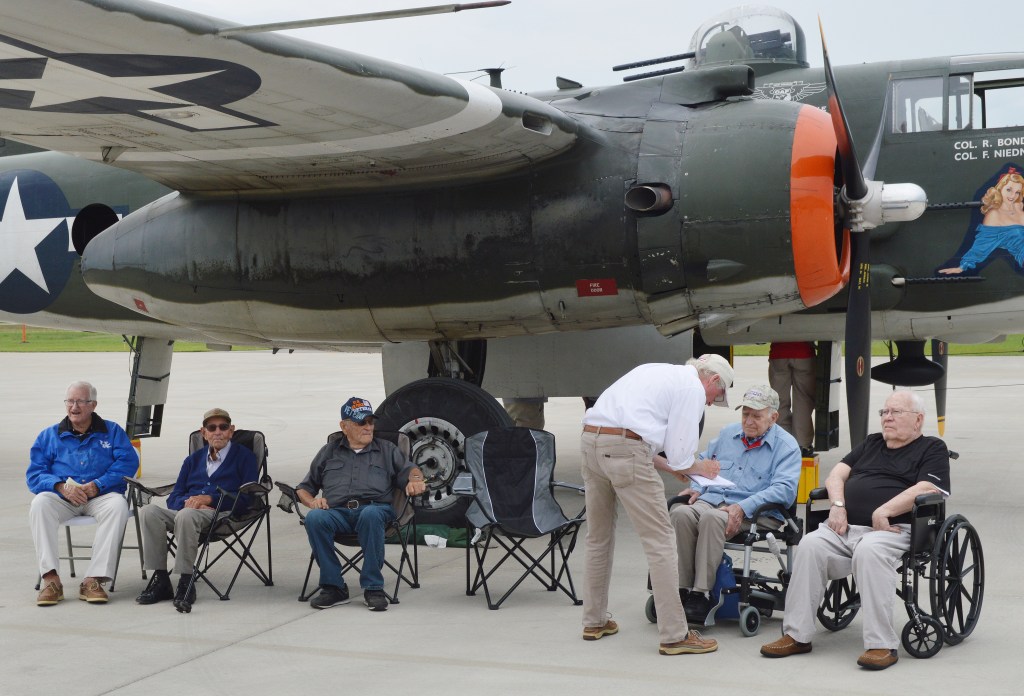 Five veterans of World War II prepare to get airborne aboard a B-25 bomber Sunday at Danville-Boyle County Airport. Photo by Jared Darwish

Five veterans of World War II prepare to get airborne aboard a B-25 bomber Sunday at Danville-Boyle County Airport. Photo by Jared Darwish

Roger McCombs spent his time in the Navy during World War II aboard a ship, but Sunday his service to his country was recognized with a trip aboard a B-25 bomber.

A resident of Danville, McCombs was one of five servicemen honored by the national Honor Flight organization Sunday at the Danville-Boyle County Airport.

The hour-long flight aboard the bomber “Show Me,” which was built in 1944 and is operated by the Commemorative Air Force wing in St. Louis. The airplane will also visit Paducah, Russellville, London and Bardstown as part of it’s tour of Kentucky. Also on the flight was Eugene Pflughaupt, a resident of Morning Pointe Danville and three others.

“It was an incredible day flying these World War II veterans, and such an honor to show them our gratitude for their service and sacrifice,” said Jeff Thoke, chairman of Honor Flight Bluegrass.

The 95-year-old McCombs served in the U.S. Navy for three years during World War II, where he rose to the rank of lieutenant junior grade. 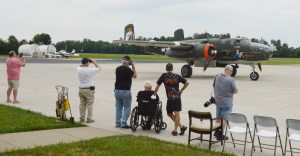 Family members and others look on as the B-25 “Show Me” returns after honoring a group of World War II veterans with an hourlong flight Sunday at the Danville-Boyle County Airport. Photo by Jared Darwish

Unlike some of his contemporaries on Sunday, McCombs never piloted planes during World War II but instead was at sea throughout the duration of his service. McCombs said that his three-year stint in the military was a very fascinating and adventurous time in his life.

After the war ended, McCombs went back to school and eventually graduated with a degree in engineering. He went on to build nuclear-powered aircraft carriers for the Navy.

One of the highlights of McCombs’ career was when he worked for NASA after the war.

The World War II veteran eventually settled down in Danville after many years of hopscotching the country.

“It is truly an honor to be given this opportunity and be alongside men that served this country,” McCombs said.

McCombs’ family came to the event on Sunday to show their gratitude for the sacrifice he and others like him endured. The day was an emotional one for McCombs who was humbled by the recognition shown by Honor Flight.

Family members of these veterans along with lots of Danville locals came out to celebrate the day dedicated to them. Before the flight, people were able to talk to the veterans and check out B-25 Bomber that was transporting the men on the honor flight.

Right around 10:30 a.m. the veterans were loaded into the aircraft by Honor Flight staff and taken on their one hour plane ride around the area. All the members who partook in the flight enjoyed adventure and it even brought back some fond old memories for a few.

After the flight guests were able to go inside the aircraft and see and feel what it was like to serve aboard a B-25 during wartime.