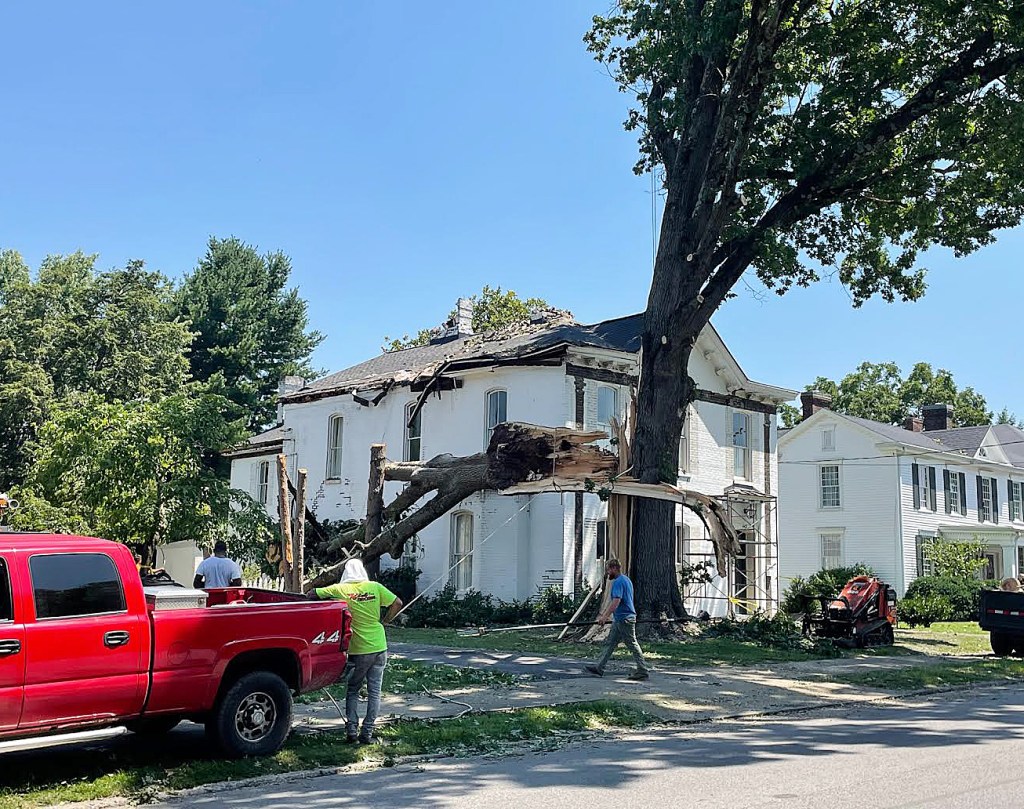 Workers from Central Kentucky Tree Service work to remove a massive chunk of a pin oak tree that collapsed onto a Danville home last week. Photo by John Reitman

When Katie Palmer was awakened by a loud noise in the waning hours of July 20, it sounded like the world was crashing in on her 19th century Danville home. Turns out it wasn’t the world, just a tree. A really old, really large tree. 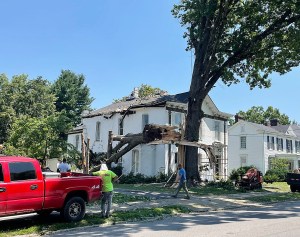 Workers from Central Kentucky Tree Service work to remove a massive chunk of a pin oak tree that collapsed onto a Danville home last week. Photo by John Reitman

“There was a sudden wind, and then the tree came down, then a loud crash,” Palmer said.

“I’ll never get that sound out of my head.”

The pin oak, estimated at 150 years old and 90 feet tall by workers with Central Kentucky Tree Service who were trying to remove it, came crashing onto the roof of Palmer’s 1853 Italianate-style house at 443 W. Lexington Road in Danville. Palmer and her 9-year-old daughter Peytie were asleep in the second floor corner bedroom where the tree fell.

Neither was hurt, and Palmer’s husband, Ryan, and their 12-year-old son, Pete, were in Columbia on a mission trip with Grace Presbyterian Church and the Central Kentucky Storm soccer club.

The couple have owned the home since December 2016 and have since been busy restoring it to match how it looked in the mid-19th century.

“We were just getting ready to paint the outside,” said Palmer, a teacher with the new Boyle County Arts Academy. “I’m glad we didn’t paint it.”

Parts of a wall and a ceiling fan in the bedroom came down, and the home has visible signs of structural damage on the roof.

“We’ll get there,” Palmer said. “It will just take a little longer than we thought.”

Palmer’s father-in-law is a retired homebuilder, who will oversee the work to ensure the home is repaired correctly and safely.

“We’ll get a company to come in and make sure it is structurally sound,” said Dennis Palmer. “There is a lot that needs to be done.”

The fallen tree also took out a lot of landscaping and three mature hemlock trees.

Although her family will split time living with her parents and her in-laws while the home is being repaired, Palmer knows it could have been much worse for her family.

“It’s all replaceable. I’m just thankful no one got hurt,” Katie Palmer said. “Everything else is just stuff. It’s just a house. It can be fixed.”