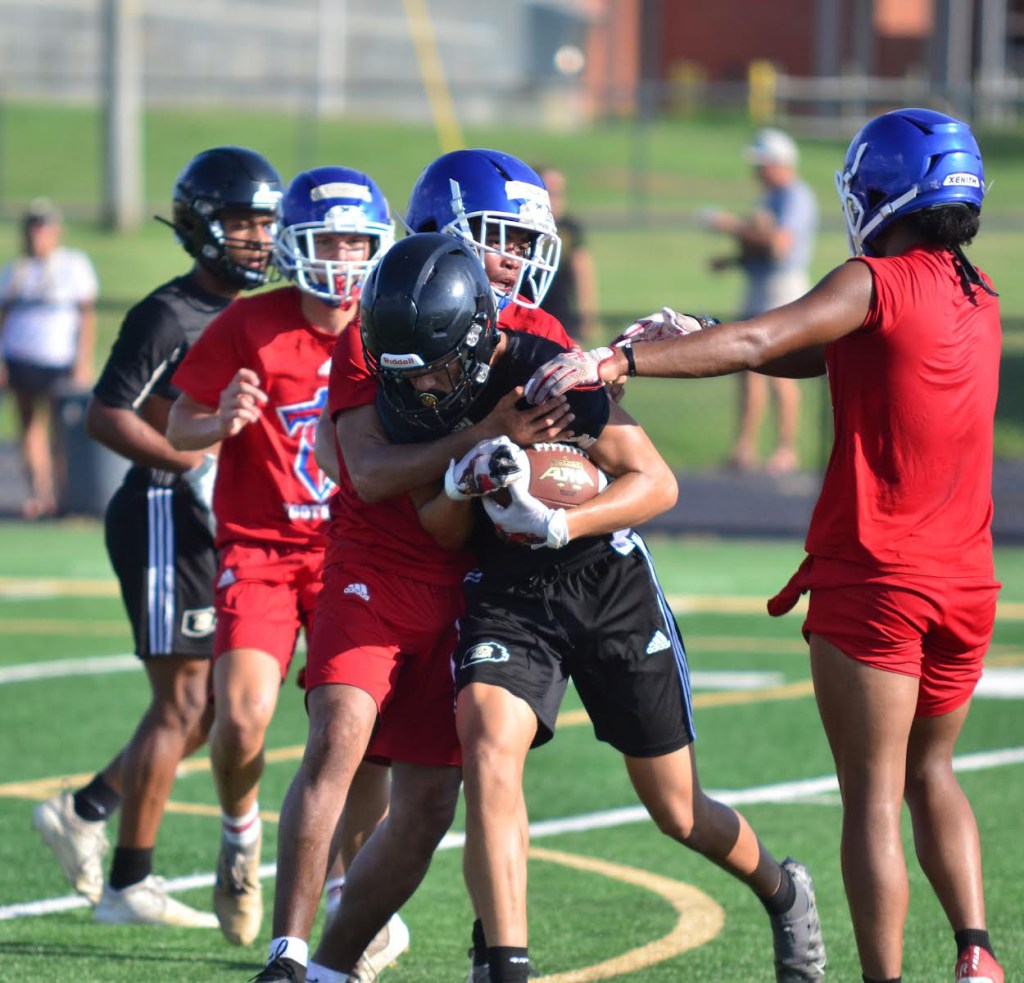 Keenan Stewart of Boyle County is wrapped up by Mercer County players during a 7-on-7 competition July 19 at Rebel Stadium. Photo by Mike Marsee

Never mind those trophies in the lobby. And the players who have championship rings should probably leave them at home.

In the heat of July, Boyle County’s bling doesn’t mean a thing. 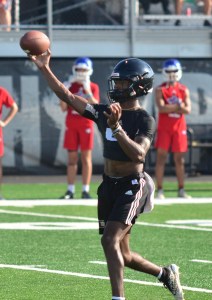 Boyle County quarterback Sage Dawson puts up a pass during a 7-on-7 competition July 19 at Rebel Stadium. Photo by Mike Marsee

Neither reputation nor expectations mean much to Boyle coach Justin Haddix, who said the Rebels began their preparations for the coming football season at the same place they start every season.

“Every time you’re starting out, it’s kind of starting at the bottom,” Haddix said. “(We’re) seeing where we’ve got to go, putting everything in, getting in there and getting to work, learning how to work. It’s a new team, let’s see what we’ve got.”

Come late fall, Boyle will measure its success on the scoreboard as it takes aim at a third consecutive Class 4A championship. In midsummer, however, the increment of measurement is considerably smaller.

Improvement comes slowly at this time of year, one day at a time, one practice at a time.

“You want to be consistent,” Haddix said. “Consistently doing the right things, consistently knowing what to do, those are all things that you’re looking at at this point.”

Boyle lost 12 seniors from a team that went 14-1, including its quarterback, its top three receivers and its placekicker. The Rebels return their leading rusher and their top six tacklers.

The Rebels are three weeks away from their season opener Aug. 20. And while Haddix said the players worked hard during the offseason and are working hard in practice, much work remains to be done between now and then.

“Our guys care about it. They worked hard all winter, they invest a lot and we saw some great things from them. But we’re nowhere near where we need to be,” he said.

Haddix said he and his staff approach preseason practice in phases when they begin to prepare for the season in earnest following the KHSAA-mandated dead period.

The first phase includes a series of 7-on-7 passing competitions against players from other schools. Boyle hosted two of those events last week, then concluded its 7-on-7 schedule Saturday in a tournament at Eastern Kentucky University.

“I enjoy the competition, and the players enjoy getting to see somebody else because you constantly go against each other, and you have some people in the stands,” Haddix said.

Haddix said he’s looking for good communication in the 7-on-7 events, and he’s also paying at least as much attention to the defense as to the offense.

“Everybody thinks it’s more for offense, but really it’s better for your defense to see what’s going on,” he said. “On offense, if you can throw the ball with seven or eight guys dropping back knowing it’s a pass, it should be easier when you start with pads on.”

He said execution is much more important than outcomes this time of year.

“I love it and you want to compete, but who cares about who wins the 7-on-7 championship?” Haddix said.

With 7-on-7 play behind them, the Rebels are in the middle of a two-week stretch of regular practices. The next phase of the preseason begins Aug. 5 with their annual camp trip to Jabez, and that will be followed by about 10 days of preparation before the opener against Madison (Ind.) in Mercer County’s Little Caesars Fort Harrod Bowl.