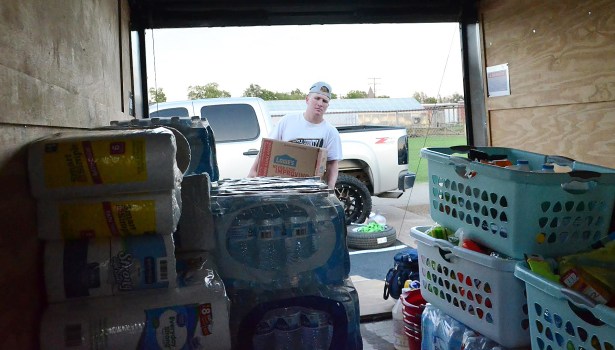 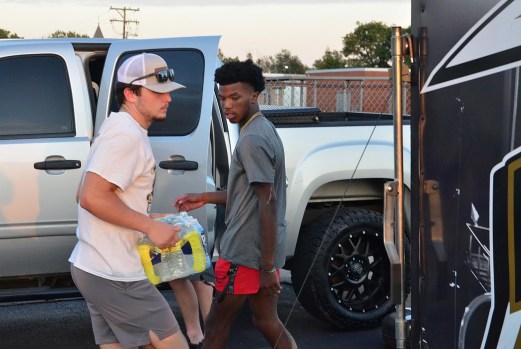 Teamwork has helped Stone and his Boyle County teammates succeed on the football field, and Stone knew he could count on his teammates to work together to help some of those affected by last week’s deadly flooding in eastern Kentucky.

So he went to Boyle coach Justin Haddix, who hails from one of the 13 counties affected by the July 28 floods, with the idea that the Rebels should do something to help Haddix’s alma mater.

“We’re all about our team and we’re all about coming together, so I thought it would be a great idea for us to come together to help them as well,” Stone said.

Haddix and others delivered the donations made locally to Jackson on Wednesday, and coaches from all corners of the state joined in the effort to help Breathitt salvage a season that begins in two weeks.

Haddix said he was touched that Stone and his teammates wanted to do something for the coach’s hometown and its football program.

“They don’t know anybody from there except me and my family,” Haddix said. “These guys have so many other things going on, and you look at the world and it’s all about ‘me, me, me,’ and then you see someone have compassion. That makes it special as a coach, having kids who are that way, and that’s why this place is what it is.”

Stone, a senior running back-linebacker, was moved by the stories and images he had seen from eastern Kentucky, where the floods killed at least 37 people in five counties and damaged or destroyed countless homes and buildings.

“That really hit me, just to see the elderly and young children and everybody else in that part of Kentucky struggle, that just really hit me down deep,” he said.

He knew football players were hurting, too, including those at the school where Haddix once played. And with a new season just around the corner, he saw a way where he and his teammates could help.

“You’ve got rivals … but at the end of the day we’re all from Kentucky, we all play ball and we all know what it takes to play football, and we all love it,” Stone said. “For them not to have what everybody else has is very difficult … so I figured it’d be a good way for us to give back to the community.”

As the idea began to grow, Haddix posted an impassioned plea on social media asking for donations to help his hometown. He hoped to fill a trailer with supplies, but instead at least three trailers were filled over two evenings in the Boyle parking lot.

The Boyle baseball team, which was looking for a way to contribute to the flood relief effort, partnered with the football team for the donation drive, and Haddix said several other Boyle athletic teams participated as well.

Some of the items that could be used by the Breathitt football team were delivered to the school, along with cash donations that Haddix said totaled between $6,000 and $7,000, and other items were taken to a couple of Breathitt County churches that are being used as distribution centers.

Haddix said some members of his family and of his wife Melissa’s family lost their homes to the floods, and he knows many other families in Breathitt County that have been affected.

The Breathitt football program lost much of its equipment when the North Fork of the Kentucky River escaped its banks and swamped the Bobcats’ field and fieldhouse. Some of the team’s players and coaches also lost their homes to the flood.

“Some of them lost everything,” Haddix said. “Seeing that facility, that’s the place that molded me into who I am … it’s disheartening when you see that. It’s a really proud football program, and that brings pride to that town just like football here does, just like football at Danville does. It’s part of the town, and you want to see it back on top.”

Other programs have been helping Breathitt in all sorts of ways. Lexington Christian coaches and players traveled to Jackson last weekend to clean any equipment that could be salvaged, and donations of money and equipment have come from many sources.

Haddix said Garrard County and Lexington Catholic were among the teams that partnered with his fundraising effort. Former Boyle coach Chris Pardue, the offensive coordinator at Campbellsville University, brought some surplus equipment from that school.

“A lot of people I don’t even know in the social media world are sending money,” he said.

Boyle donated some footballs and shoulder pads, and Haddix said he is teaming with some of his former teammates to buy travel bags for the players to carry their equipment this season.

Athletic programs at other local schools also are contributing to the flood relief effort. For example, the Mercer County boys basketball team organized a drive to collect supplies that were taken to Letcher County, and the Mercer girls basketball team took donations and supplies at a middle school game.

Stone said he wished he could have traveled to Jackson with Haddix, but he’s happy he was able to help from afar.

“I wish I could go down there and help,” he said, “but just the thought of giving back will satisfy me.”