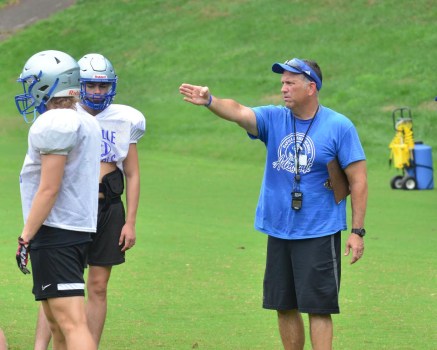 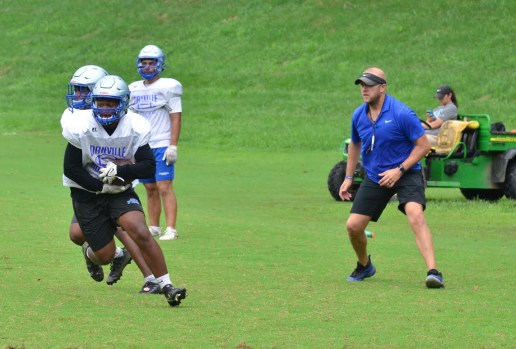 Danville is only a couple of weeks away from its second football season under Mark Peach, and things are looking up for both the Admirals and their coach.

Peach said his team has been building on the success they had in his first season in Danville, a process that he said began in the earliest days of the offseason and continues now that preseason practice is well underway.

“I’ve really been pleased with the guys,” Peach said. “I feel like they’re ready to try and take the next step.”

Danville took some steps forward in the 2021 season following an offseason of turmoil and transition. The Admirals went 8-5, posting their highest win total since 2017, the school’s most recent championship season.

And Peach said the Admirals are well ahead of where they were a year ago at this time.

“We had a great offseason in the weight room, we had a great spring, great June work, and so far in the preseason I’ve just been really pleased with the work and the attitude,” he said.

Peach is also ahead of where he was this time last year, when he was commuting to Danville from Campbellsville, where he lived in his in-laws’ basement for a few months.

He said the Admirals’ progress in the weight room was evident.

“Really, it all starts in the offseason in the weight room, and I thought we made some nice strides as a team,” Peach said.

That was followed by a productive spring practice season.

“People talk about the fall, but that spring is so important to work with the guys, and I feel like we were able to pick up where we left off last fall,” he said.

There were more 7-on-7 sessions last month than the team had a year ago, as Peach said he wanted to give Danville more opportunities for competition.

That will happen during the scrimmage season as well. The Admirals are back up to two scrimmages this year, and both are against good opponents, West Jessamine on Friday night and Bardstown next week.

“Particularly for a smaller school, an extra scrimmage is just so valuable,” Peach said.

Danville will be led by a senior class of about 10 players.

“They’ve just really tried to set an example for our younger guys in terms of work ethic,” Peach said.

Peach noted that the seniors and a number of players in the classes below them saw plenty of action last season.

“A lot of these guys, they were kind of the nuts and bolts of what we were doing last year, a lot of great interchangeable parts, guys who can play multiple positions,” he said. “Success only encourages more success, and a lot of our guys last year got so much valuable experience.”