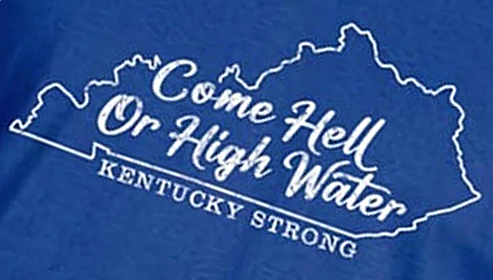 Those affected by the recent floods in eastern Kentucky have already seen a tremendous outpouring of support not only from those within their state, but nationally, as well. Across the country organizations have set up campaigns to provide immediate relief to the victims of this tragic event.

One notable campaign created recently has been the Come Hell or High Water fundraiser run by Nashville country singer T. Graham Brown. When the disaster hit, Brown and his team decided to make Kentucky Strong t-shirts that play off his hit song “Hell and High Water.”Brown, whose manager came up with the t-shirt idea, is now selling them on his website (tgrahambrown.com) for $25, with proceeds going to flood victims in Kentucky.

For Brown, a native of south Georgia, seeing what happened to eastern Kentucky really hit home for him as someone who was involved in the infamous Nashville floods 12 years ago.

“The reason why this is personal for me is because I am friends with people who live in Kentucky, such as my manager and country singers,” Brown said. “So I want to do my part in helping their state out like they did for mine when the floods hit Nashville.”

The campaign started by Brown only a week ago has picked up traction quickly and has seen other country artists such as Billy Ray Cryus, Loretta Lynn and Ricky Skaggs join along with Brown in the fight.

On Thursday the first of what Brown hopes is many bus loads made the trip to Eastern Kentucky to provide the first line of relief. When the floods hit, the country artist and his team began collecting food, water, first aid, and many other life saving items essential to these people in their time of need.

“I can’t thank these awesome people enough, that came out to the Walmart in Franklin, Tennessee and gave us whatever they could,’’ Brown said. “This truly is a special thing to be a part of.”

Although there is no set goal in mind yet, Brown said he would like to raise as much money as possible so that they can greatly help these people who have lost everything.

Brown spoke on what it means to him to be able to use his influence for good in the world.

“ I serve an awesome God who has given me the greatest job in the world that allows me to help people and make them happy,” he said, “which is what I am all about.”