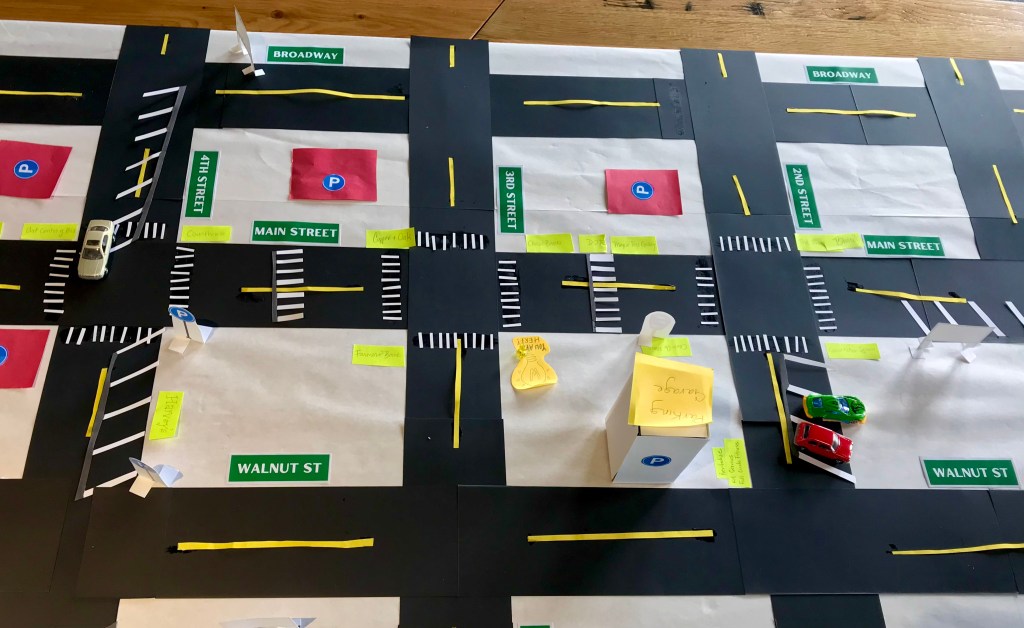 The CentreWorks Urban Innovation team finished putting together a prototype solution for downtown parking in Danville.

The innovation team was hired by the City of Danville to come up with community-supported changes for downtown parking. The team is made up of Centre College interns Isaiah Arroyo, Kali Hernandez Fraire, and John Bingaman.

They used the Human Centered Approach to Innovation, which generates solutions to problems that the community supports. The five steps of the process are: empathize through community interviews, define the problem, ideate solutions, develop a prototype, and test it to gather feedback.

“This is not our solution, it’s the community’s design and solution; we just used the process,” Bingaman said. “It’s really been us listening to the community.”

Starting in June, the innovators conducted empathy interviews with community members who wanted to share their thoughts on downtown parking. They distributed flyers at businesses, posted about the interviews online, having the option to do interviews in Spanish; and they ended up talking to over 200 people in the area.

The main problems they heard from conversations with community members are: “businesses and restaurants are losing customers because they can’t find parking,” “some people can’t or won’t parallel park,” “downtown employees are using customer parking,” “there is confusion because city can’t enforce 2 hour parking but the signs are still up,” “the parking garage doesn’t feel safe,” “people don’t always use their designated parking spaces,” “it’s quicker to jaywalk than to wait for the light on Main St.” and “walking lengths to the car at night is scary,” among other things.

From these problems, the innovators came up with the question, “How might we develop an understandable and inclusive downtown parking strategy that is safe, convenient, and efficient?”

In response to the problem that the parking garage is underutilized, they came up with the solution to install visible and understandable signage both outside the garage and in public spaces; implement cameras, lights, and frequently clean the elevator and stairs; and offer free parking for the first three hours of personal use.

In response to problems with crosswalks, the city could install mid-block crosswalks down Main Street and/or side streets like Third, Fourth, or Fifth streets.

Other possible solutions to problems presented are:

• Whereas people don’t know where they can and can’t park, the city can install clear, highly visible signs that show when and where parking is available to the public. They could also have several places downtown that display a map of businesses and parking spaces.

• Whereas the city cannot enforce parking for the current free two hour limit, the city could install parking meters that are efficient and take up less space. They could take out the current meters and put one meter in the middle or end of each block, and have customers pay through an app.

• Whereas paying for parking is an obstacle for people, the city could offer more flexible time options for daily, hourly or split. They could also coordinate private/business parking lot owners to allow free parking during closed hours with clear signage

• Whereas handicap parking is not efficient or safe, the city could provide a handicap loading zone with sidewalk dropdown.

• Whereas the city does not regularly update citizens about parking, they can make both a mobile app and website with information about parking availability and navigational changes in town.

Whether some of these changes might be added to the current streetscape project is yet to be decided.

The city’s current downtown streetscape project will result in less on-street parking spaces downtown. The innovators said community members were not involved in the current project, and they generally want more communication from the city.

“I think some of their frustrations are the fact that they really weren’t involved in the [streetscape design] process,” Arroyo said. 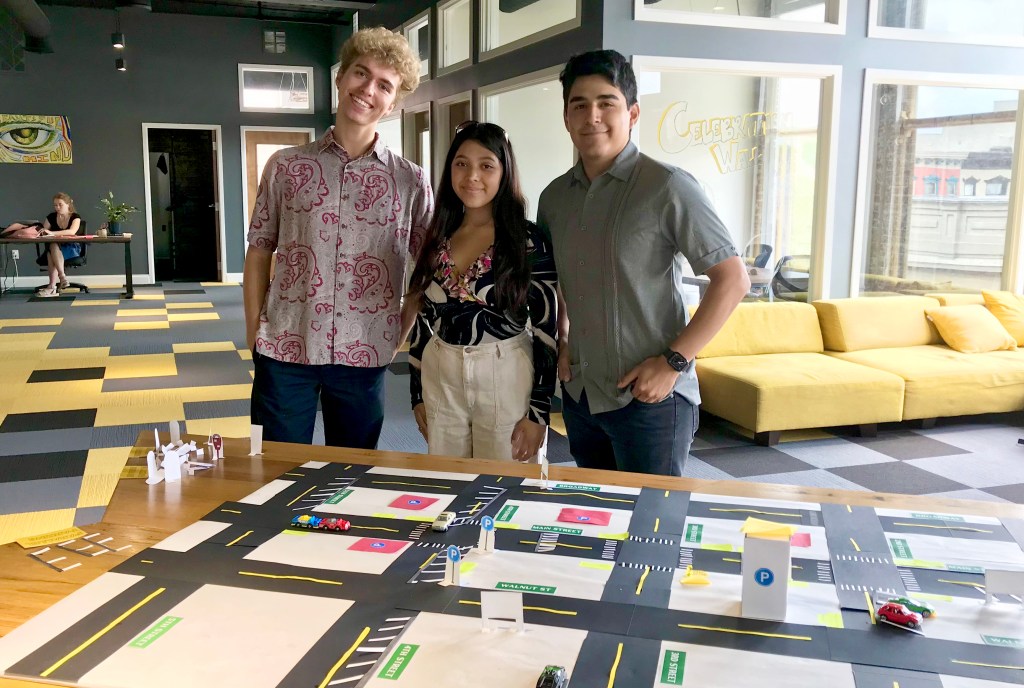 The team worked with City Engineer Josh Morgan to determine the best spots to possibly add diagonal parking. With additional studies by the city, some of the best places might be along North and South Fourth Street, between Broadway and Main, Walnut and Main, and Walnut and Figg Alley. Other spots for diagonal parking could be on Main between Second and Wilderness Road near Constitution Square, or on Fifth Street.

They determined the best spots for mid-block crosswalks would be on Main between Second and Third, and Third and Fourth.

Bingaman said they got very positive feedback about the mid-block crosswalk, signage solutions, and the idea for an app and website.

“Something we heard from a ton of community members was feedback about the mid-block crosswalk and how that would be useful, specifically in the blocks between Third and Fourth by the Episcopal church; a lot of people cross there,” Bingaman said. “We’ve even heard from some delivery drivers who have to park in that middle lane, and they also said a mid-block crosswalk there would be really helpful.”

Arroyo said the mid-block crosswalk might be similar to the one near Centre College on Main Street, where it generates a red light for cars to stop.

One idea that people wanted that did not make it into the final prototype is better and more bike lanes. Community members said the bike lanes on Main Street are not safe, and they generally want more bike lanes in town.

The innovators are confident that the city of Danville will implement some or all of these ideas in the coming years. The team said they loved speaking to and working with citizens.

“I really love that I got to experience this because now I feel like I’m more in touch with the community; I went to shops that I never would’ve gone to, thanks to this,” Fraire said.