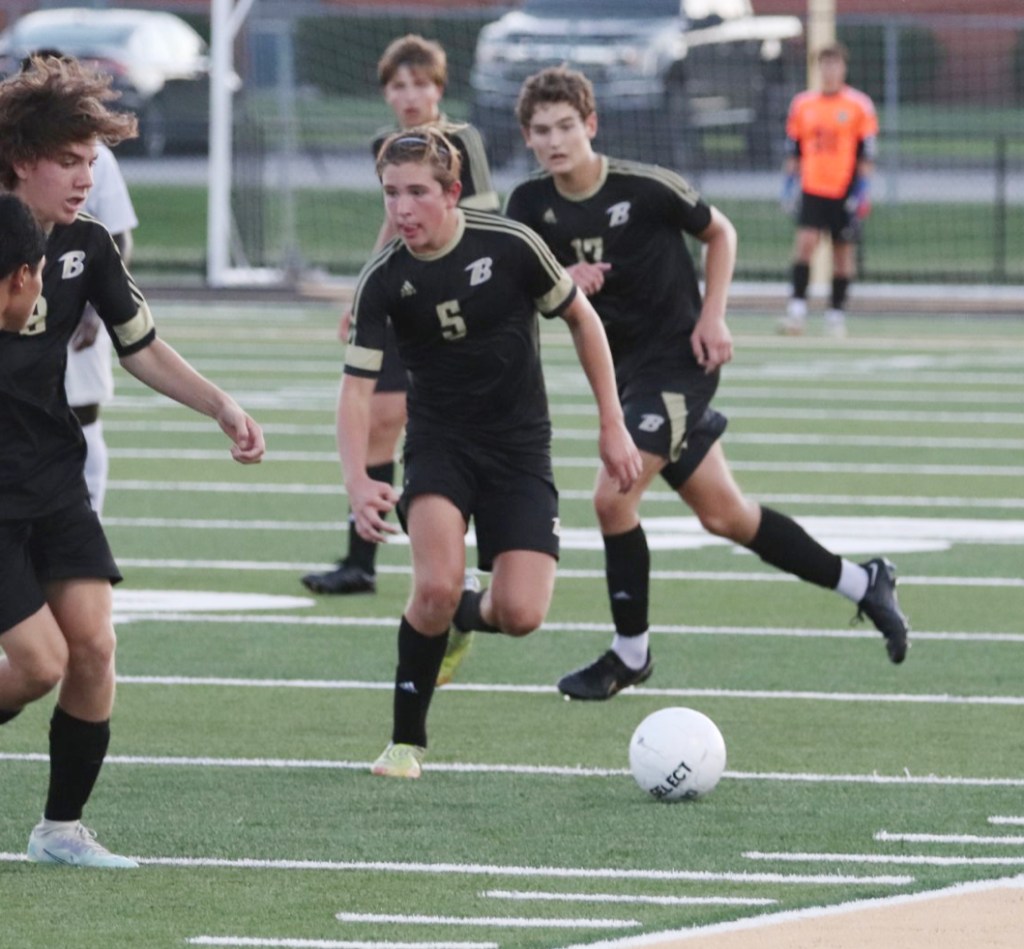 Sophomore Bo Little (5) scored the first goal of the season for the Rebels to give them an early lead. Photo by Paul Cooley

The Boyle County boys soccer team started strong and finished strong in their opening match against Bryan Station at home on Monday night, but everything in between left room for improvement.

It took just over 13 minutes for Rebel sophomore Bo Little to break the deadlock with a rebound goal from point-blank range. Bryan Station responded minutes later with a beautiful penalty kick into the top right corner of the net.

The Defenders scored just five minutes after the end of the break to take a 2-1 lead when a Station striker slipped in behind the Rebel backline and slotted his shot into the bottom left corner.

Boyle searched for an equalizer and found it with just seven minutes remaining in the most fortunate of manners. Senior Jack Little was taken down in the box and fellow senior Tristan Compton stepped up and leathered his penalty kick into the bottom left corner to level the score.

Junior Matthew Britt was oh-so-close to giving the Rebels a last-second victory. His header in the center of the box with only 40 seconds remaining in the match was denied by the Station goalkeeper to secure the tie.

“We had strong first fifteen minutes and last fifteen minutes, but it got a little shaky at times in the middle,” said Boyle head coach David Ritchie after his first game in charge of the Rebels.

As Ritchie alluded, the Rebels dominated possession and the chances on goal in the early minutes. They found pockets of space between the defense and midfield, and created opportunities for their forwards until after the first goal.

After the goal, the Rebels saw less of the ball and allowed the momentum to shift toward the Defenders’ sideline.

“I felt like we took our foot off the pedal a little bit,” explained Ritchie. “We had them on their heels, but when we let up, we allowed them to pick up steam.”

When the Rebels relaxed, Bryan Station was able to utilize their greatest weapon – speed – to take a 2-1 lead.

It took the Rebels until the 65-minute mark to turn the tide, and they tied it at 2-2 on a Tristan Compton penalty kick.

“I was very proud of how the team responded,” said Ritchie. “That is something you expect to see from a team later in the year. That grit and fight shows that this team can battle against any team we come up against this year. It was great to see that this early.”

The Rebels hit the road next to take on 12th Region foe Wayne County on Thursday at 6 p.m.