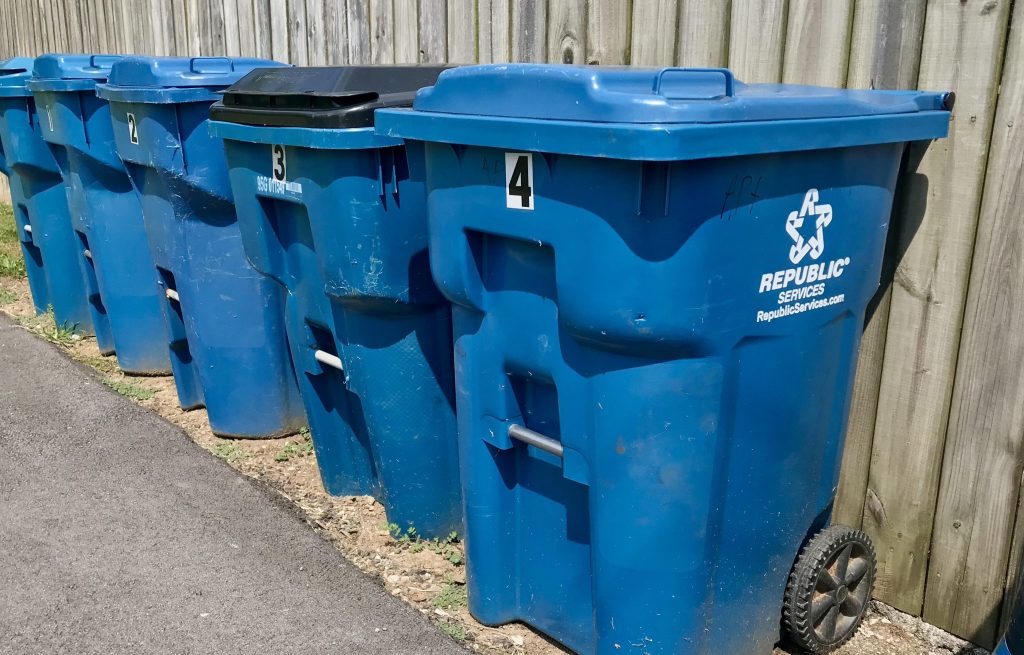 Republic Services recently implemented a change in trash pickup services where Danville households are charged additionally for having more than one trash or recycling can. However, this change was not communicated by mail to citizens, leaving many surprised to find an additional charge on their bills.

In the previous contract, households were allowed to have up to four trash or recycling cans for one $14 fee. In the new contract, citizens are provided two 96-gallon carts from Republic Services; one for solid waste and one for recycling. Any additional can is a $4 fee.

However, this change was not implemented right away in 2021. Danville City Engineer Josh Morgan said that Republic Services first needed to take inventory of who all had extra cans. Republic conducted a cart audit, and picked up extra carts from citizens, except from those who had requested to keep extra ones.

Once the audit was done, the city was able to sync up their billing software. Whoever had additional carts started being charged for them in April of this year.

In a letter to the Advocate-Messenger, Danville citizen Tammy Barkman said she was unaware of the additional charge before it started. She found an additional $8 charge on her water bill, and had to call the city to find out what it was for. She found out it was from having two extra trash cans.

Barkman said when she called Republic and the city of Danville, she received conflicting information about how citizens were notified. She said there was no notice of the change on her water bill, and no separate mail about the change.

Morgan said just before the billing change occurred, the city posted about it on their website and Facebook page, but did not send out mail about the additional charge.

He said the post explained that if people didn’t want to be charged extra, they would need to call and have extra carts turned in.

“Quite a few people did call, but then once we sent the bills out we had another round of people calling wanting to turn their carts in,” Morgan said.

Morgan said the city has been giving credits to whoever calls about not knowing about the additional cart charge.

“We were trying to get it off people’s bills if they didn’t want to pay that, because a lot of people didn’t know the charge was coming,” Morgan said. “You can put things on Facebook and the website, but most people still aren’t going to see it.”

When asked why the city did not send mail about the change, Morgan said, “It’s not something we do a lot of.”

“One of the things that’s been tough for us lately is trying to get the word out to the community about different things going on,” Morgan said.

He said the city’s new utility bill format of an 8×11 inch paper instead of a postcard will allow them to put more information like this on the water bill.

Why the additional charge happened

When the city bid for a new trash contract in 2021, they had two bidders, Republic Services and Rumpke. Morgan said both bidders wanted to include additional charges for additional carts. He said the city believes it’s a fair policy.

“We thought that was a way to make it fair to those that do not produce a lot of garbage,” Morgan said.

“When we have a contract that says the homeowner can put out anywhere from one to four cans, they have no idea how much garbage they’re actually going to get, and they don’t know the actual cost of garbage,” Coffey said. “So they pick an average cost, and they inflate numbers to be conservative with costs.”

Republic pays a certain amount by the ton to dump garbage at a landfill. Because households had more cans, Republic needed to plan to have more garbage, which determined the cost for all customers. Coffey said the new policy will likely drive down regular monthly costs.

Essentially, people now pay for what they use as opposed to some people dumping more garbage but paying the same amount.

Danville citizens have had other complaints with Republic about pickup drivers being rough with the cans. Morgan said they have heard complaints about drivers breaking the containers, setting them down far away from where they picked them up, sometimes fallen over or in the street, and leaving loose garbage after pickups.

The city has been alerting Republic about these issues, and people are actively working to get them resolved.

“They know they just need to work with their drivers to make sure those things aren’t happening,” Morgan said.

Citizens have also had frustrations about the customer service situation. Morgan said currently, the city handles most customer service, and communicates things on Republic’s behalf.

“Republic really relies on us to communicate things, even with the bulk pickup week, changes in their schedule; they’ve sent things to us and we post it on the website and Facebook,” Morgan said.

Customers can usually call the Public Works department, and that department works with Republic to get issues resolved. Morgan and Coffey said this system is inefficient, and they are trying to get Republic more directly involved in customer service.

“Our frustration right now is that sometimes their customer service people will tell them to call the city; it just depends on the request, but the goal is that all calls will go straight to Republic,” Morgan said.

Due to how Republic’s system is set up, they needed more customer account data from the city to be able to handle all customer service, and the city is in the process of getting that information to them.

A media representative for Republic Services said in an email, “Beginning September 1, customers will be able to submit all customer service inquiries directly to Republic, and from there, will receive direct notifications regarding service.”

Morgan said people would have to opt in to being contacted by Republic about changes in service, cost, and schedule, since customers are contracted through the city and not directly with Republic.

He concluded by saying they hope to get Republic to more commission meetings, talking to the public, and generally getting them more involved in the community.