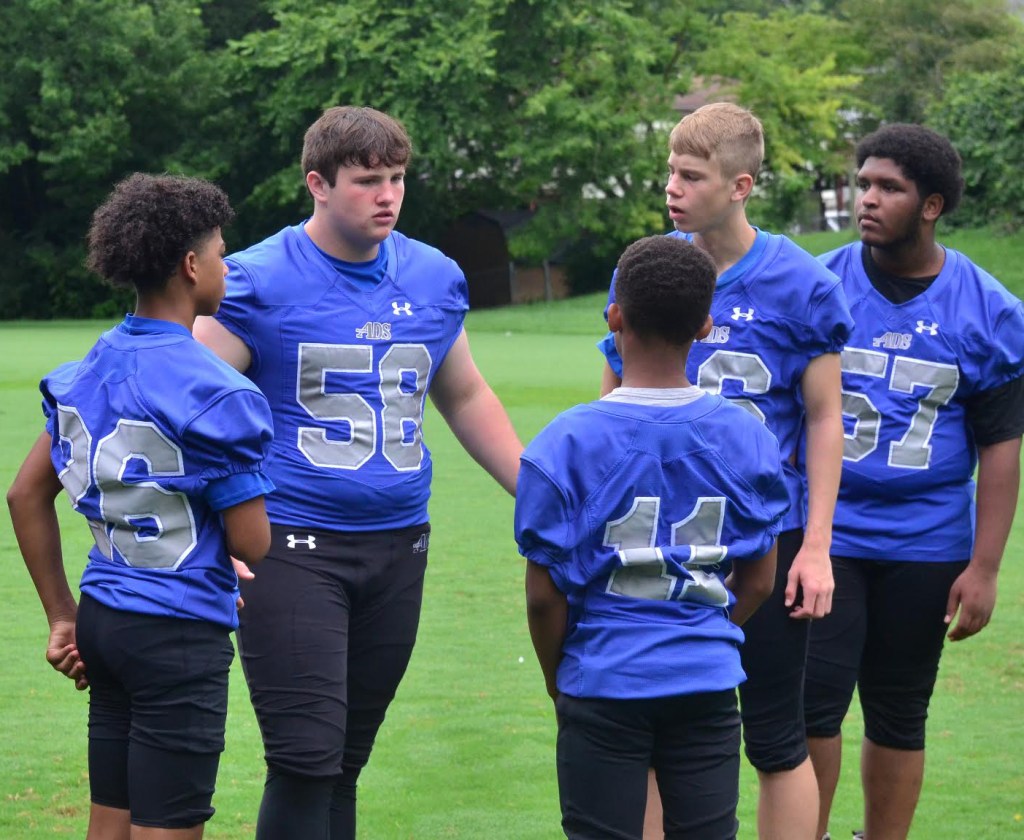 Danville sophomore Paul McClure and other players wait their turn for portraits during the team’s photo day. Photo by Mike Marsee

Danville is not where Mark Peach wants it to be yet, but he believes the Admirals are on the right track.

Peach would love to see Danville make a rapid ascent to again become one of the very best teams in Class 2A. The Danville coach knows, however, that progress almost never comes that quickly.

“We as coaches would like it all to happen immediately, but most of the time in life you’ve got to work and build,” Peach said.

So he and the Admirals are trying to sustain the gains they made a year ago, when Danville went 8-5 in its first season under Peach.

“Success leads to success, and with this group, I feel like they’re ready to take the next step,” Peach said. “Hopefully we can put some things together this year and we can put ourselves in position to have a postseason run that Danville’s familiar with.”

Danville returns a significant amount of experience from the 2021 team that gave the school its highest win total in four years and its first postseason win in three years.

That isn’t limited to the senior class, either. There are sophomores and juniors who played key roles last season as well.

“Last year they all got some valuable experience against some top-flight competition,” Peach said.

Perhaps no Admiral made greater strides last year than Demauriah Brown, who led the team in scoring as a freshman with 90 points. An all-purpose back on offense and a safety on defense, Brown is the top returning rusher (513 yards, 11 touchdowns) and receiver (180 yards, 2 TDs) and second in tackles (31, with three sacks and two defensive TDs) among returning players.

“He had such a tremendous year last year. He just has a knack to find ways to score,” Peach said.

Peach said he has also been impressed with freshman quarterback Jakeem Ray.

Another sophomore who could make a splash is Braidin Baughman, who saw his playing time at running back and safety increase late season when others were injured and made the most of it, finishing with two touchdowns and four interceptions.

“He’s another kid that works extremely hard. He’s very coachable, and like a lot of our guys, you can put him anywhere,” Peach said.

Junior Enrique Gutierrez-Jacobs will be the new quarterback after backing up Brady Morse last season. Peach said Gutierrez-Jacobs can throw either from the pocket or on the run, and he gives the Admirals another running threat as well.

There is experience on the offensive line, where senior center Chris Grier, senior left tackle Sam Shearer and sophomore right tackle Paul McClure return as starters. Seniors Aicen Ganns and Jaxsin Clontz settle in at left and right guard after starting on a part-time basis last year, and freshman Cliffton Yocum will also play at guard.

Many of those linemen will also be used on defense, as will most of Danville’s starters. That places a premium on conditioning, and Peach said that’s something the Admirals have been working on and will continue to work on through the season.

“That’s always a work in progress,” he said. “We’re certainly doing everything we can to try to get our guys conditioned and prepared, but there’s a certain component of actually playing a four-quarter, full-contact football game that’s just different. … That’s something we’re always aware of and something we’re always working on.”

Peach said Danville’s linebacking corps might well be the strength of its defense, and the strongest part of that unit might well be senior Xzavion Brown, who had a team-high 58 tackles last season.

Sophomore Kaleb Wilcher will replace older brother Keegyn, who has graduated, as the Admirals’ placekicker.

Peach said the team’s senior class has provided strong leadership in each segment of the offseason, from weight training to spring practice to June workouts to 7-on-7 events in July to preseason practices.

“All of these are opportunities to improve yourself as a football player, and this year’s seniors have been leading the way in every one of those segments of time,” he said.