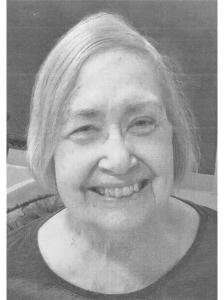 Anne was born in Junction City, KY on January 19, 1940, to the late Edward and Mary Page Singler. Anne graduated from Ursuline College and entered the Ursuline Convent, where she served for twelve years. After leaving the convent, she then became the assistant to Oscar Brohm at WHAS. Later, Anne served as the Executive Assistant to Edie Bingham and the late Barry Bingham, Jr. Anne loved her volunteer work with the Crusade for Children, the Girl Scouts and at Hawthorne Elementary School.

Besides her parents, she was preceded in death by her siblings, James Edward and Robert Henry Singler, Margaret and Mary Louise Singler and Dorothy Singler Robinson.

Visitation will be from 3-7:30 p.m. Friday, the 19th of August at Ratterman and Sons, 3800 Bardstown Road. Anne’s funeral service will be held Saturday at 10:30 a.m. in the funeral home chapel, followed by burial at 1 p.m. in the family plot at Junction City Cemetery. Expressions of sympathy may be directed to the WHAS Crusade for Children and online condolences may be shared at www.ratterman.com.