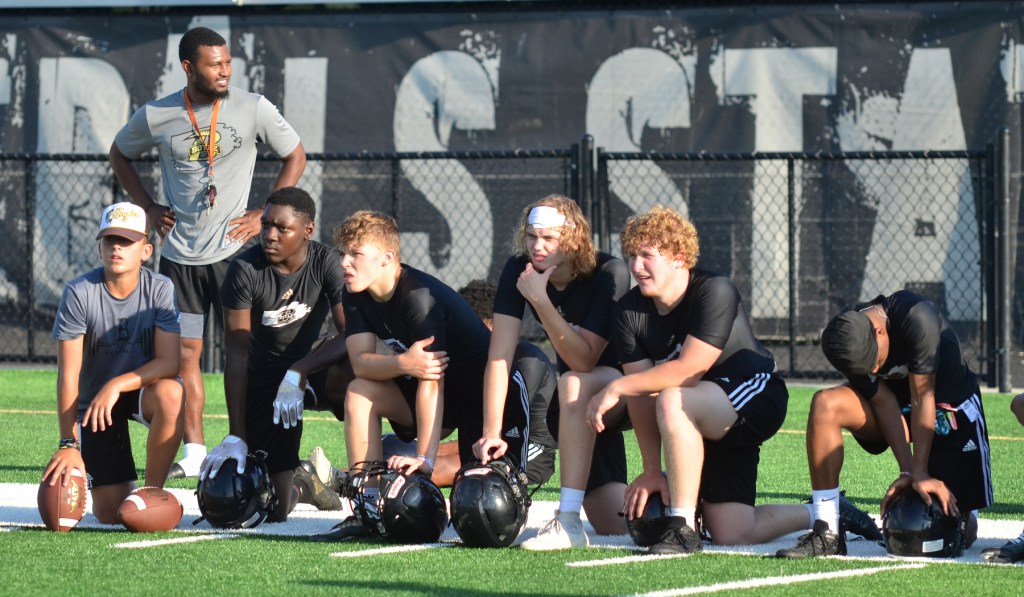 Boyle County players recover during a break in the action. Photo by Mike Marsee

Boyle County might not play as well Saturday as it hopes to in November and December, but Justin Haddix certainly wants the Rebels to play better than they did last August.

The Rebels were sluggish in their season opener a year ago, and they didn’t shake that malaise until the third week of the season. So naturally, their coach would like to see them approach the start of a new season with a better mindset.

That may be one reason why Haddix isn’t as concerned with what Madison (Ind.) might throw at them Saturday in the Little Caesars Fort Harrod Bowl at Mercer County as he is with how Boyle executes its own game plan.

“We’re just going to go over there and play our best and worry about us,” Haddix said.

Boyle won last year in the Mercer bowl, beating Tates Creek 31-6 for its fifth consecutive season-opening win to start a season that ended with a 14-1 record and a second consecutive Class 4A championship.

But before the dust settled after that first game, Haddix made sure his players knew their performance would be graded unsatisfactory.

The Rebels face an opponent of similar stature Saturday — Madison, like Tates Creek, won three games last season — and one they will know little about.

It’s much easier to get information on opponents than it once was, but scouting an out-of-state opponent for its first game of the season can still be difficult.

“You don’t know, and you’re just kind of going into it blind, and we’ve just got to do what we do,” Haddix said. “Obviously, we’ll look at what they did last year, but every team changes just like we’re going to change.”

Madison, a Class 3A school in Indiana’s six-class system, is coming off a second consecutive 3-7 season that ended with four straight losses by a combined score of 180-25. The Cubs haven’t won more than three games in any season during a streak of seven straight losing campaigns.

The Cubs’ returnees include quarterback Kaden Oliver, who threw for 1,410 yards and 12 touchdowns, and wide receiver Colin Yancey, who has 1,957 yards and 17 touchdowns over the past two seasons.

Haddix said Boyle benefitted from being able to play a preseason scrimmage for the first time in three years. Scrimmages were canceled in 2020 in the first year of the COVID-19 pandemic and the Rebels’ scheduled exhibition last season was canceled due to bad weather, but they got a tuneup last week at North Laurel before a large crowd.

“I felt like that didn’t jive real well for our first game against Tates Creek. Hopefully we’ll be a little better in this first game,” Haddix said.

Saturday’s game will mark the debut of Sage Dawson as Boyle’s starting quarterback. The junior threw 16 passes last season in a backup role.

The Rebels will begin the season with some key players sidelined by injuries, however. Most notably, offensive tackle Andrew Hardwick will be out for a few weeks with a foot injury, tight end-wide receiver Jakei Tarter will miss some time with a collarbone injury and wide receiver-defensive back Dakota Patterson, a Corbin transfer, is out indefinitely with a knee injury.

As part of a reciprocal agreement between Boyle and Mercer, the Rebels have opened their season in the Fort Harrod Bowl in six of the past seven seasons and are 5-1 in those games.

This will be Boyle’s first game against an out-of-state opponent since 2011, when it defeated Indianapolis Arsenal Tech 38-10.