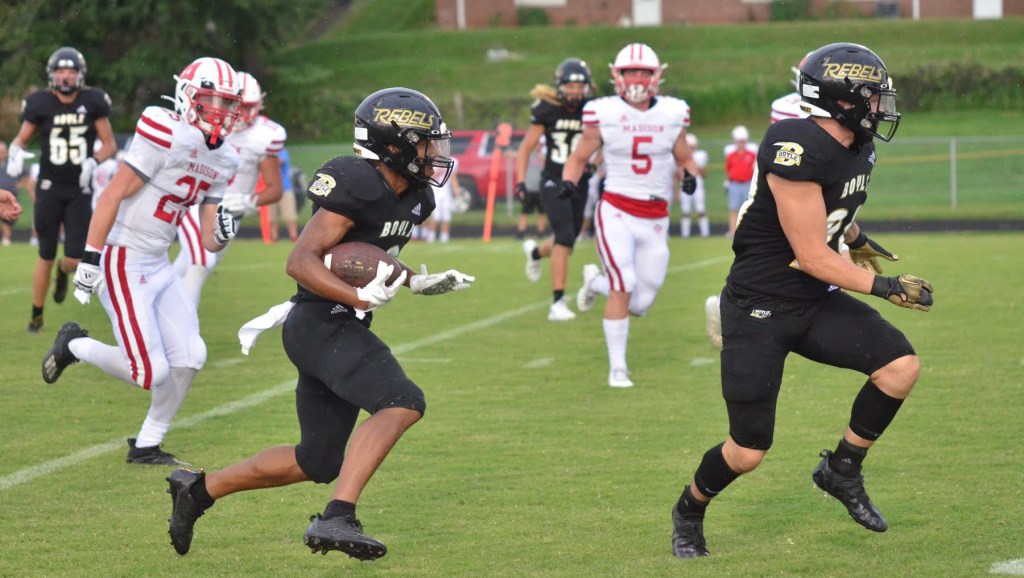 Montavin Quisenberry of Boyle County finds an opening as he runs behind blocker Dalton Stone for a 28-yard gain on his first carry of the game during the first quarter Saturday. Photo by Mike Marsee

HARRODSBURG — Boyle County didn’t get off to a very good start, and yet it did.

Both things were true Saturday as the Rebels rolled to a 50-2 victory over Madison (Indiana) in their season opener in the Little Caesars Fort Harrod Bowl at Mercer County.

The defending Class 4A champions were a little bit languid in the opening minutes, but they quickly got untracked as they scored on four consecutive series to take a 28-0 lead, and they had 43 unanswered points on the board by halftime.

The Rebels weren’t perfect — no matter how much Coach Justin Haddix wanted them to be — but they did more good things than bad and thus left Alvis Johnson Field feeling far better about their performance than they had a year ago when they slogged to a win over Tates Creek in the same bowl.

“You get frustrated, (because) obviously you want to be perfect … but I’m proud of our bunch for the way they responded. They got out and made some things happen,” Haddix said.

Sage Dawson threw four touchdown passes and ran for one TD in his debut as Boyle’s starting quarterback to spark a Boyle offense that rolled up 376 yards even with the final 27 minutes played under a running clock.

Meanwhile, the Rebels’ defense locked down Madison’s offense, holding the Cubs to four first downs and only one serious scoring threat, which came in the fourth quarter.

Boyle won its season opener for the sixth consecutive season, and for the fourth year in a row the lidlifter wasn’t at all close.

In the first series of this game, however, the Rebels moved the ball only 14 yards before punting it away, though Haddix said the mistakes Boyle made early in the game were typical for an opening game.

Their offense didn’t appear sharp until midway through their second series, when Montavin Quisenberry, a sophomore who transferred from Garrard County this summer, broke free for a 28-yard run, then had another 20-yard gain to the 1-yard line to set up a Dalton Stone rushing touchdown.

“We were getting the ball to ‘Tavy’ and he had a nice little run for us, and we were just off from there,” Dawson said. “I think we just had first-game jitters. Everybody was amped up, (including) me.”

Dawson, a junior who transferred to Boyle in winter 2021, said he was more nervous than he had been since his first varsity start at Danville.

Dawson completed 10 of 15 passes for 157 yards and rushed for another 72 yards. His early throws were short, but he executed longer throws as he settled into the game.

“Probably 90 percent of the time he threw it well. He made the easy throw; he didn’t try to throw the perfect ball. Get it to them and let the receivers make some plays; that’s what you want,” Haddix said. “And he showed you what he can do If you’re going to blitz him: He’s going to hitch up and take off and run and make you pay that way. He played really well, and that gives you that dynamic that’s tough to defend.”

Dawson worked well behind a patchwork offensive line altered by injuries that included a center, sophomore Samuel Wade, who started for the first time. There were no exchange issues on snaps, and there was only one sack.

“Sam stepped in and we had some good guys up there playing,” Haddix said. “Those guys are going to fight and compete, and that’s what you want up there. You can have all the size in the world, but you’ve got to have heart and compete, and I felt like we did a better job up front.

Four different receivers — Avery Bodner, Will Alexander, Cole Sims and Austin Bodner — caught touchdown passes, three of them during a 29-point second quarter that triggered the mercy rule. Avery Bodner was the leading receiver with four catches for 66 yards.

“Everybody out there can run and catch the ball. … I can just look and get it to them,” Dawson said.

Quisenberry shined in his Boyle debut, rushing for a team-high 114 yards on only four attempts, one of which resulted in a 53-yard touchdown, and picking up yards on punt returns as well.

“Any time you can get him the ball in space he’s dangerous. He’s lightning in a bottle when he gets out there and gets going,” Haddix said.

Madison, which had only 39 yards, didn’t make it across midfield until late in the third quarter and was stopped at the Boyle 14 early in the fourth quarter.

During that drive, Cubs receiver Drew Hayden suffered an apparent broken leg on a pass play. He was taken from the field in an ambulance.

The Cubs’ running game got no traction, netting just 25 yards on 27 attempts.

“We stopped the run for the most part and made them pass,” Haddix said. “We prob made some mental mistakes, and that’s just what you get playing football.”

Tates Creek rallied from a 21-12 deficit in the fourth quarter to defeat Mercer County 28-21 in Saturday’s second game.

Mercer’s only turnover and two fourth-down conversions during a 71-yard drive led to the winning score, which came with 25 seconds to play on a 5-yard run by MarQuevion Smith.

Thaddeus Mays rushed for a game-high 133 yards and two touchdowns and completed nine of 17 passes for 73 yards in his debut as Mercer’s quarterback. Denim Griffieth rushed for 102 yards and a TD.