Danville must deal with Garrard in home opener 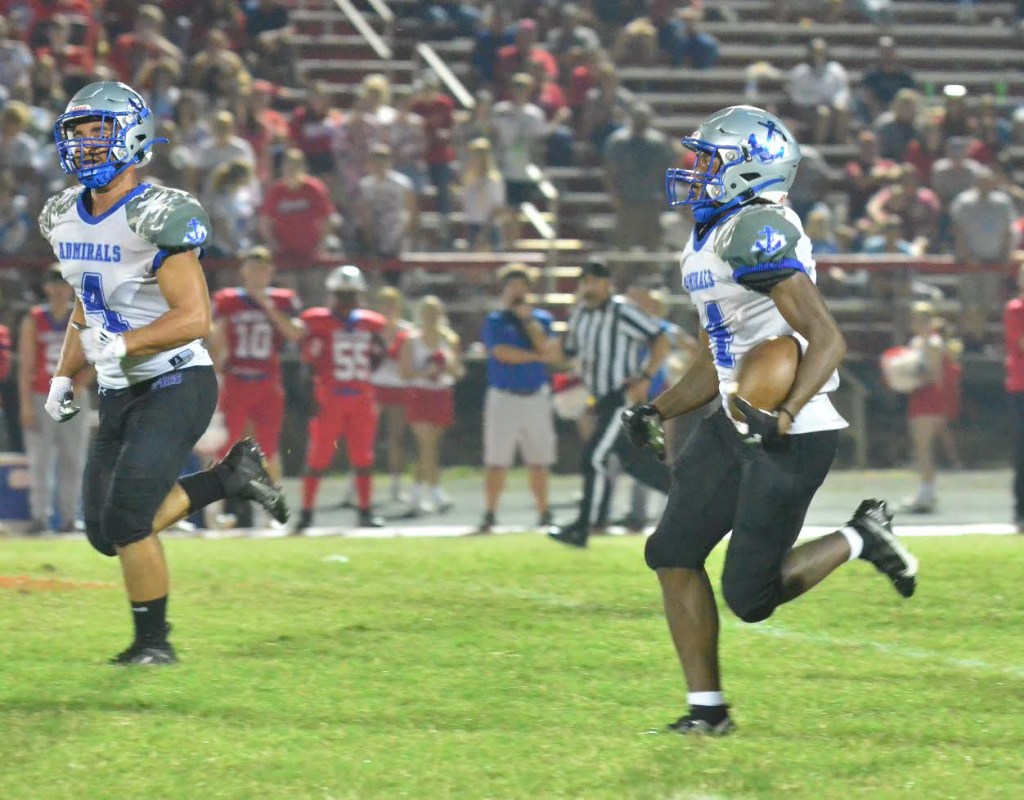 Demauriah Brown of Danville (right) returns a kickoff 90 yards for a touchdown last week vs. Lincoln County as teammate Elijah Kinley looks for someone to block. Photo by Mike Marsee

Danville has the potential to do some exciting things on offense, but a couple of things could get in the way of that this week.

First, the Admirals will have to deal with a Garrard County team that could limit their possessions — and thus their scoring opportunities — in their home opener Saturday.

In addition, they will have to eliminate some of the penalties that led to shortened drives in their season-opening win over Lincoln County.

Danville Coach Mark Peach said improving on the things the Admirals did last week can help them do both things when they host the Golden Lions in the Whitaker Bank Pigskin Classic at Admiral Stadium.

“It’s our first home game, our bowl game, and we’re going to try to improve on the things we learned last week,” Peach said.

That might start with working to cut down on the pre-snap penalties that plagued Danville last week in its 26-14 victory over Lincoln.

Many of those penalties were for delay of game, and Peach said the Admirals drew those flags in part because they were putting in players from their second unit and beyond on the fly.

Cramping was a problem for a number of players, and there were other minor injuries as well that forced Danville to go deep into its bench.

“(The penalties were) a concern for us, but we had so many people go down we were into second-team people and third-team people,” Peach said. “We were using our ninth, 10th, 11th lineman. And some of it was on us, too.”

Peach said the mistakes are correctable, and he said getting a larger number of players in the game could turn out to be a plus.

Garrard, which lost to Somerset 28-14 in its opener, uses a wing-T offense capable of shortening the game.

“With the type of offense they have, they could keep the ball away from us,” Peach said. “They didn’t have that many possessions (against Somerset).”

Sophomore Cameron Peak scored both of the Lions’ touchdowns last week and rushed for 107 yards. He is Garrard’s best breakaway threat, and Malachi Simmons and Justin Adams will also run the ball behind a line led by senior tackle Mason Sulla, one of the region’s best linemen.

The wing-T isn’t as common in high school football as it once was. Peach said it will require the Admirals, who are ranked No. 7 in Class 4A by Bluegrasspreps.com, to be disciplined in their assignments.

Garrard is in its first year under Coach Spencer Crutchfield, a 2005 graduate who spent the past four seasons at Lincoln. The defense is directed by Jeff Hester, a former Garrard head coach, assistant coach and player and the longtime defensive coordinator at Boyle County.

Danville defeated Garrard 23-20 last season and holds a 10-1 lead in the series, with the Lions’ only win coming by forfeit in 2004.

Garrard played in the inaugural edition of what was originally the Constitution Bowl in 1995. Garrard defeated Beechwood 22-20 and Danville beat Russellville 33-7 in that doubleheader.

Danville has a two-game winning streak in its bowl with victories over Lincoln County in 2021 and John Hardin in 2019. Its only home bowl loss since 2014 was to Corbin in 2018.