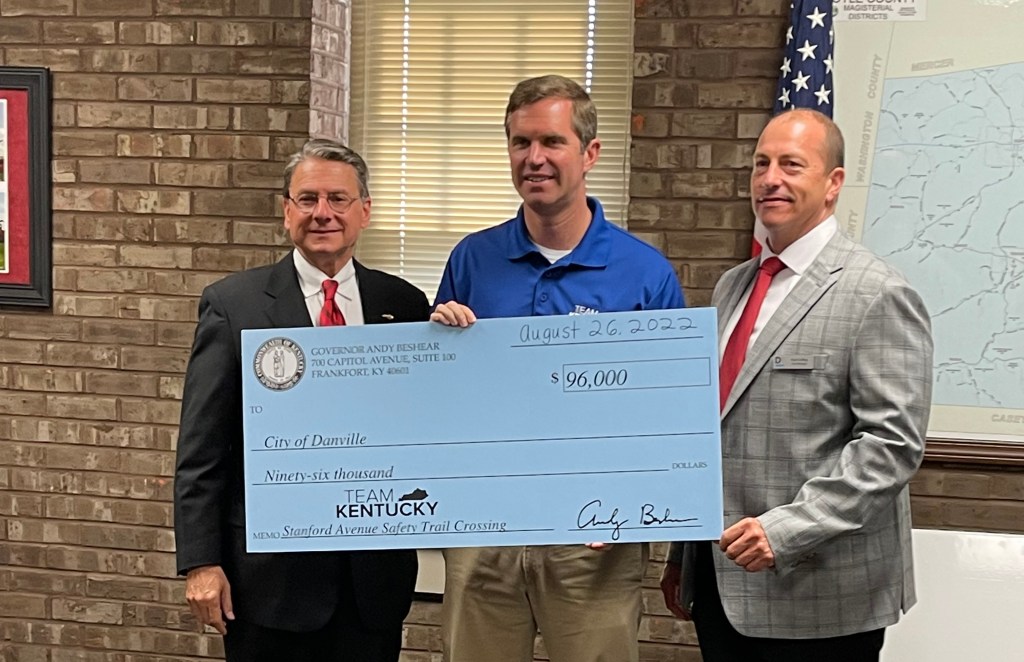 Gov. Andy Beshear was in Boyle County on Friday to help announce two local funding initiatives and celebrate the grand opening of the new fire station.

During the governor’s visit, it was announced that the City of Danville received an award of $96,000 for a pedestrian crossing on Stanford Road.

“This crossing will link the Clark’s Run Trail with the Henson Trail in a safe manner that gives pedestrians an opportunity to enjoy the 6 mile combined trail,” the governor said.

The news was welcomed by local officials.

“This is great news for our community and a simple change that will make this area even more user friendly,” said Rep. Daniel Elliott of Danville. “Connecting these two trails makes them more accessible, user-friendly and safer for those who enjoy getting outdoors.”

There are other benefits to the project, as well.

“This funding will help add a pedestrian crossing to link two popular trails, Clark’s Run and Henson Trail,” Mayor of Danville Mike Perros said. “These trails help teach our young people about nature and allow for a more walkable community. The funding will help Danville citizens for years to come.”

In other news, Garrard County was awarded $50,000 to improve sanitation services in Paint Lick.

The governor also mentioned how Boyle County is part of the largest broadband initiative in Kentucky’s history, referring to his June announcement of 46 grants totaling $89.1 million to expand high-speed Internet across Kentucky. On June 20, Charter Communications was awarded over $49 million in grant funding to expand high-speed Internet to more than 18,000 currently unserved households and businesses in Anderson, Bourbon, Boyle, Carroll, Henry, Jefferson, Jessamine, Lincoln, Madison, Oldham, Shelby, Spencer and Trimble counties. These grant dollars, coupled with the matching funds pledged by Charter Communications, represent an overall project investment of more than $118 million.