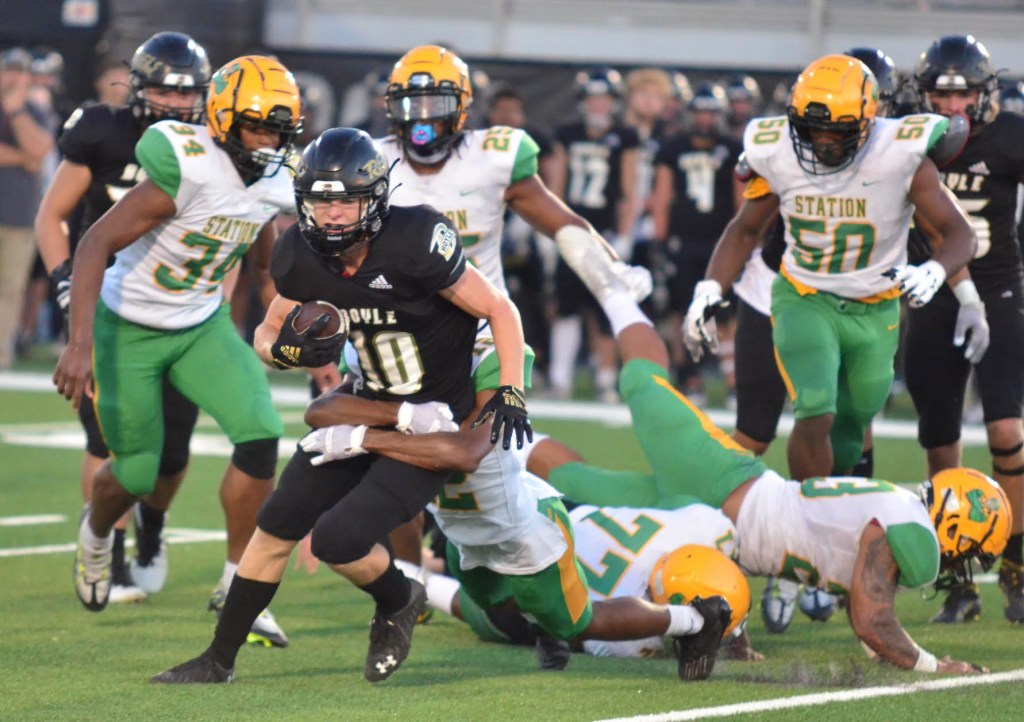 Boyle County was ready for a fight.

After winning their opener in a cakewalk, the Rebels welcomed the challenge they expected to get from Bryan Station in game two, then proved they were up to it.

From a touchdown on the opening kickoff to a clock-chewing ground game to a sound defensive effort, Boyle had virtually all of the big blows in a 36-12 victory Saturday night in the Rebel Bowl.

The outcome wasn’t in doubt after the Rebels scored 21 points in the first 12 1/2 minutes, but the two teams played on essentially even terms over the final three quarters.

“I’m so glad we were in a battle. We got in at halftime and I said, ‘I’m glad we’re in a game.’ We needed to be in a game. This is going to get us ready,” Haddix said. “Our guys responded, and I feel like we got better and we got some great film to learn off of.”

Boyle (2-0) was ready for this game from the get-go, or at least Montavin Quisenberry was. The sophomore returned the opening kickoff 82 yards for a touchdown that ignited most of the near-capacity crowd at Rebel Stadium.

“There’s no better way to start off a game than that,” Haddix said.

Quisenberry was virtually untouched as he bolted toward an opening along the right sideline.

“The ball bounced to me, and I ran up the middle and I saw a hole. The dude fell, and once he fell I knew I was gone,” he said.

And just like that, Boyle was off and running toward its seventh consecutive victory over a Class 6A school.

Bryan Station (0-2) had taken a beating from Frederick Douglass in its opener, but the Defenders are coming off consecutive 10-2 seasons and presented a more arduous test than Boyle had gotten a week earlier.

“It shows us things we need to work on,” Boyle running back-linebacker Avery Bodner said. “We weren’t perfect by any means, but we came out and fought together, fought well and ended the day with a ‘W.’”

Bodner was named the game’s most valuable player after rushing for a game-high 117 yards and two touchdowns on 26 carries and leading the Rebels in tackles with 7.5.

Quisenberry had 180 all-purpose yards, including 115 on kickoff returns, and scored two TDs. He rushed 10 times for 40 yards and caught five passes for 24 yards and intercepted a pass.

The sophomore running back said he has settled in nicely since transferring to Boyle from Garrard County this summer, adding that he got to know his new teammates during their time at camp earlier this month.

“I feel like I’ve been playing here forever,” he said.

Boyle, which had gone three-and-out on its first offensive possession, answered with scores on its next two series. The Rebels ran the ball on 14 of 19 plays in those drives and took a 22-0 lead on two rushing touchdowns by Avery Bodner.

“I feel like our offensive line played really well tonight,” Haddix said. “We were able to run the ball and control the clock, but we’ve got to do a better job when we take our shots of completing them.”

Bryan Station finished with 244 yards but had only about half as many first downs as Boyle and was just 2 for 15 on third- and fourth-down conversions.

Trenton Cutwright, the Defenders’ quarterback, was 8 for 17 for 137 yards and two touchdowns.

Boyle extended its 22-6 halftime lead on its first possession of the second half after Tucker Rush stopped Bryan Station’s Bayubahe Benit in the backfield on fourth-and-1 and Keenan Stewart caught a 26-yard pass to move the Rebels’ offense to the Defenders’ 4-yard line.

Sage Dawson, who threw for 75 yards and rushed for 60, scored on a 4-yard run to give Boyle a 29-6 lead, and Quisenberry scored on a 5-yard run in the fourth quarter.

After the game, the Rebels, who are ranked No. 1 in Class 4A, were already looking forward to their game this Friday against Danville, the first meeting between the Title Town rivals in three years.

“It’s going to be good, tensions are going to be high and we’ve just got to come out and do what we do,” Bodner said.

In the opening game, Cutter Boley threw for 418 yards and three touchdowns to lead Lexington Christian over Mercer County 49-19.

Thaddeus Mays threw for 119 yards (10 for 18) and two TDs and ran for 94 yards and Austin Drakeford ran for a TD for Mercer.