Boyle soccer upends No. 7 Lexington Catholic in 2A tournament 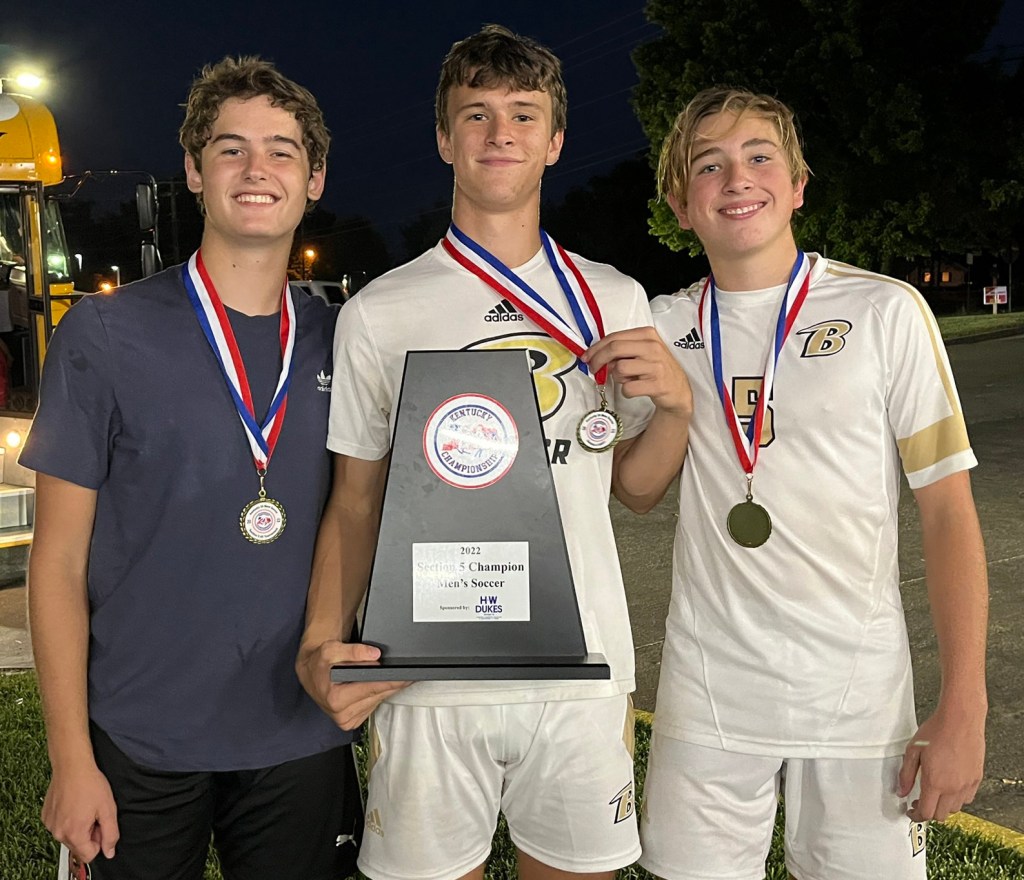 Tristan Compton, Andrew Leines and Bo Little (left to right) were all named to the 2A Section 5 all-tournament team. Leines was named tournament MVP. Photo courtesy of Anthony Wireman

It had been 3975 days since a Boyle County soccer team defeated a major Lexington school.

The Rebels (ranked 38th in the Maher rankings) upset the Knights of No. 7 Lexington Catholic 1-0 on Wednesday at Bourbon County in a penalty shootout to win 2A Section 5 and earn a spot in the 2A state tournament.

In order to advance to this game, Boyle County had to outlast a tough Bourbon County team 1-0 on Monday and then Harrison County 3-1 on Tuesday. Lexington Catholic, the defending champions, were given a first round bye. In the second round, the Knights crushed Western Hills 4-0.

From the first whistle, it was clear that both teams were fired up and ready for an intense 80 minutes of soccer.

The Knights were dominant early and were awarded a penalty after a Catholic forward made the most of contact in the box. A separate Knight forward stepped up and aimed at the bottom right corner, but Rebel goalkeeper McClain Denny made a magnificent full-stretch save to deny him.

The save seemed to breathe life into Boyle County and allowed the Rebels to create a few chances in attack. The best opportunity was a powerful shot by Tristan Compton that the Catholic keeper palmed over the crossbar.

Tied at the half, both teams were locked in and prepared for another 40 minutes. The Knights came out strong again and created a few early chances, but Boyle resettled and the rest of the game was nothing short of a dogfight.

In the end, a winning goal never came for either team. The 0-0 draw gave way to a penalty shootout. The nerves were high around the ground and you could feel the heartbeats of every player get faster and faster as the fateful moments approached.

First up for the Rebels was senior and leading goalscorer Tristan Compton who smacked his shot into the top left corner to slow the Boyle heartbeats and ease the nerves. A Lexington Catholic forward stepped up and calmly scored as well.

The next three takers for the Rebels were Jack Little, Jaxson Pool, and Matthew Britt. Each one of them put their penalty in the back of the net. The next two takers scored for the Knights, but their fourth taker was denied by McClain Denny to open the door to a Boyle County victory.

The only thing left was for senior defender Ben Reynolds to score his penalty. “When I realized I had the chance to win, I had so many things running through my mind,” said Reynolds. “You just have to try and stay calm in those kinds of situations.”

And stay calm he did. Reynolds put his shot into the bottom right corner to win the game. The ensuing celebration was nothing short of pandemonium.

Coach David Ritchie was extraordinarily proud of his team for their effort. “It is an awesome feeling. The buzz and energy the win has created around the program for all the guys is amazing. They deserve it after all the hard work they have put into it.”

After the celebration, Rebels Tristan Compton and Bo Little were all named to the all-tournament team. Centerback Andrew Leines was named tournament MVP after his defensive heroics throughout the three games.

“He literally did everything you could ask for from a defender,” said Ritchie about Leines. “He was vocal, he won headers, he was strong in possession, he made key tackles when they were needed the most. He made a tackle against Bourbon County that kept this team in the tournament!”

“I couldn’t be more thankful to receive the tournament MVP,” said Leines. “This team is so much fun to play with. We have as much team chemistry as any team out there. I truly believe we can come out and get more wins of this caliber.”

The Rebels will face the winner of 2A Section 6 on a date to be determined.