It’s back – the showdown in Title Town! After 2-year hiatus, the battle for Boyle returns 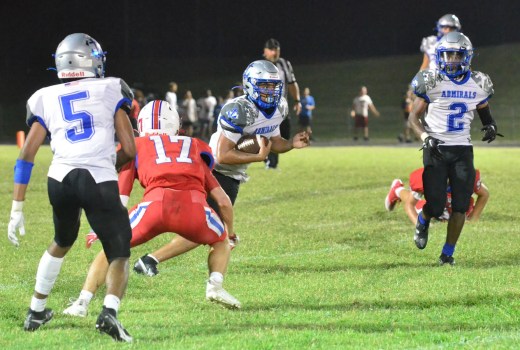 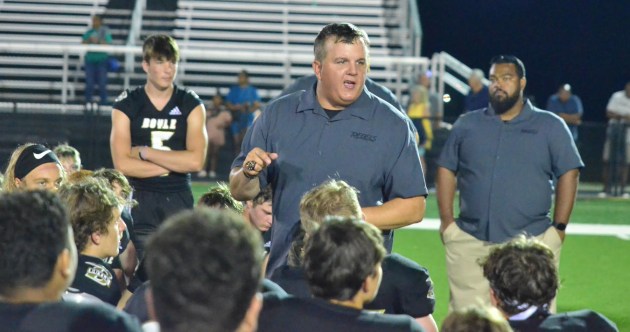 The big game is back.

Some three years after Danville and Boyle County last faced off on the football field, they will renew what has become one of the best football rivalries in the state Friday night at Rebel Stadium.

It’s a game that can’t come soon enough for fans of the two teams, and coaches on both sides are looking forward to it as well.

“It’s one of the marquee match-ups in the state of Kentucky,” Danville coach Mark Peach said. “You’ve got two schools in the same county that have combined for 21 state championships. That’s pretty unique.”

This will be the first Title Town showdown for both Peach and his Boyle counterpart, Justin Haddix, though both coaches said they were aware that this was one of the state’s big games even when they were playing and coaching at other schools.

“A lot of guys talk about this game,” Haddix said. “They all know what it is.”

It is — and has been for almost 30 years — a can’t-miss game on the Kentucky football calendar. As Boyle took steps toward becoming a powerhouse in the mid-1990s, it butted heads with a Danville program that was already at the pinnacle.

That changed Danville-Boyle from just another city-county rivalry to a match up that almost always makes the annual preseason lists of the best games on the schedule.

“Both teams are really good, both teams have got great tradition. If you look in the past at what they’ve done, it’s been exceptional,” Haddix said.

The teams’ last meeting, however, wasn’t much of a game at all. Boyle rolled to a 59-0 victory at Danville on Sept. 6, 2019 in the most lopsided game in series history.

So much has happened in the 1,092 days since that game. Boyle has lost only two games since that night; Danville had seven losses that season but bounced back with eight wins last year.

There have been coaching changes at both schools: Haddix came to Boyle in 2020; Peach took over at Danville in 2021.

And the Covid-19 pandemic put the rivalry on ice in consecutive seasons, interrupting the series for the first time since it began in 1965.

The 2020 game was initially moved to the end of the schedule when regular-season schedules were reduced from 10 games to eight, then removed from it when both teams attempted to make up previously postponed district games.

The series was set to resume in 2021, but it was called off on Monday of game week due to Covid-19 issues within the Danville program.

“It was crushing, but we understood,” Peach said. “We were just following the protocols asked of us at that time.”

Now both teams are looking forward to seeing the other side again, and both coaches said it’s an important game for the schools and the community.

“There’s a lot of tradition,” Peach said. “Great teams, great coaches, great players have all been a part of this game.”

Bragging rights play a part, too.

“Kids today, you’re in the same neighborhoods, you see the other guy around town, it makes it more competitive,” Haddix added.

Peach acknowledges that the Admirals are underdogs but said their game against the Rebels presents a great opportunity not just to spring an upset but to see how they measure up against a high-level opponent.

“For us, it’s a great opportunity, a great experience,” Peach said. “Everything we do needs to be about the postseason. State championships are won in week 15; they’re not won in week 3. We want to win them all, but everything is about us learning what we do well, what we’re not doing well and trying to improve on those things.”

Peach called Boyle “just a complete football team” and said the Rebels’ many looks on offense will be a handful for his team.

“Today we’re just going to work on trying to get lined up,” he said. “In two games and a scrimmages they’ve shown 35 formations, and I’m not even counting all the motions.”

Haddix said Danville’s offense is a challenge for opponents as well.

“I’ve watched his teams, and they’ve always had some sort of option style with it, they’ll spread it sometimes,” Haddix said. “They’ll line up three backs, and on the next play they’ll spread it out. It keeps you on your toes defensively.”

The Rebels will have to contend with the Admirals’ speed, as has been the case so often over the years, but also with their size.

“They’ve got speed all around and they’re big on both sides of the line of scrimmage,” Haddix said.

Danville’s best weapon so far this season has been Demauriah Brown, the sophomore running back who has rushed for 259 yards and three touchdowns. Brown caught a 67-yard TD pass last week in the Admirals’ win over Garrard County and has taken a number of snaps in the wildcat formation.

The Admirals turned to a new quarterback last week, giving freshman Jakeem Ray his first start. He threw for 97 yards and rushed for 34.

“He’s a home run hitter,” Haddix said. “If he gets out on the edge he’s gone, so we’ve got to do a great job containing him. And he’s not the only speed guy out there.”

Peach said Boyle has an array of weapons, but two that have stood out to him on film are quarterback Sage Dawson, who has thrown for 301 yards and five TDs and rushed for 112 yards and two TDs, and running back Montavin Quisenberry, who has scored rushing, receiving and returning kickoffs.

Danville leads the series that began in 1965, two years after Boyle opened. The teams played to a scoreless tie in that first game at Farris Stadium, and the Admirals have won 35 of the 57 games played since.

But the Rebels have had their way more often than not since November 1996, when a playoff victory ended a 19-game Danville winning streak — the longest for either team in the series.

Beginning with that game, Boyle has won 17 of the past 24 meetings, with Danville’s last win coming in 2017.

Only a few of those who will be on the field Friday took part in the last Boyle-Danville game, so players are both sides are eager to take part in the rivalry for the first time.

A story in Tuesday’s Advocate-Messenger detailed a fight that took place on the field following Danville’s victory over Garrard County last week. The altercation was initiated by an adult.