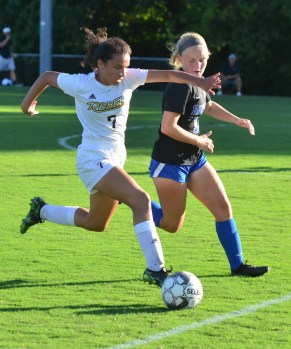 Reagan Britt (7) of Boyle County keeps Danville’s Emma Baum at bay as she advances the ball during the first half Thursday. Photo by Mike Marsee 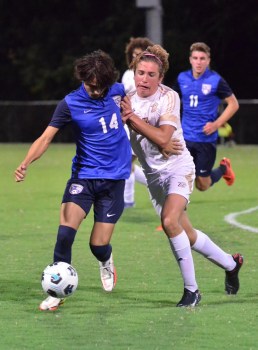 Neimah Esponza (14) of Danville and Jack Little of Boyle County compete for the ball during the first half Thursday. Photo by Mike Marsee

One of the Constitution Cups never made it across town Thursday night, but the Boyle County boys brought pretty much everything else they had.

The Rebels threw it all at Danville in an impressive first-half performance that allowed them to retain the Constitution Cup — which they forgot to bring with them — for a third consecutive year.

Boyle went on to a 6-2 victory at Reynolds Field that completed a sweep of the annual boys-girls doubleheader with Danville.

The Boyle girls did their part earlier in the evening, rolling to a 9-1 victory that was their second straight Constitution Cup win.

The Boyle girls hold a 16-2 lead in the series with Danville and the Boyle boys lead 12-5-1 since  the Constitution Cups were first awarded to the winners of the regular-season rivalry games in 2005.

Tristan Compton provided much of the offensive firepower in a dominant first half, scoring four goals in the first half and five in all for Boyle.

Compton got two of the three goals the Rebels put up in the first 10 minutes to take control of the game.

“The team definitely came out with a lot of energy, and our pregame talk with Coach (David Ritchie) was definitely very motivational, so our team came out very strong and we were able to put a lot on them,” Compton said.

Boyle (6-2-2) took advantage of some mistakes by Danville (6-2) to take its 3-0 lead, and Ritchie said the Rebels began the game exactly as he hoped they would.

“I thought we really did a good job of putting their midfield under pressure. We dumped balls in the box and put pressure on them and took advantage of some early errors by their team,” Ritchie said.

Compton, who already led Boyle with nine goals in its first nine games, scored in the third and 10th minutes and J.D. Cooley scored in the fourth minute for the Rebels.

Danville Coach Brent Beauman said his team simply didn’t match Boyle’s intensity in the first half, and that led to some critical breakdowns.

“Mistakes happen,” Beauman said. “Lots of times in life you’ve got moments when you’ve got to step up or they’re going to step on you, and we didn’t step up that first half. They really brought it to us. … They were playing much more aggressive, much faster, and we didn’t match it in the first half.”

Compton scored again in the 25th minute and once more in the final seconds of the first half to give Boyle a 5-1 halftime lead. He added a fifth goal in the 53rd minute, giving him the highest goal total for any player in a boys Constitution Cup game.

However, the Admirals righted themselves and played on even terms with the Rebels in the second half.

“There was a huge difference in the second half in just their intensity and their drive and competitiveness,” Beauman said.

Danville’s Iain McAlister scored the game’s final goal on a penalty kick in the 55th minute. Carter Dilbeck got the Admirals’ first goal in the first half.

Micah Brown had three assists, Jack Little had two and Cooley had one for Boyle.

“I think that other than about one game this season we’ve outworked the other team every time,” Ritchie said. “We really stress that even if we’re not necessarily the most technical or whatever, we will be the hardest working team on the field, and I feel like I see that almost every game.”

What the Rebels didn’t see Thursday was the Constitution Cup trophy, and their first-year coach took the heat for that.

Boyle will play a Kentucky 2A Championships sectional game Wednesday at Rowan County — they swept three games to win the regional title last week — for the right to advance to the 2A state tournament later this month.

In a battle of two teams that don’t have it all together yet, Boyle had more than enough.

Reagan Britt and Addison Hazlett each had a hat trick as the Lady Rebels won by the largest margin of victory in a girls Constitution Cup game.

Boyle (5-3) was without four regular players and Danville (1-8) was missing two, but this game was one-sided from the outset. The Lady Rebels led 2-0 in the 13th minute, 4-1 at halftime and 6-1 less than 10 minutes into the second half.

“Both teams are beat up a little bit, but I was proud of how we kept our composure,” Boyle Coach Brian Deem said. “We possessed the ball well, (and) we found the gaps we’ve been working for all week.”

Boyle-Danville girls games have been consistently close in recent years, and the Lady Rebels had scored only 10 goals in their previous nine games against the Lady Admirals since 2017.

“The Danville game is always notorious for us being freaked out, but there was never really a moment tonight that I felt like we were freaked out or intimidated,” Boyle senior Karlee Johnson said. “I think it really has to do with the relationships we’ve built, and we do have a lot of trust in each other.”

Abigail Gnann, Boyle’s only other senior, said good chemistry has worked in the Lady Rebels’ favor this season and did so again Thursday.

“Everyone is super close, and we expect a lot out of each other,” Gnann said.

Maggie Burke, Ellery Taylor and Maggie Gnann added second-half goals for Boyle, and Johnson and Abigail Gnann were among the Lady Rebels with assists.

Deem said he likes the way his team is playing so far this season against a typically tough schedule.

“They’re competing. They’re not backing down, They’re not finding excuses,” he said. “They’re answering the challenges that the staff’s presenting to them. They’re working in practice to try to get better.”

Danville Coach J.D. Smith said the Lady Admirals made things worse on themselves with some “silly mistakes,” but he said he has seen signs of improvement in his team even during a difficult start to the season and looks forward to further progress once the roster is fully intact.

“We haven’t had our full team yet, and only being down two players is the most we’ve had since the very first game of the season,” Smith said. “I do think there (has been) improvement. I think we’re seeing it in some of these players, and I think once we get our full group back together … then maybe we’ll be able to build some momentum and get things going.”