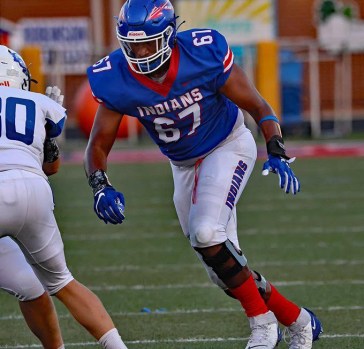 Kentucky commit Malachi Wood of Madison Central has good speed for an offensive lineman and is a “student of the game.” Photo courtesy of Jeff Drummond/Cats Illustrated 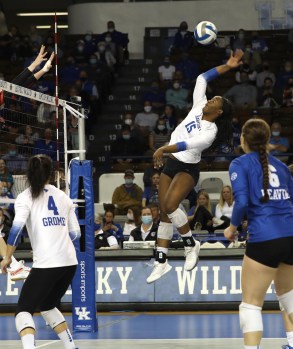 Azhani Tealer knows what volleyball has done for her and feels a responsibility to give back all she can. Vicky Graff photo

Madison Central offensive lineman Malachi Wood got a Kentucky scholarship offer from UK recruiting coordinator Vince Marrow on May 13, 2021, and verbally committed to the Wildcats in March.

The 6-8, 300-pound Wood is the highest rated Kentucky high school offensive lineman in the 2023 recruiting class and his coach, Mike Holcomb, says being a UK commit has provided extra motivation for his star player.

“We are so close (to UK) that he was able to be around them in the summer when he was allowed,” Holcomb, who got his 300th win when Madison Central beat Lexington Christian to open the season, said. “They stay in great touch with each other. Being a Kentucky commit has been a huge positive for him.

“He’s a pretty quiet kid all the time. He’s not real outgoing. He just does his business and wants to make sure he is improving.”

Holcomb took over at Madison Central for the 2021 season and says Wood has taken “coaching great” since he arrived.

“He has his body in great shape. His strength has come on unbelievably well because of the work he does. He’s a real student of the game and a very intelligent player,” Holcomb said. “He’s a plus-plus in my book. He’s also still a young kid and should get bigger and stronger at Kentucky.”

Holcomb believes Wood is “tailor-made” for the offense Kentucky has now.

“He has outstanding reach because his length is so good,” the Madison Central coach said. “His foot speed is good. He played basketball growing up before he got out of that last year because of some back spasm issues, so he just decided to concentrate on football and started working out even more.”

Wood is also playing in the defensive line for Madison Central and had four tackles, including two solo stops, against LCA.

“He’s never played on defense before but we really needed him there to  help some,” Holcomb said. “His main focus will always be left tackle on offense. But we want him to get some defensive reps. Trying to throw a pass over him with his hands up is not very easy.”

Holcomb won three state championships at Breathitt County in 1995, 1996 and 2002 and his teams had a 42-game win streak from 1995-97. One of his former players is current Boyle County coach Justin Haddix, who threw 58 scoring passes in the 2002 state title season.

Holcomb says Wood is one of the best high school players he’s seen, especially when you talk about athleticism and size.

“His speed is really good and his strength will just keep getting better as he gets older,” Holcomb said. “He has a huge upside. Sometimes in high school a kid his size blocking a 5-10 kid who has a high  motor running wide open and that can be tiring.

“He has gotten better and better since I got here. His technique is always improving because he’s such a student of the game. He does a lot of things to make himself better and I think he’ll be great at Kentucky.”

So does former Madison Central coach Mark Scenters. He has one son a year older than Wood and one a year younger.

“My first memory of Malachi is just a short, little kid playing Little League baseball. Then one summer he grew three or four inches and just kept growing,” Scenters said. “He just exploded and he was always athletic. He’s just a great kid.”

Scenters coached Wood as a freshman and sophomore. He was also a Madison Central assistant coach when Larry Warford arrived as a sophomore transfer and coached the future UK offensive lineman for two seasons. Warford was an all-SEC player at Kentucky and made the Pro Bowl three times during a seven-year NFL career.

“Both of them have the commonality of those God-given size traits from the Lord’s blessing and good genetics,” Scenters said. “Larry was 6-3, maybe 6-4 but had long arms and that low center of gravity that made him very mobile. He was a brawler in his early days at UK but kept working on his game and became very athletic for his size.

“Malachi has that God-given height and length on a frame that can probably carry even more weight and it’s going to be neat to see how he develops in a strong collegiate conditioning program. He has all the tools you could ever want.”

Scenters says like Warford, Wood is a “hard worker dedicated to improving” and he’s anxious to see what lies ahead for Wood.

“Everything is based on how much work individually you put in and he will work. He’s already a talented, athletic  young man who moves well for any size but particularly well for a guy that big. The tools are there. I believe in the kid just like I believed in Larry. I think Malachi certainly has the opportunity to one day be the kind of player that Larry was.”

Junior cornerback Carrington Valentine could play a huge role in what success the Kentucky defense has this season after a sometimes difficult sophomore season.

“You just have to have a short memory playing corner,” said Valentine. “My sophomore year I had to learn to have a short memory. As the year went on, I got more comfortable.  I would not say there was a time when I hit an all-time low but there were times I had mixed feelings in my head. It didn’t take long to get out of that and  once I did I was back.

“Receivers are going to catch balls. As long as you compete and don’t lay down, that is the definition of a hard corner.”

Valentine won’t share his personal goals other than to compete daily.

“I know my personal expectations and I want to make big strides. I want to look like an elite NFL prospect my  junior year. I feel like my sophomore year was solid but this year I feel confident enough that I can have people looking at me and that is by being an elite level talent,” Valentine, who started 12 games and had 61 tackles last year, said.

“I have a lot of goals in my phone. Some are season goals, some are with people we play receiver-wise, I have a mixed variety of goals I want to meet.”

Any particular receiver he is anxious to face this season?

“I am not going to speak on it right now. Come game time you will see,” Valentin said.  “I am looking forward to guarding everybody but there are a select few guys when I look at them I see the (NFL) money.”

to career in volleyball

Kentucky volleyball coach Craig Skinner asked senior middle blocker Azhani Tealer and others on his team to write how volleyball had impacted their lives. For Tealer, that was an easy assignment.

“I’ve done the most incredible things from volleyball. I’ve traveled across the world, I’ve met my best friends, I’m getting my education paid for, and I’ve done all these crazy things thanks to the sport,” Tealer said.

“I really feel a responsibility because I’ve gotten so much, to give back to the sport, to put it on the highest pedestal that sports can be on. Everything that’s given me, I just want to give it all back and help propel the sport for all the younger people.”

Skinner says there is not a “more explosive athlete” on No. 11 Kentucky than Tealer. But he’s even prouder of leadership skills and effort.

“She is someone who cares a lot about not only her development but the team development,” Skinner said. “She can score points. She can block. Just her willingness to give of herself daily and more is something young players can look up to.”