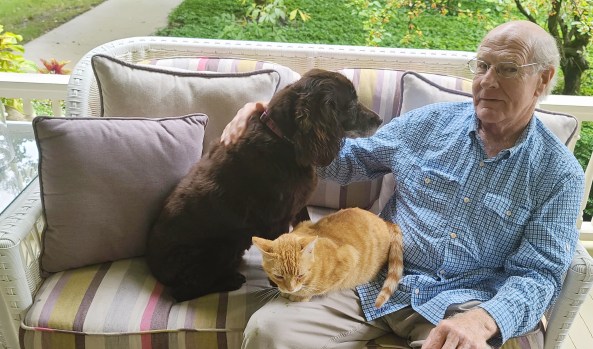 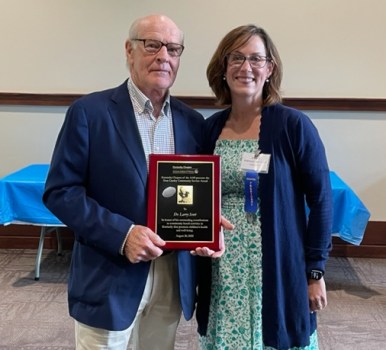 Dr. Larry Scott receives the Don Cantley Community Service Award from Dr. Jaime Pittenger-Kirtley of the University of Kentucky College of Medicine and president of the Kentucky chapter of the American Pediatrics Association. Photo submitted

Humbling and an honor are just two ways that retired Danville pediatrician Dr. Larry Scott described how it felt to be awarded the prestigious Don Cantley Community Service Award by the Kentucky Chapter of the American Pediatrics Association.

The Kentucky Chapter initially created the award to honor of Dr. Don Cantley, a former president of the chapter and a pediatrician whose work included making breakthroughs in care for children with behavioral disorders and founding school based clinics for children who were unable to receive proper medical care. The association started the annual award in 2006 and Dr. Larry Scott is the 16th doctor to receive the award.

Dr. Scott said he always preferred being “in the trenches” rather than working as a researcher, but he wasn’t sure what he wanted to specialize in until he had spent some time in medical school.

“When we were at the university hospital and at veteran’s hospitals we primarily saw people with chronic illnesses,” he said

“We could stabilize them but we couldn’t heal them.

“In pediatrics, you knew that almost all the kids were going to have a full life ahead of them when they were discharged. It was a much happier climate.”

He also noted how the practice of medicine has changed throughout his nearly 50 years running a practice.

“When I first came to town, I knew nobody. No friends or family,” he said. “I had only met a few of the doctors at the hospital.”

He said his initial support came from a hospital administrator who was eager to have a pediatrician nearby for the first time.

“The nursing staff was willing to learn new techniques,” he said.

“Prior to my arrival, if a baby was in distress they would do what they could then try to get it to Lexington as fast as possible. Even with the support of the hospital, his first year running his practice was difficult. Both my wife and I came from farming families with no financial resources. There was a bank president who is still my friend today who floated me for my first year. Things picked up, and I got my first partner after one year and that spread the workload out.”

He mentioned how technology has changed the field of medicine during his career. One of the biggest changes that came from technology was in treating cancer.

“Half of the acute leukemia patients died 50 years ago,” he said. “Now, in some cases 95 percent are cured.”

He believes it is now harder for new doctors to start solo practice due to an increase government and insurance regulations. The field also has a different face now than it did when he entered it.

“In my class, 7 percent of the students were females,” he said. “Today, it’s over 50 percent females.”