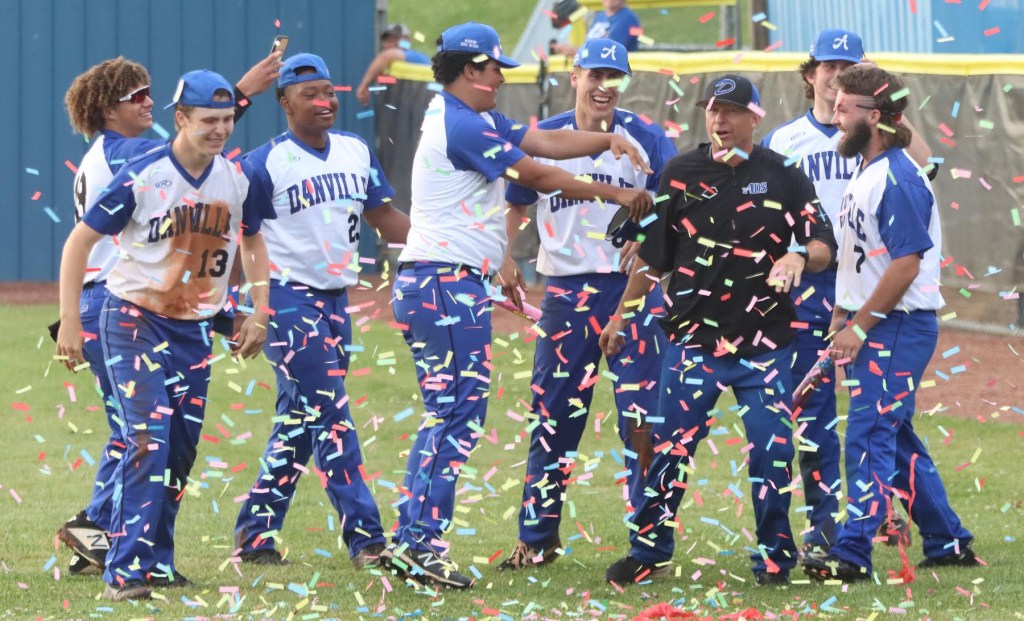 Danville Coach Paul Morse celebrates with some of his players after the Admirals defeated Paintsville on May 26, 2021 for his 500th career win. Photo by Mike Marsee

When Paul Morse was asked to commit to the Danville baseball program for more than one year, he couldn’t know how long that commitment would last.

Twenty-two years later, Morse is walking away as the winningest coach in Danville history and one of the most successful coaches in Kentucky.

Morse resigned last week, citing both personal and professional reasons as factors in a decision he had considered even before the season was over, but didn’t make until recently.

“It’s kind of the perfect time,” Morse said. “It just took a while over the summer to figure out for sure I wanted to do it.”

The Admirals enjoyed some of their greatest successes over the past two seasons, going 70-9, reaching the state tournament in consecutive years and getting to the semifinals in 2021.

Morse’s son Brady was part of those teams, and the father said the son’s graduation this year was a factor in his decision to leave the dugout.

“That’s definitely a big part of it,” Morse said. “Over the summer I’ve just been reflecting on it. It’s such a great couple of groups we’ve had here lately. They’ve all been great, but a lot of personal friends as well as parents are moving on (from the past two teams).”

Morse said his father’s failing health was also a factor — Phil Morse died Aug. 8 at age 91 — as was his desire to see his son play collegiate baseball at Bellarmine University.

“I’ve talked to a lot of coaches that have gone through this time in their life. Some of them were able to watch their kids play and some weren’t, but all of them I talked to said you have to be there as much as you can,” Morse said. “I know how it made me feel as a son to look up and see my mom and dad in the stands cheering me on. I just want to be there whether he’s playing or whether he’s sitting on the bench in a support role.”

Morse said another consideration was that some of the assistant coaches on a veteran staff made up of former head coaches and former players have moved on.

“Part of the success of our program has been because we’ve had a group that has stuck together,” he said. “My core (of coaches) has been with me for 15 or 20 years. That stability has been there for years and years and years, and that has helped us be successful,” he said.

“The combination of all that has been weighing on me, and I’ve been feeling the timing was right.”

Morse, a 1992 Danville graduate who still holds state records for career home runs, pitching wins and strikeouts, was fresh off a seven-year career in professional baseball when he was asked by then-athletic director Sam Harp to take over the Danville program for the 2001 season.

“He said, ‘We’d love for you to do this, but I don’t want it to be a one-year thing,’” Morse said. “Coach Harp gave me a chance to do it … and I told him, ‘You’re going to get everything out of me from day one to better this program. I guarantee he didn’t think I’d still be there 22 years later.”

He said he was grateful to have the support of Harp and then-Danville superintendent Bob Rowland when he began his coaching career, as well as the support of successive administrators.

He said he was even more thankful for the support of his wife Tamme.

“She made a lot of sacrifices for me to be able to do this,” Morse said.

Morse, 49, said he will continue to teach and coach through his Morse Baseball Academy. He also said he’ll help the Danville program from time to time on a volunteer basis, saying he wants the program to continue to thrive.

“It’s just a matter of still giving those kids an opportunity to be successful and motivating them, having the right coaches in place to keep providing them the opportunity to develop and get better,” he said.

Morse said one of the things he’s most proud of is that so many Danville players have gone on to play in college, including nine in the past two seasons.

“One of the things we’ve really pushed – and I hope this will continue – is knowing if they want to go to the next level, it doesn’t matter how fast or how strong or how good they are, if they’ll come in and work and take care of their grades and do the right things, I’ll find you a place to play college baseball,” he said.

He’s also proud of the relationships between current and former players and parents that he said has strengthened the program and continues to help young players.

“Just seeing guys when they go out to the little league fields at Millennium (Park), seeing them out there sharing their knowledge of what they’ve learned, how they’re running their practices, those are the things I’m most proud of,” he said.

Morse said he struggled with the fact that he never made it to the major leagues after seven years in the minors, but he has come to believe Danville is where he was meant to be.