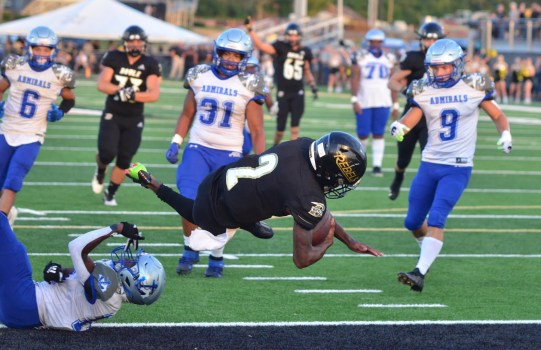 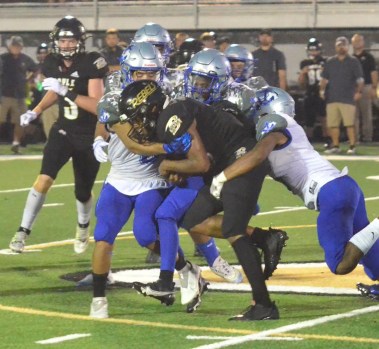 A group of Danville defenders drags down Boyle County’s Montavin Quisenberry on a punt return during the second quarter Friday. Photo by Isabella Murray

Boyle County had waited two years for a shot at Danville, and the Rebels weren’t willing to wait one more minute.

The Rebels used an unconventional play to make an unmistakable statement on the first play from scrimmage Friday night to take control of the first Title Town showdown since 2019.

A halfback pass turned into a touchdown 17 seconds into the game that set the tone for a 41-7 Boyle victory in the renewal of one of Kentucky’s most compelling football rivalries.

“We’ve been waiting two years to play them, and we knew we needed to come out hot with something big, and that’s exactly what we did,” Boyle wide receiver Cole Sims said.

Sims got behind the Danville defense, caught a pass from Montavin Quisenberry and raced some 45 yards to the end zone to complete a 66-yard scoring play that started this game with bang.

The play brought Boyle’s share of a standing-room only crowd to its feet and gave the host Rebels exactly the sort of shot across the bow that Coach Justin Haddix wanted.

“That was the plan. We wanted to do that,” Haddix said. “That’s always the plan, I think, when you get going.”

There was much more to Boyle’s victory than that, of course. The Rebels scored on five of their first six possessions — three times they needed only a single play to do so — and six times in all in the first half to take a 41-0 lead.

“It was definitely worth the wait,” Sims said.

Boyle (3-0) claimed its third consecutive victory in the crosstown series that had been on hold for two years.

Issues related to the COVID-19 pandemic forced the cancellation of Danville-Boyle games in 2020 and ’21, and players and fans on both sides of the 57-year-old rivalry were ready for the two sides to get together again.

At least 4,000 people filled Rebel Stadium to overflowing for the first meeting in 1,092 days between neighbors who have brought a combined 21 state championships to what has become known as Title Town.

Sage Dawson, who was a freshman at Danville the last time the Admirals and Rebels squared off, ran for a touchdown on Boyle’s second series and threw two touchdown passes in a 28-point second quarter that made this a running-clock game.

Quisenberry rushed for two touchdowns, Sims caught two TD passes and Avery Bodner had a TD run and two interceptions for the Rebels, who have won three games this season by a combined score of 127-21.

“I’m very proud of our guys, the way they executed. I felt like we did a lot early,” Haddix said. “We did leave some points out on the field, and we’ve got to continue to get better at (that). But offensively we were getting in a rhythm, and I think we’re getting there.”

Little went right for Danville (2-1) until the second half, when the Admirals stopped Boyle’s first-team offense twice, then scored their only touchdown against the second-team defense.

But Danville Coach Mark Peach said his young team could learn much from this game against what will likely be the toughest opponent they will face all season.

“We had some young guys that got some great experience tonight,” Peach said. “We’ll look at what we did well here, and we’ll look at the mistakes we made and try to learn from them.

This was the second straight game in which Boyle scored in the opening seconds — Quisenberry returned the opening kickoff for a touchdown in its win over Bryan Station — and this time it came on a play that was put into the offense only two days earlier.

Haddix said he installed the play on Wednesday, and just hours before Friday’s game he decided it would be first in the series of scripted plays the Rebels would use at the start of the game.

“We knew we were going to get their best game … and we had to come out and strike quick and execute,” he said.

Quisenberry drew the attention of the defense when he took the handoff from Dawson and bolted toward the right side before pulling up to throw to Sims.

“We wanted to make sure we sold the jet sweep and got the little pass off of it, and we executed that really well,” Haddix said.

“It worked way better (in the game) than it did in practice,” Sims added. “It’s huge to do something like that, especially in a high-emotion game like (this).”

It was a damaging blow to a Danville team looking for momentum in the early going.

“Well, it doesn’t help,” Peach said. “It was a great play on their part, and they executed it really well. That kind of put us in the hole early, and that’s one thing you don’t want to do on the road.”

Bodner’s second interception in a seven-minute span led to a 32-yard TD run by Quisenberry, and moments later Dawson hit Sims with a 40-yard TD pass that made it 34-0.

Meanwhile, the Boyle defense held Danville to 68 first-half yards and forced three turnovers, including a fumble recovered by the Rebels’ Cooper Brummett.

Danville’s Braidin Baughman intercepted a tipped pass in the first quarter, and its defense stopped Boyle on downs in the red zone late in the second quarter.

But the Rebels got the ball back at the Admirals’ 17 with 33 seconds to play and got their final TD on an 11-yard run by Quisenberry just before halftime.

“We could have folded the tent and we didn’t do that,” Peach said. “We had a nice defensive stop near the end of the half and got some stops in the second half.”

Boyle outgained Danville 410 yards to 180. The Rebels rushed for 221 yards, led by Quisenberry with 99 yards and Bodner with 72. Dawson completed nine of 16 passes for 105 yards, with Keenan Stewart leading the team with four catches.

About half of Danville’s offensive yardage came on Demauriah Brown’s 92-yard touchdown run early in the fourth quarter.

Brown had a game-high 136 rushing yards on 10 attempts, and Jakeem Ray completed one pass for 7 yards in his second start at quarterback.

“I said, ‘In the second half let’s try and get some stops, let’s get a touchdown on the board,’ and we were able to do a lot of those things. I was proud of our guys for their effort in the second half,” Peach said.

Boyle has won 10 of the past 13 crosstown rivalry games, though Danville still leads the series 35-23-1.

This was the first taste of the Title Town rivalry for both head coaches, and they agreed that the atmosphere surrounding Friday’s game added to the excitement.

Haddix said he was happy with the way Boyle’s entire school got behind the game.

“I think that goes a lot to our school culture. It wasn’t just our football team, it was the whole student body, which makes it exciting,” he said. “We’ve always got a good crowd, but obviously it makes it a little bit special when it’s your neighbor.”