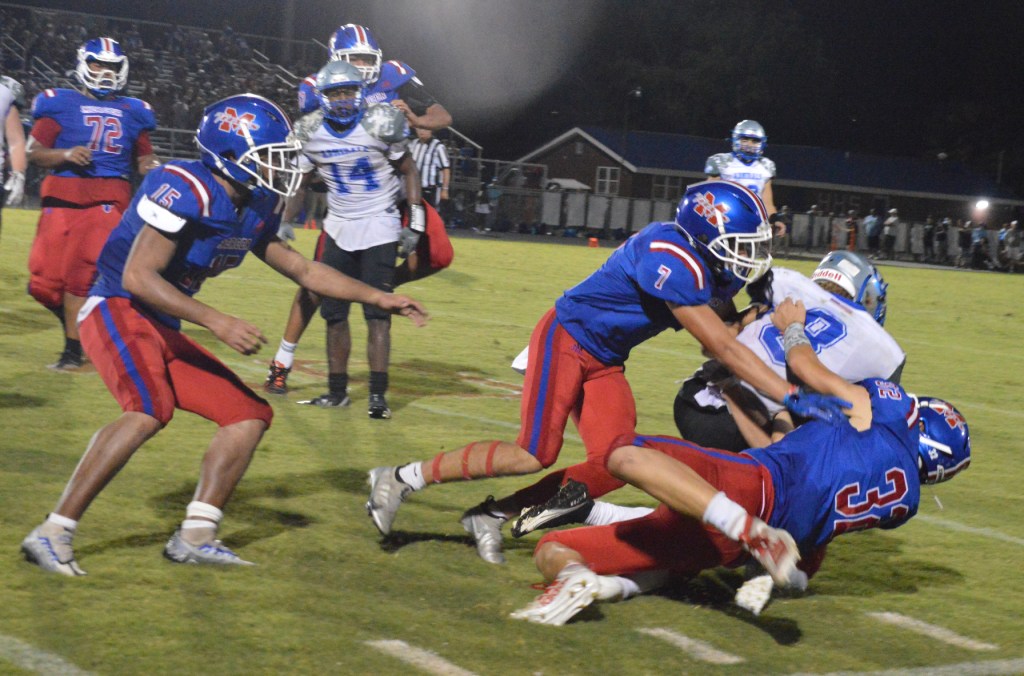 HARRODSBURG — The tension in the stadium was tangible. Everybody present was holding their breath.

The Titans and the Admirals were tied at 14 apiece. But in the very last few seconds of the game, everything would change.

Gavin Wilson kicked a 32-yard field goal as time expired Friday night to give Mercer County a 17-14 victory over Danville in a grueling game at the Alvis Johnson Field.

Danville (2-2) battled back from a 14-0 deficit to tie the game early in the fourth quarter, only to see the game slip away in the final seconds when Mercer (2-2) marched downfield to set up Wilson’s winning kick.

“It was a knockdown, dragout,” Mercer Coach Craig Yeast said. “It was down to the wire, and I’m just happy that we were able to kick the field goal and come out with a win.”

Danville struggled with penalties, including a series of them during Mercer’s game-winning drive. Four consecutive flags against the Admirals cost them 48 yards and allowed the Titans to move into field goal range.

“We had a couple crazy flags in the last minute that honestly lost us the game,” Danville running back Braidin Baughman said.

Baughman scored both of Danville’s touchdowns, rushed for a game-high 120 yards and had an interception.

Mercer was led by quarterback Thaddeus Mays, who rushed for 106 yards and two touchdowns and completed seven of 22 passes for 87 yards. Mays has rushed for 465 yards and passed for 511 yards in the Titans’ four games.

Mays staked the Titans to a 14-0 lead in the first quarter. He ran 7 yards for their first score, and after Mercer got the ball back by recovering a Danville fumble, he scored on a 2-yard run.

In the second quarter, the Admirals reacted to the pressure put on them by the Titans and scored their first touchdown on a 56-yard run by Baughman that pulled Danville within 14-7.

Baughman tied the game on an 11-yard touchdown run with 9:33 remaining.

“It felt good,” Baughman said of his big game. “I’m always gonna go out there and help my team the best I can.”

The score remained tied until the very last few moments when Wilson, a senior, kicked his first career field goal to give Mercer only its second win in 15 games against Danville.

The atmosphere was tense in the closing minutes, but Baughman said the Admirals tried to focus on the task at hand.

“The intensity on the field was crazy, people arguing, hearing the crowd get into it. But we try to go out there and block out all that noise and do our jobs,” he said.

Demauriah Brown ran for 73 yards and Josh Bixler ran for 58 yards for Danville, while Denim Griffieth ran for 47 yards for Mercer in the teams’ first meeting in nine years.

Danville will be back home this Friday to play Atherton, a Class 6A school that has won its last two games and thumped Thomas Nelson 56-7 on Friday.

Mercer will play its first road game at Southwestern, which is 3-0 and coming off an open date.

“We won. We got a lot of things that we need to fix and correct, but at the end of the day, it’s a lot better to try to fix those things after a win than it is after a loss,” Yeast said.