KSD teacher is KY Teacher of the Year finalist 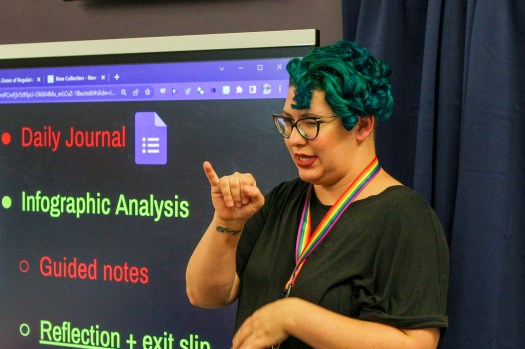 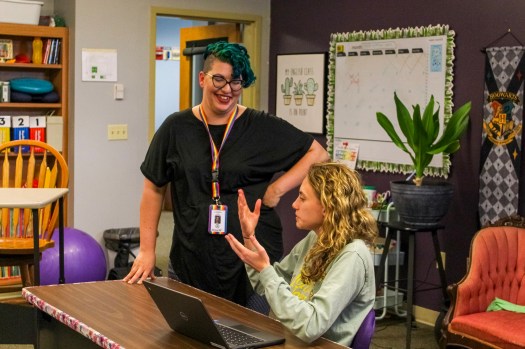 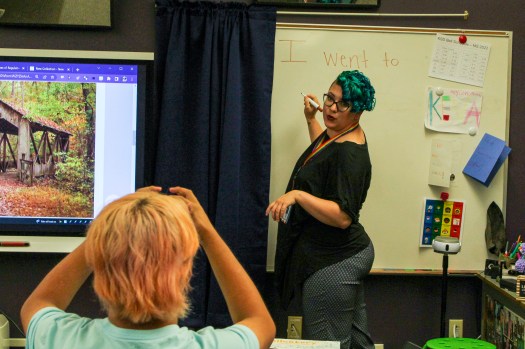 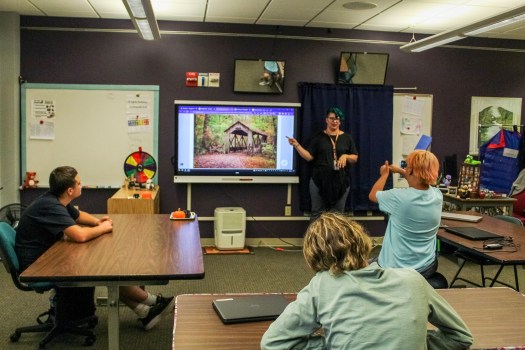 One of Buckley's English classes has only three students, but provides an intimate learning environment 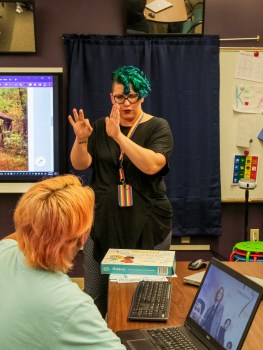 Buckley answers a question from one of her English students. photo by Fiona Morgan 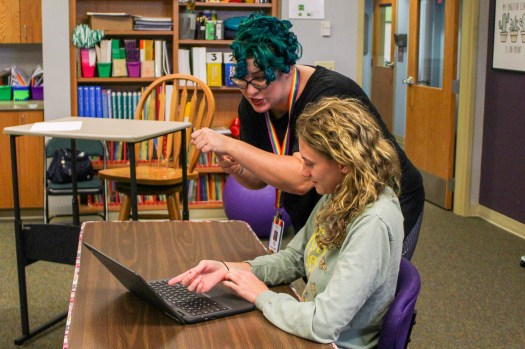 Kentucky School for the Deaf teacher Caitlin Keva Buckley never expected to go into deaf education. Four years after starting at KSD, she has been nominated for the Kentucky Department of Education and Valvoline’s 2023 Teacher of the Year award.

She is one of 24 educators in Kentucky who were given the 2023 Valvoline Teacher Achievement Award in July. She was then chosen as one of 11 semifinalists for Teacher of the Year.

She said teaching English to deaf students can be more difficult than many think, because ASL is those students’ first language. She explained the problem of language deprivation, where since 90% of deaf children are born into hearing families, many deaf children spend years without natural language access.

“A child who’s hearing starts getting their language from the womb; they hear sounds, words, they come into the world and everything is just a barrage of language because they’re hearing words, seeing them and having a connection to them,” Buckley said. “It’s those natural ways of building language that we don’t think of as teaching that families, whose child is their first experience with deafness, don’t think of or don’t know of.”

Buckley said kids age 5 and sometimes through age 10 come to the school with little or no English knowledge. Teachers have to build sign language as their first language, then a second language in English.

“We can be teaching first language, second language, and common core content all at once, and it can be a very tremendous task that you don’t often see anywhere else,” Buckley said.

Buckley starts every class with a “zones of regulation” check-in, which is a program established by an occupational therapist; and it’s a way of identifying how people are feeling and how it can impact their ability to work. Students put their names in one of four zones – red, yellow, blue, or green – based on how happy or unhappy they’re feeling that day.

Buckley gives an opportunity for students to talk about why they’re feeling the way they are. She said it’s a good way to build a social-emotional connection before moving into that day’s lesson.

“Building relationships early on is so important across the board, and especially important to me, because we do see students more than their families do, whether they’re day students or residential; so building that relationship and making sure they’re comfortable and safe in their environment first,” Buckley said.

One of her teaching philosophies is to model being human. She admits when she’s wrong, made a mistake, or doesn’t know the answer to a question; and said students are sometimes surprised to hear their teacher admit a mistake.

“Modeling those things, the social-emotional awareness, just being human with kids helps a lot, because many of them have that idea that teachers are superhuman, they do no wrong, and they know everything,” Buckley said. “Modeling being human is so powerful.”

Going into deaf education was a happy accident for Buckley. She attended Eastern Kentucky University, which is the only school in Kentucky with a Deaf and Hard of Hearing teaching program. After switching majors five times, Buckley decided on education because she wanted to make a difference in people’s lives.

She had to take an education orientation class when starting her new major, and signed up for the DHH education class “accidentally,” not realizing it was different from regular education orientation. Although everyone in the class used sign language, Buckley said it took her until the end of the semester to realize that the class was part of the DHH program. But she fell in love with deaf education and decided to pursue it.

“It was love at first sight with ASL, and then falling into the program was a natural next step after the ‘accident,’” she said.

She got a dual certification in middle grade English and DHH education, and later got a master’s in Literacy also from EKU. She learned ASL in 2015, but picked up more when she did her practicum and student teaching at KSD, which is where she knew she wanted to teach.

Buckley started at KSD in January 2018 teaching high school, and moved to teaching middle school this year. She said her first year at KSD was very challenging, partly because she didn’t know ASL as well as everyone else.

“It really was sink or swim; there’s students that have been really gentle and patient and kind, and there have been others who have been so much more direct, and I needed both; it’s been a great way to learn culture and language,” Buckley said.

One student who nominated her for Teacher of the Year was one of her more challenging students. But this past year, Buckley said he purposefully started calling her ‘mom.’

“He challenged me so greatly last year, and I felt like I was fussing so often and trying to correct and find ways to work with him, and felt like I was so hard on him, and for him to just start calling me ‘mom,’ and start writing notes and making cards, it was so rewarding,” Buckley said.

Another teaching philosophy she has is to teach that learning is lifelong, that she is still learning things. She’s also a strong component of regulation and sensory integration in the classroom. With a son who’s autistic, Buckley has learned the importance of going beyond simple lectures.

“Working here with students who have their own sensory needs, it’s opened my eyes to how traditional values in education, like sitting still and listening for a very long time, don’t really service us humans,” Buckley said. “My hope, if selected [for the award] and given a wider platform, is to encourage those values of lifelong learning and sensory integration.”

Buckley also uses guest speakers and involves the local community in teaching. This year she is collaborating with Kate Snyder, who owns Plaid Elephant Bookstore in Danville. Snyder gave the school a discount on IlluStory kits, which students can use to write a story and draw pictures with it.

When her students create their books, Buckley will send them to the IlluStory company for them to print the books in hardcover. Snyder will be hosting an author event where those students will read their stories with an interpreter for the audience. The event will happen sometime in November.