Rebels playing for championship in 2A tournament 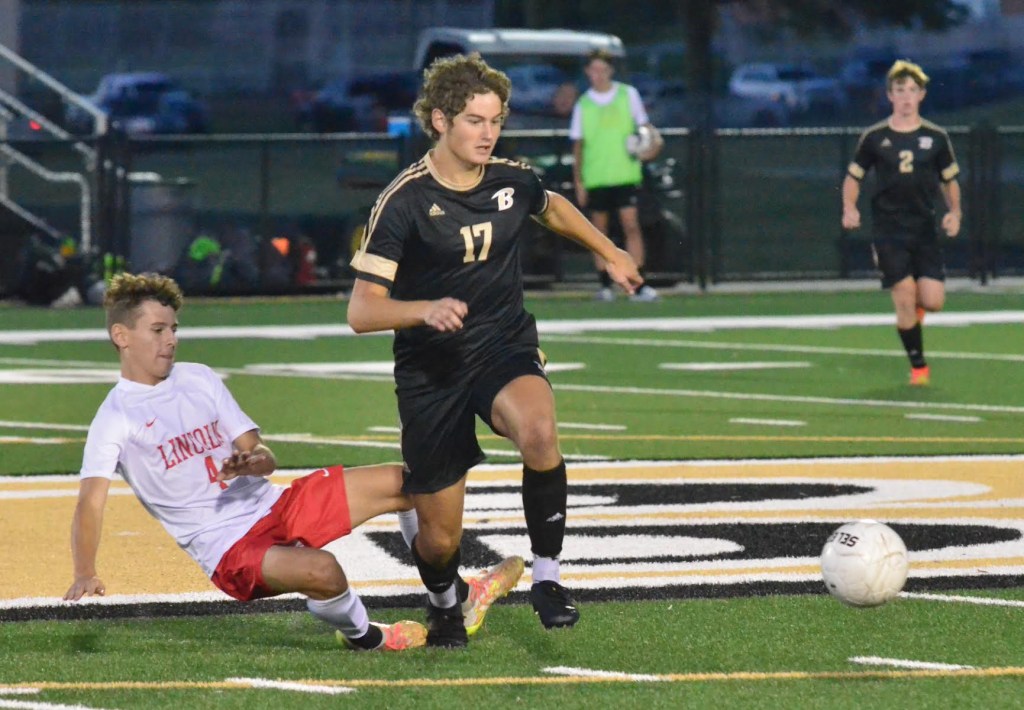 Tristan Compton (17) of Boyle County advances the ball as Lincoln County’s Conner Sparr attempts to take it away during Boyle’s win Tuesday. Photo by Mike Marsee

It does not have the cachet of a state championship or the familiarity of the All “A” Classic, but the Kentucky 2A Championship has the attention of the Boyle County boys soccer team.

The Rebels are relishing their chance to play for a championship in the statewide tournament for what are effectively mid-sized schools.

It presents Boyle with an opportunity it hasn’t had before, and one the Rebels are ready to embrace.

Boyle will play Warren Central in a semifinal Friday at Panther Field in Owensboro, and a win would send the Rebels into the Saturday championship game against Louisville Christian or Corbin.

Boyle Coach David Ritchie said his players are excited about what they have achieved to this point in the 2A competition and what lies ahead.

“I think it’s huge. You can definitely feel the buzz around it,” Ritchie said. “There’s a lot of good teams that were in it, and to be one of the final four left is huge. It really says a lot about the momentum of this team right now.”

Boyle (10-3-2) defeated Bourbon County, Harrison County and Lexington Catholic to win its 2A sectional — it was the Rebels’ first win over LexCath since 1997 — then won a semi-state game at Rowan County last week to advance to the final four.

The Rebels recently finished as runners-up in Madison Central’s Tribe Shootout, and their 9-0 rout of Lincoln County on Tuesday gave them wins in five of their last six games.

“It is definitely trending in the right direction,” Ritchie said. “We’re really moving the ball well and the effort’s there, and they’re getting hungry to score in front of the goal, which is always important.”

Midfielder Jack Little said this tournament is important because it gives Boyle a more realistic shot at a state championship, if not the state championship. All but four of the 47 KHSAA boys soccer champions have come from Fayette or Jefferson counties, though Boyle reached the semifinals of the KHSAA state tournament in 2008,

“This tournament is great for us to show that Boyle County soccer is here,” Little said. “It’s tough for a school our size to beat St. X, to beat Trinity, to beat these huge Lexington schools. We can do it, but it’s tough for us to string (those wins) together and win a state championship.”

Ritchie understands that better than most. Ritchie played for Danville teams that competed in the All “A” Classic, and he was part of the 2006 Danville team that reached the All “A” finals.

“I’ve been trying to push that it’s a truly winnable thing, and it’s something that you don’t forget,” he said. “You want to make sure that you give it everything that you have, because you do remember it and you want the best experience possible.”

Boyle is led on offense by Tristan Compton, who scored five times in the win over Lincoln and has 21 goals in 15 games, and Matthew Britt, who has seven goals.

“When we’re at our best is when we’re keeping possession, swinging the ball, and we can really brean down teams’ midfields with that and get it to Tristan after we open up space by switching it,” Leines said.

“For the first time, at least in my experience, this is a team that does not look direct first,” Little added. “This is a team that looks wide and wants to score in different ways. Tristan can score goals … but what we’ve done is allowed him space and allowed him to receive the ball in places where he just has to make one move instead of sprinting past their entire back line.”

Meanwhile, the Boyle defense has six shutouts and hasn’t given up more than two goals in any game.

The Rebels won the 12th Region in 2020 and were runners-up last season, and the players said positive changes introduced by Ritchie, the team’s fourth coach in as many seasons, have made them even stronger.

The Rebels will enjoy the backing of some fellow students Friday in Owensboro, as the school will send a pep bus first to the afternoon soccer game and then to the Boyle-Bowling Green football game 70 miles away in the evening.

Boyle has already enjoyed some success in 2A competition this school year. Maggie Cerqueira placed third in the girls golf tournament Monday at Owensboro Country Club, shooting 5-over-par 77 to finish one stroke off the lead.

Cerqueira eagled the par-4 seventh hole and had birdie putts on the final two holes that would have put her into a tie for the lead.

The Kentucky 2A Championships began in 2019 with boys and girls basketball tournaments and have expanded to competitions in nine sports.

It is open to schools with enrollments of 1,000 or less that are too large to be eligible for the All “A” Classic. The current membership list consists of 51 schools, including Boyle and Mercer counties.