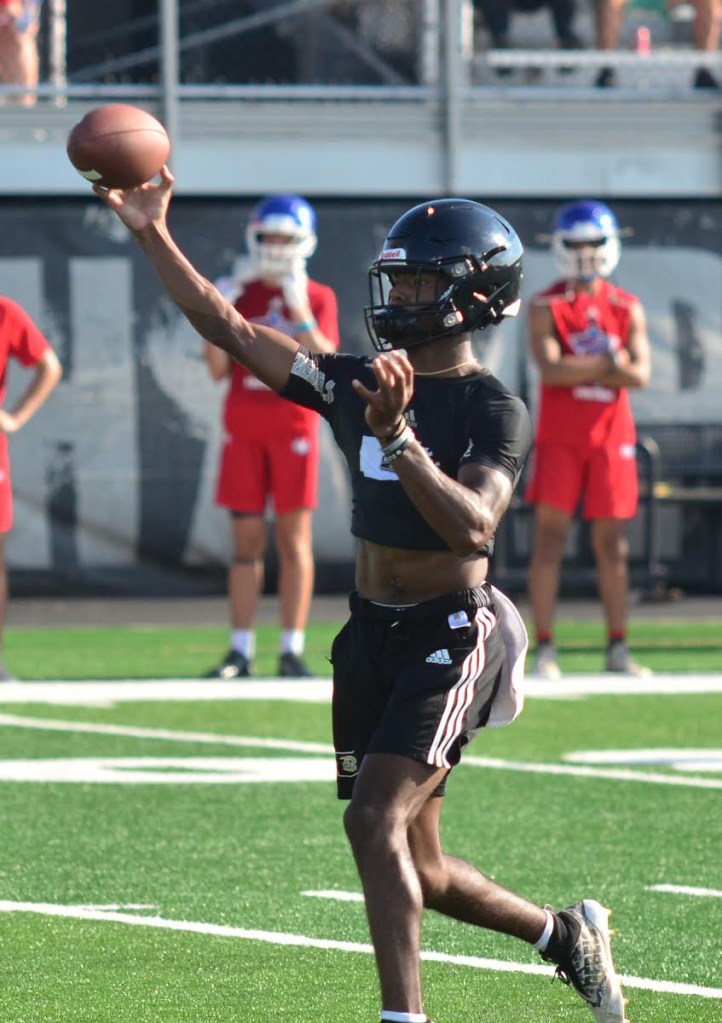 Boyle County quarterback Sage Dawson puts up a pass during a 7-on-7 competition July 19 at Rebel Stadium. Photo by Mike Marsee

Boyle County’s game Friday at Bowling Green is a battle between two Kentucky football powerhouses and another stern test for the Rebels, and Haddix said it’s just the kind of game he wants his team to play.

“I think it’s one of the best matchups around the state. Those are the things we want to get into,” the Boyle coach said.

Over the past 30 years or so, only a couple of other schools have done as much as Boyle and Bowling Green to position themselves among the very best programs in the state.

Neither team had won a state championship before 1995; they have combined for 17 titles since then — Boyle has won 10, all in the past 23 seasons; Bowling Green has seven, including six in the past 11 years.

And Haddix said while the contrast between rural school and urban school may be obvious, their similarities are just as evident.

“They’ve got a tradition of winning. They’re a good academic school. Both schools have won and both expect to win,” Haddix said.

Both the Rebels and Purples are off to 4-0 starts this season, and both are ranked among the best teams in the state. Boyle is No. 1 in Class 4A and Bowling Green is No. 5 in 5A in the current Bluegrasspreps.com rankings.

Both teams boast offenses that have multiple ways to move the ball downfield. Bowling Green averages 35.3 points and 361 yards per game behind an experienced offensive line led by 6-4, 290-pound senior guard Austin Anderson, who has committed to Liberty.

Quarterback Deuce Bailey went 9 for 25 and threw two interceptions in the Purples’ 31-0 loss at Boyle last season, which was only the second start for the then-freshman.

“He’s improved a ton since then,” Haddix said.

Bailey has thrown for 753 yards and eight touchdowns with only one interception this season, and he has an assortment of talented receivers and running backs.

“They spread the ball out … but they’re not throwing all the time. They’ll run the ball, and they’ll get in a bunch of different formations. That really makes it tough (to defend),” Haddix said.

That sounds a lot like Boyle, which is averaging 39.5 points and 354 yards per game in its balanced offense.

Bowling Green’s defense has experience among the linebackers and secondary — three-year starters Bert Kibawa and Augustin Nyembo are among the defensive stalwarts — while the defensive line has been rebuilt after three starters graduated.

“They’ve got some players,” Haddix said. “They never don’t have players.”

Boyle is one of three 2021 state champions on Bowling Green’s schedule. The Purples play 5A champion South Warren and 6A champion St. Xavier in the second half of the season.

The Rebels are coming off a 31-17 victory over Henderson County, the closest of their four games this season.

“Obviously we’re not playing at our best, but we’re winning,” Haddix said.

Several Boyle players remain out with injuries, particularly on the offensive line, but one Rebel will return this week. Senior Jakei Tarter, a tight end and special teams player, will make his season debut after recovering from a broken collarbone.

This will be the third meeting between Boyle and Bowling Green; the Purples won the first meeting in 2007.

Mercer has a winning streak after an 0-2 start, but the Titans, who edged Danville 17-14 last week, face tough sledding at Southwestern, the No. 4-ranked team in Class 5A.

The Warriors have won nine consecutive regular-season games since a 22-21 loss at Mercer last season.

Lincoln is still on the hunt for its first win, having shown signs of improvement on offense while its defense gives up points in bunches.

The Patriots, who lost to Bell County 40-30 last week, are allowing 38 points per game, while East Jessamine has averaged just 14.8 points.

Garrard is also still looking for its first win and coming off its closest game of the season last week, when it lost 20-14 at Western Hills.

Anderson was winless until last week, when the Bearcats blasted Breckinridge County 54-30.