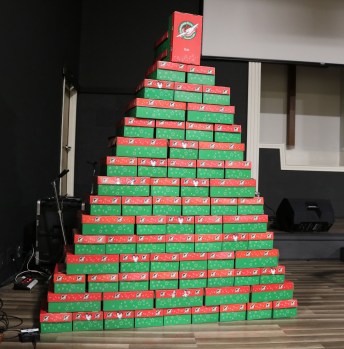 Operation Christmas Child was started in 1993 as a way to provide Christmas gifts to impoverished children. Photo submitted 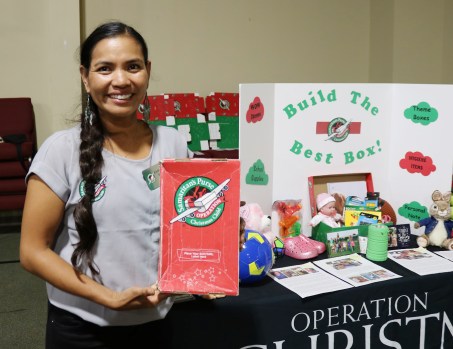 When Kimheang Vance was 14, she did not know what church was, and she had never heard of Christmas.

She knows all about both now.

Vance grew up in Cambodia and her family often did not have enough food to eat, and she had to walk a mile each way to school. It was not an easy life for a teenager. When Vance was 14 she was invited to a church Christmas celebration. Although she did not know what any of that was about, she went because there would be free food, and she was hungry.

As the celebration was wrapping up, organizers handed out Christmas Child shoeboxes to children who had attended.

Operation Christmas Child is a program started by The Samaritan’s Purse in 1993 to help provide Christmas gifts for children in impoverished countries.

On Saturday, she was at the Junction City First Baptist Church to tell anyone interested in listening about how that moment changed her life.

The box was the first gift she had ever received. Rather than a doll or some other gift commonly associated with Christmas here, the box contained things she needed every day but could not afford, such as personal hygiene products, school supplies and a book about Jesus. It also included a jump rope to help her stay active.

“The box wasn’t just a toy . . . and school supplies, it lead me the way to know Jesus Christ,” Vance said in her broken English.

Vance told the crowd in Junction City that she had a happy, yet modest childhood. Her family did not have enough money for school supplies or to buy her a school uniform, so she was elated when she received the gift box.

The booklet she received was titled “A Greater Gift” and it was first time she had heard of Christianity or Jesus.

Today, it is a Christmas tradition she shares with her own children as they pack boxes to brighten Christmas for children in need, and that something as simple as a pencil for a child who does not have one should not be taken for granted.