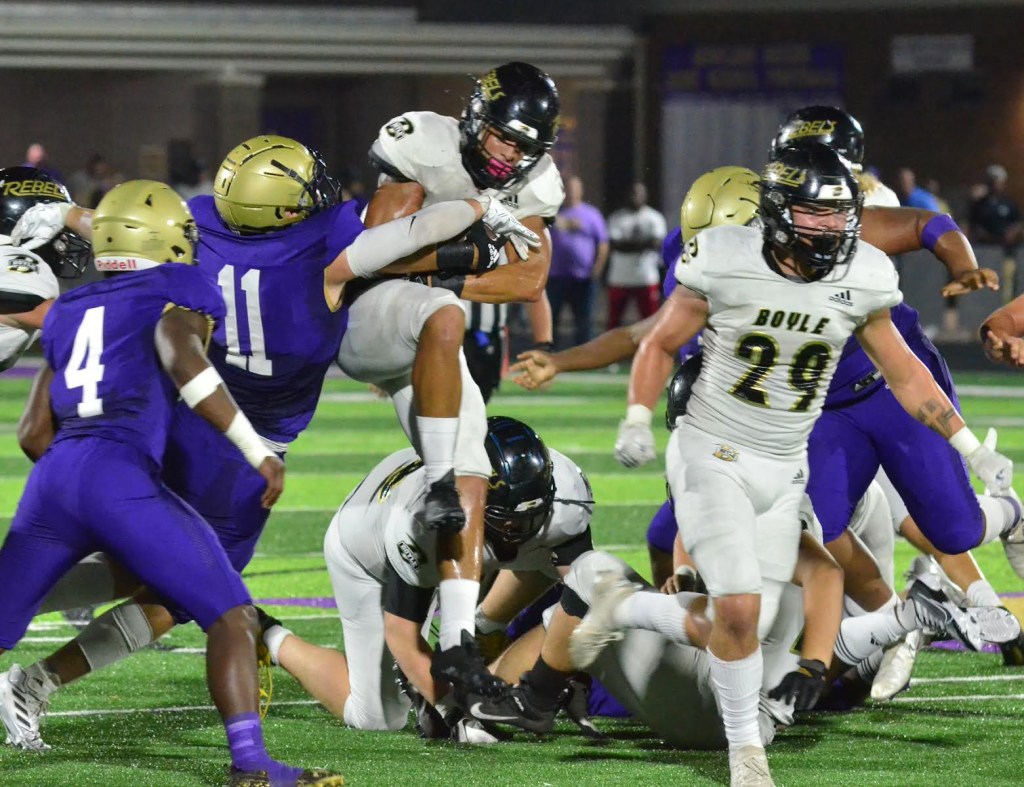 Brock Driver of Boyle County leaps through the line of scrimmage as teammate Dalton Stone (29) clears the way and Bowling Green defender Jake Napier (11) tries to bring him down during the first quarter Friday. Photo by Mike Marsee

That’s evident in the way the Rebels have played on the past two Friday nights, responding to the challenges presented by quality opponents from larger schools.

Most recently, Boyle battled Bowling Green to a draw over 2½ periods before scoring on three consecutive possessions for a 35-21 victory.

Of note within the greater challenge of this game was the way Boyle’s offensive line responded to the challenge from its coaches this week.

The Rebels’ front five, which had been down two starters due to injuries, opened the way for a running game that allowed Boyle to control the second half.

Boyle Coach Justin Haddix said the Rebels ran the ball so well in large part because the offensive line gave its best performance of the season.

“We challenged them and they responded,” Haddix said. “How big was that? Good teams have got to run the football, and we ran the football and dominated the line of scrimmage.”

Haddix said he and his staff challenged the offensive linemen throughout the week in practice following a hard-fought win over Henderson County in which Boyle had 146 rushing yards.

“We were not happy with the way we played last week up front, and, man, what a change that made,” he said.

Avery Bodner rushed for 125 yards and two touchdowns to lead a Boyle ground game that got a handful of big gains and a whole bunch of tough yards.

Montavin Quisenberry ran for 80 yards, Sage Dawson ran for 76 yards and Brock Driver, a linebacker who saw his first action of the season at linebacker, had 40 yards.

Each of them made other big plays as well. Dawson completed 10 of 14 passes for 97 yards and two touchdowns, Driver recovered a fumble one play after Boyle’s tiebreaking touchdown that led to another score and Quisenberry returned a kickoff 85 yards to set up the final touchdown and led his team in tackles with seven.

The Rebels’ defense allowed a season-high 371 yards but forced two turnovers and got stops on four of Bowling Green’s final five possessions.

“We don’t want them to gain a yard, but that’s not realistic,” Haddix said. “They made some plays. They’re a good football team, and you can’t take anything away from them. We just made some more.”

Bowling Green (4-1) got its biggest play on the first series of the second half when Deuce Bailey threw a deep pass to Easton Barlow for a 77-yard touchdown that tied the game at 14-all.

The Purples followed that with a three-and-out defensive stop and seemed to have momentum on their side, and they advanced the ball to the Boyle 26-yard line before penalties thwarted their drive.

Boyle then changed the game with three straight running plays: a 7-yard gain by Bodner, a 42-yard gain by Quisenberry and a 31-yard scoring run by Bodner that gave the Rebels the lead for good.

Brummett said that’s when he knew the Boyle offensive line was playing as it should.

“We ran the same exact play three times in a row and got a touchdown,” he said.

Boyle got the ball back at the Bowling Green 38 following Driver’s fumble recovery and doubled its lead on a 15-yard touchdown catch by Will Alexander.

Bowling Green mounted one more scoring drive, marching 79 yards in nine plays and scoring on a 7-yard run by Javen Huddleston to pull within 28-21 with 10:16 remaining.

The Rebels regained control, however, when Quisenberry returned the kickoff 85 yards to the Purples’ 14 and Driver scored his first career touchdown four plays later on a 3-yard run.

Brummett said the challenge issued by Boyle’s coaches included some in-your-face instruction and intense work by the scout team.

“They tell the scout team to give us a look better than the look that we’ll get in a game, and if the scout team doesn’t do that (they) get punished,” he said. “The scout team is giving us the best look they can every day.”

He said he and his fellow offensive linemen took their coaches’ criticism personally, but they also took their advice to heart.

“It’s disrespectful, but honestly, it’s true. We were not playing to Boyle County’s standard, but tonight we showed that we can,” he said. “We really did respond well this week in practice, and that helped today.”

Haddix said he believes the Rebels often perform well in games because they have been pushed in practice.

“People wouldn’t believe the stuff these kids go through every day, from the offseason to now, and they’ve got so much invested,” he said. “You see it in the way they play, and I think that’s what sets us apart.”

It was a victory in familiar surroundings for Haddix, who was a student-teacher at Bowling Green during his time at Western Kentucky.

Bowling Green took a 7-0 lead with a 13-play, 87-yard drive on its first series. Quisenberry had a receiving touchdown and Bodner had a rushing touchdown and Gage Feltner recovered a fumble in the second quarter for Boyle.

Feltner was one of three Rebels who returned from injury last week, along with tight end Jakei Tarter and offensive tackle Huston Bird.