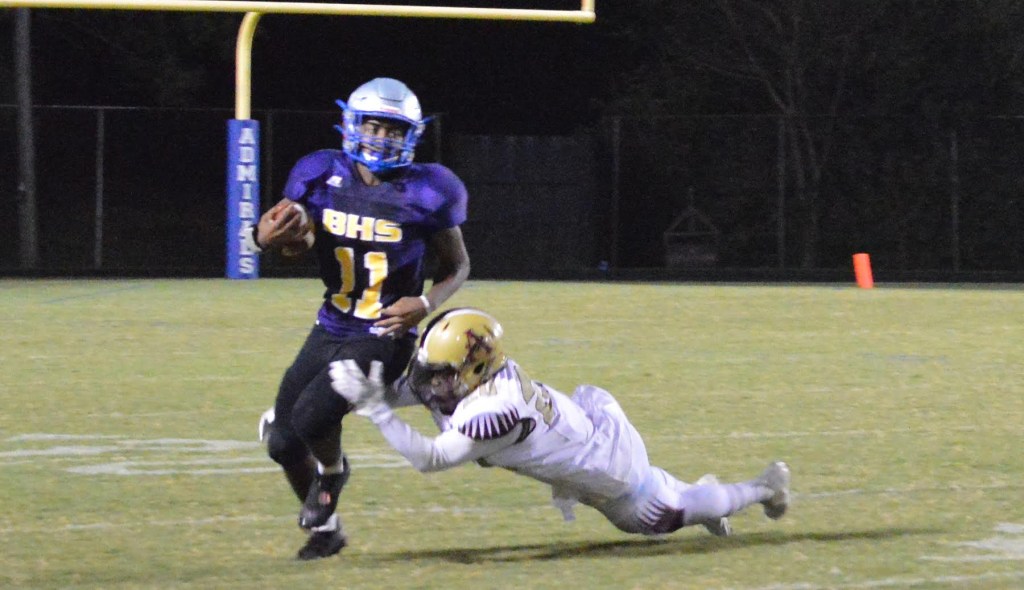 Jalen Dunn (11) of Danville tries to escape the grasp of an Atherton tackler during the third quarter Friday. Photo by Isabella Murray

It was a gold and purple night, but the Danville Admirals were feeling blue.

Danville dropped its third consecutive game Friday night, falling to Atherton 41-21 at Admiral Stadium after surrendering 34 unanswered points in the second half.

The night began with the celebration of both Bate Alumni Night and homecoming. The Admirals switched out their blue and white uniforms for purple and gold for the annual recognition of the former Bate High School, which educated the city’s African-American students prior to integration, and many fans wore gold and purple as well.

The first half belonged to Danville (2-3), and the Admirals took a 21-7 lead early in the second half on DeMauriah Brown’s third touchdown run of the game.

But Atherton (3-2) came roaring back, taking advantage of turnovers to score five times in the final 13 minutes.

“We got off to a great start, we were in position to put it away in the second half. We just couldn’t do it and the turnover bug got us, and I think we had some different guys turn the ball over,” Danville Coach Mark Peach said.

Four fumbles by the Admirals led to touchdowns for the Ravens as they began to leave Danville in the dust.

“We knew Atherton was a good football team coming in, a 5A Louisville school, and they were able to convert those things and were able to win the game in the second half,” Peach said.

“We knew Danville was a very talented, physical team. We knew that they were going to strike early,” White said. “They were at home with homecoming, we knew they were going to play with some momentum … so we just had to stay in it, stay composed and keep on swinging the bat.”

Danville did strike early, with Brown scoring the first touchdown on a 15-yard run only two minutes into the game.

After a sack by Xzavion Brown resulted in an Atherton turnover, DeMauriah Brown scored again on a 2-yard run in the second quarter.

The Ravens got on the board late in the first half when Demetrius Dunlap caught a pass from QuaShawn Thompson and ran 19 yards to the end zone.

Brown ran for 64 yards on Danville’s first series of the second half, scoring on a 6-yard run to make it 21-7 with 9:29 remaining in the third quarter.

The Admirals maintained momentum with sacks by Sam Shearer and Richard Norris later in the third quarter before Atherton’s Channce Thompson broke free for a 55-yard touchdown run with 25 seconds left in the period.

Following a fumble, the Ravens tied the game at 21-all in the first minute of the fourth quarter on a 47-yard pass from QuaShawn Thompson to Trenton Spurling. Channce Thompson gave them the lead four minutes later on a 28-yard run after another fumble.

Dunlap got the last two touchdowns for Atherton on runs of 30 and 5 yards, both following turnovers.

“We’re going to try to work on some ball security,” Peach said.

White said he was thrilled with the way the Ravens battled back.

“You can’t ask for a better game than this out of these great young men,” the Atherton coach said.

White was particularly proud of sophomore QuaShawn Thompson, who had 201 passing yards.

Brown rushed for a game-high 165 yards and Enrique Guiterez-Jacobs had an interception for Danville, which is off this Friday before playing at Bullitt East the following week.

Peach said there is much to work on in the two weeks of practice before the Admirals’ next game Sept. 30.

“I told the guys we’ve just got to continue to keep plugging away, go back to work, learn from our mistakes and hopefully get better with it,” he said.