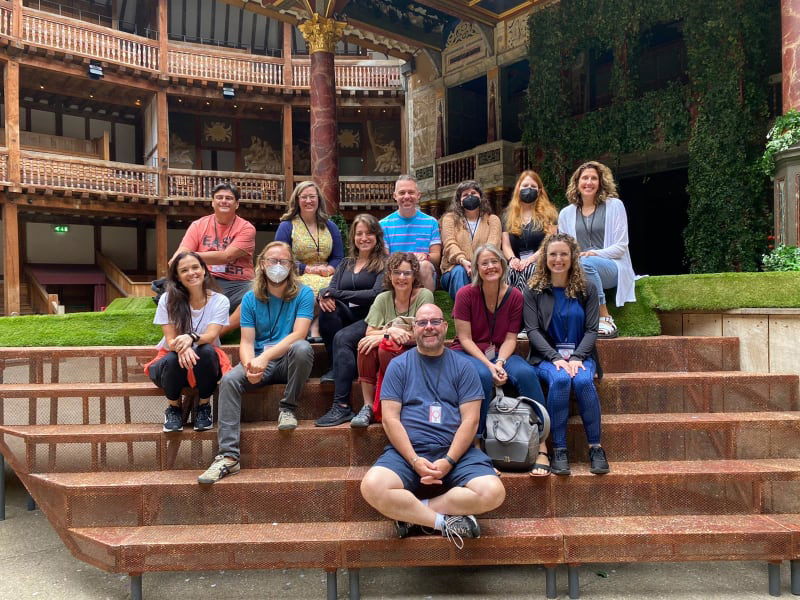 Darell Rickmers with the other teachers who participated in the Globe Theatre program. Photo submitted

Darell Rickmers, drama teacher for Danville High School and John W. Bate Middle School, got the opportunity over the summer to learn at the Globe Theatre in London, England. Now, he’s bringing those same lessons to his own classroom.

Rickmers participated in the Shakespeare’s Globe: Teaching Shakespeare Through Performance workshop for about two weeks in July. He found out about the program through the English Speaking Union, an organization that provides professional development programs for English and drama teachers across the U.S. He applied and found out he got accepted in April. With the support of the Danville Schools Education Foundation Friends of the Arts committee, Arts Director Jane Dewey and Central Office, Rickmers was able to get the funding he needed for tuition.

“We had the privilege of actually walking out on the Globe Theatre stage, having a class take place on the stage with a professional voice coach and program director,” he said. “Other classes included observations of Globe resident artists working with schools that come to the Globe for work with Shakespearean works. Along with exercises and activities, we learned how to analyze, interpret and perform many different scenes from Shakespeare’s works.”

Thirteen teachers from across the U.S. were part of the program, three of whom were from Kentucky. In the workshops, the teachers were able to take in the learning as if they themselves were the students, so they could gain a student perspective of the lessons, games and resources offered through the program.

“The resources that were available were just incredible,” Rickmers said. “I mean, I was just blown away by everything that was there. I’m still trying to absorb all of it. I’ve got a lot of notes.”

The teachers performed four scenes with assistance from the Globe’s acting, movement, speech, and renaissance dance coaches. Rickmers played roles in “Julius Caesar” and “The Tempest.” They also got to watch three professional Shakespeare plays, all performed with non-traditional casts and set in modern times.

The final aspect of the program is that Rickmers is required to conduct a professional development program for his colleagues, specifically drama and English teachers, within the district.

“I am currently working on setting this up and preparing to share what I learned with them to help them engage their students with Shakespeare’s works,” he said.

One main learning technique Rickmers took away from the program and wants to pass along to his colleagues is using physical movement and theater games to bring understanding to meter, including the iambic pentameter William Shakespeare famously used. Through these movements and games, Rickmers found that connecting movement to the heavy “down” beats  in iambic pentameter helps increase an understanding of how meter works and also comprehension of the text, since the exercises emphasized key words in the text.

Often when a teacher announces to students that they will be studying Shakespeare, the announcement is met with a big groan, Rickmers said. But the way he was instructed to teach the texts, which doesn’t just apply to Shakespeare’s works but can be used to teach a variety of literary and dramatic materials, brings not only more fun but also better comprehension.

“This is a whole lot more engaging,” he said. “It basically brings them into the text in a very physical way, with movement and interpretation and understanding, so you basically introduce the text with all these activities, and then you go into the analysis and go deep in the text.”

Rickmers also wants to, in a way, bring a piece of the Globe Theatre and London to his classes. With his middle and high school classes, he brought in posters he received through the  program and took pictures and videos of the Theatre’s layout and traditions to bring a cultural history perspective to his classes and help his students better understand how different theaters are structured. For example, he has clips of pre-show traditional music that would have been played during Shakespeare’s time.

It was special to experience London and theater history and see where the different theater sites and landmarks are that he teaches his classes about, he said, and he’s thankful for the opportunity.

“I was very overwhelmed with the generosity and so forth, and that’s why it’s really important to me that I give back to the district.”