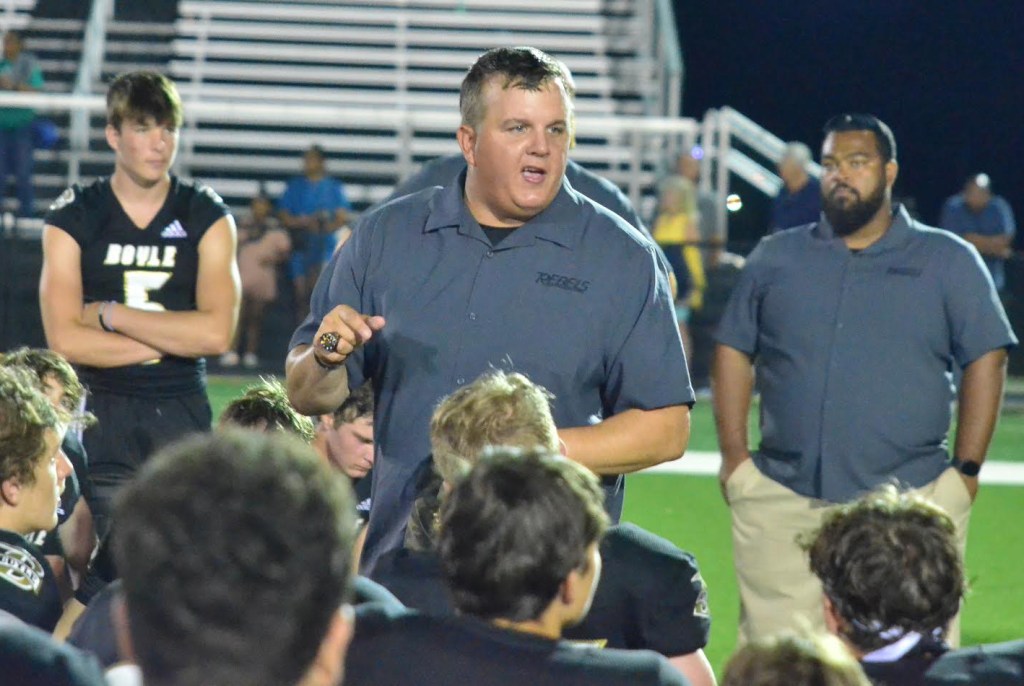 Another week, another large school on the Boyle County football schedule.

For the third consecutive week and the fourth time this season, Boyle will play a bigger school when it hosts North Hardin on Friday at Rebel Stadium.

And while the Trojans may not have the marquee attraction of some of the teams the Rebels have played so far this season, Boyle Coach Justin Haddix said they will be another tough opponent.

“I think playing quality people is always big,” Haddix said. “If you look at our schedule, there’s not too many teams where you can say, ‘If they show up they’re going to win.’”

North Hardin (3-2), the last of three Class 6A opponents Boyle will play this season, is a big school with a big team. But it isn’t the same team Boyle (5-0) faced last season, when the Rebels held the Trojans to 77 yards in a 49-6 win in Radcliff.

The Trojans have a talented first-year quarterback, as well as a new look on defense.

Senior Jayden Thorpe played outside linebacker and occasionally running back last season before moving to quarterback, which he last played in 2019 as a freshman at Fort Knox. He has thrown for 727 yards and 10 touchdowns and rushed for 189 yards and two TDs this season.

“They have some packages for him, and he’s got some wheels,” Haddix said. “And they’ve got a big offensive line.”

The line is led by Trev Alexander, a 6-6, 300-pound tackle who is one of two juniors on the offense with offers from Kentucky.

The other is the Trojans’ leading receiver, Shaun Boykins Jr., who has 20 catches for 297 yards and five TDs.

“They make you cover the whole field,” Haddix said.

North Hardin’s defense has evolved from a 3-3 formation to a set that closely resembles a 4-4. Senior linebacker A.J. Rugerio leads the Trojans with 11 tackles for loss.

North Hardin opened its season with a 23-14 loss to Bowling Green, the team Boyle beat 35-21 last week. The Trojans’ three wins are against DeSales, Apollo and John Hardin, who have a combined record of 1-9.

It’s the last game before a bye week and the last pre-district game for Boyle, which has been atop the Class 4A rankings all season and has steeled itself with wins in close games against Henderson County and Bowling Green over the last two weeks.

Haddix said he’s happy with those wins but careful to make sure the Rebels don’t begin to think too highly of themselves.

“That’s something we’re always fighting,” he said. “We’ve got to play our game. We listen to the people in this circle, in our building. We can’t worry about outside influences and what they say.”

He said there are still plenty of things for the Rebels to work on, including correcting the pre-snap penalties that plagued them last week.

While a couple of previously injured players have returned for Boyle, the Rebels are now without wide receiver-linebacker Cole Sims, who missed the Bowling Green game with a shoulder injury and will miss this week’s game and perhaps more, Haddix said, pending the results of an MRI.