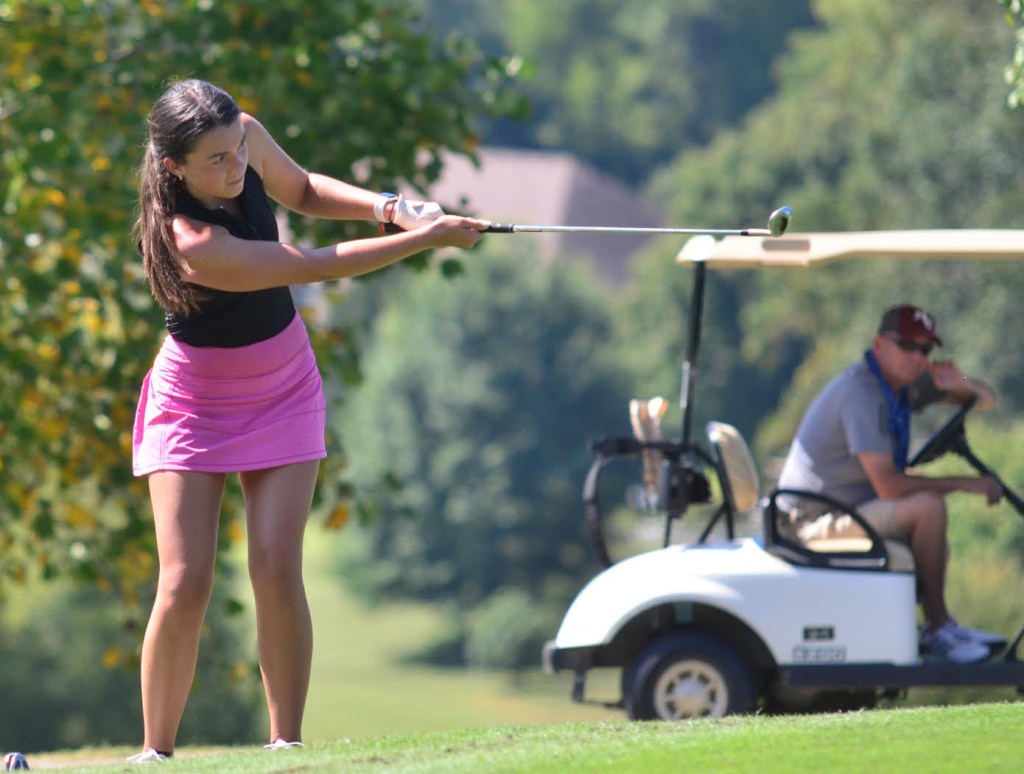 Carly Durham of Boyle County follows through on a chip shot on the 18th hole Tuesday. Photo by Mike Marsee

It was payday for the Boyle County girls golf team.

The Boyle girls put themselves in the best possible position to earn a qualifying spot in the state tournament Tuesday, and their work was rewarded with a runner-up trophy that serves as their ticket to state.

Led by a trio of seniors, the Lady Rebels finished second in the 4th Region Tournament on their home course, qualifying for the state tournament as a team for the first time since 2013.

“It’s so rewarding to see the girls’ hard work come to fruition,” Boyle Coach John Cerqueira said. “I knew we had an outside chance at runner-up but I knew we needed to play really well.”

Boyle’s score of 357 was 31 strokes behind team champion West Jessamine but 12 strokes clear of third-place Marion County on a warm day at Old Bridge Golf Club.

She will compete in the state tournament for the fourth consecutive year, but this time will be different.

“It’s very exciting to move on for the fourth year in a row, but this year will be extra special because I get to do it for the first time with my teammates,” Maggie Cerqueira said.

Boyle will play Tuesday in Owensboro in the first round of the state tournament, an 18-hole event from which the top finishers will advance to the 36-hole state finals Oct.7-8 in Bowling Green.

“Hopefully this success will increase interest in our girls golf program so it can continue to be successful,” said Maggie Cerqueira, who was four strokes behind medalist Madison Borders (69) of Thomas Nelson.

Kendall Williams shot a career-best round of 90 and Carly Durham shot 93 for the Lady Rebels, meaning all three of the team’s seniors finished in the top 20.

“Maggie, Carly and Kendall stepped up big-time, and those senior girls have been the core of our team for quite some time now. I’m going to miss them leading our team next year,” John Cerqueira said.

Hannah Bischoff shot 101 and Addison Carr shot 106 to round out Boyle’s scorecard.

Maggie Cerqueira finished in a tie for 33rd place in last year’s state tournament. Earlier this month, she finished third in the Kentucky 2A Championships girls golf tournament after shooting 77 on the same Owensboro Country Club course Boyle will play next week.

Kennedy Stamper of Lincoln County shot 86 to tie for eighth place and earn an individual state qualifying berth, and she led Lincoln (373) to a fourth-place finish in the team standings.

A day earlier, Kobe Ingram of Boyle earned an individual qualifying berth in the boys state tournament by finishing third in the boys 4th Region Tournament in Campbellsville.

Ingram shot 1-under-par 71 at Campbellsville Country Club to qualify for state for the first time and lead Boyle to the best finish among local teams.