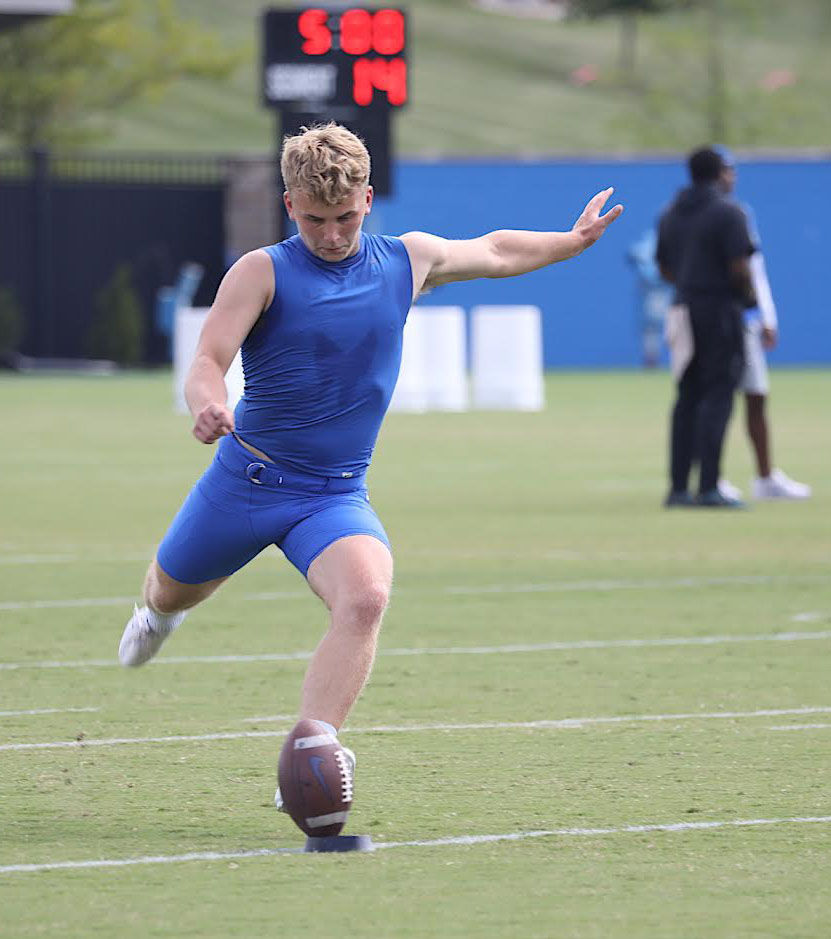 It is doubtful fans will see freshman kicker Jackson Smith play Saturday when Kentucky hosts Northern Illinois. However, it might not be a bad idea to give him a chance just to prepare him for next season.

Kentucky’s special teams are in good shape this year with Chance Poore (kickoff), Colin Goodfellow (punter) and Matt Ruffolo (placekicker). Goodfellow and Ruffolo are graduate students, so they definitely will be gone next season. Poore is a senior, but will have a Covid fifth-year option if he wants it.

Australian punter Wilson Berry was brought in last season on scholarship to succeed Max Duffy, but lost the job to Goodfellow, a walk-on. Berry is a redshirt freshman this year.

Smith is a true freshman out of Boyle County High School. His father, Andy Smith, was an all-SEC punter at Kentucky.

“I am not quite sure anyone knows what he is best at. He is so good in all three phases of the kicking game,” said Duffy, a former All-American punter who has mentored the UK freshman at times.

He was ranked as the top kicker/punter in the 2022 recruiting class by ProKicker.com and was a three-time National Specialist of the Year and three-time All-American by Prokicker.com (2019-21). He was 72-for-78 on extra points his senior year when he also went 7-for-9 on field goals. He put 68 kickoffs into the end zone and averaged 42.1 yards per punt with zero return yards.

Jackson also started at linebacker his senior season for a state championship team and had 36 tackles, six for loss and one interception.

“Everyone loves to start, but that’s not important this year with him,” Smith said. “Just learn as much as you can. Use the first year to get as many reps as you can in practice, get around the right people and improve all you can. Work on academics, work on your body. Do all the little things that can help you grow as a person, and then as a punter/kicker.”

Duffy said he was a “star” at Boyle County and was around “good people” who understood winning and what it takes to win.

“He is already very impressive. Jackson will do really well,” Duffy said. “He just has to keep his head down and work.”

Where does Duffy think he might help UK the most next year?

“I think field goals. Wilson Berry is there to punt and Chance might still be back for kickoffs,” Duffy said.

Kentucky does not have a “special teams coach” — or at least not a coach with that designation. However, Duffy says quality control analyst Louie Matsakis does a “fantastic” job preparing the special teams.

“He’s unheralded for the work he does. He comes up with all kinds of schemes,” Duffy said. “He is great at this job. He is always ahead of the curve of what people are doing. Our punt scheme was better than anyone.

“Guys are very happy he is in charge (of special teams). As an analyst he can only do certain things but he will be great for Jackson because he’s really good at what he does.”