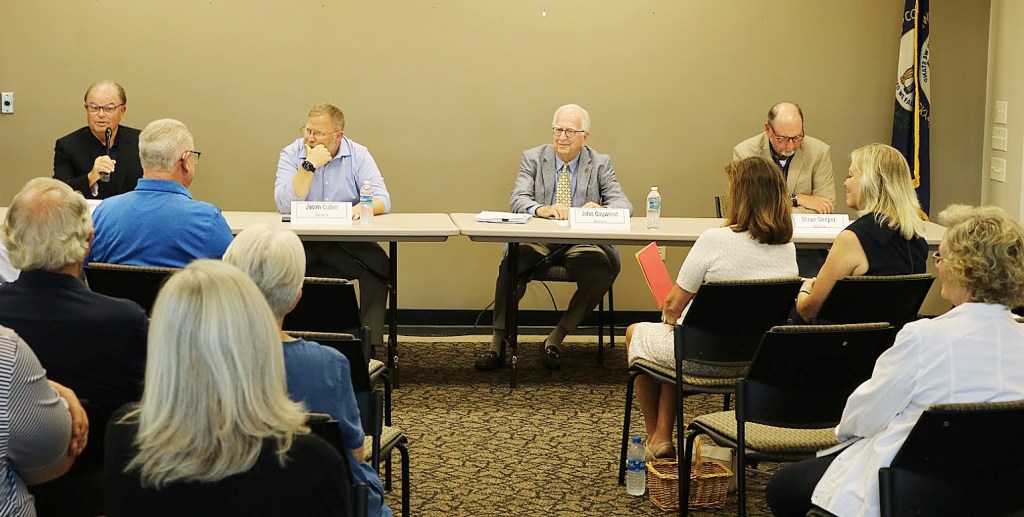 The event, held at the Inter-County Energy Cooperative in Danville, is the first of several sponsored by the Danville-Boyle County Chamber of Commerce.

There are about 1,500 job vacancies countywide, and candidates cited several potential barriers to people entering the local workforce.

Jason Cullen said he believes many employers aren’t exactly forthcoming about open positions. He said many jobseekers he has spoken to have told him they believe employers are being less than honest in job postings and want employees to take on more responsibilities than advertised with no additional compensation. He added that anyone who wants to work should be able to and cited the county’s cooperation with the Bluegrass Community Technical College as a crucial aspect of creating a stronger workforce.

“One of the issues I think we have, out of 17 counties in central Kentucky we rank 13th in median income,” Caywood said. “That’s the income where you sit around the table and talk about what you will buy next. If we don’t raise that up from where we are now, why would someone want to come here to work? We can do better, we have to make that message known.”

District 6 challenger Sleeper said that he believes many factors come into play including inflation, government policies, and a lack of training and education for higher paying jobs. He said the county should continue to support BCTC to provide skilled workers locally.

“I think its due to various reasons,” Sleeper said. “It could be due to the inflationary times we live in and supply chain issues that cause small businesses to have to limit their staffing, or governmental policies that incentivize not to work. Possibly childcare or cultural or housing issues. Another is lack of education and training for jobs that pay a higher wage. These opportunities need to be available.”

Harmon said work-life balance, which is missing in many vocations, is key to attracting top applicants. He also echoed a popular sentiment that there is a large segment of the population that for whatever reason, just does not want to work today.

They were also asked their views on the housing shortage in Danville and how it has elevated the price of real estate as well as rental properties.

Caywood said housing is market driven is driven by supply and demand, and hopes more affordable house will help solve the housing shortage.

Sleeper said that there is a lack of housing for all income levels in the city. He also said other factors help draw people to the community, including schools. He also does not think more single-family housing is the answer, but instead believes the area needs more high-density housing.

Housing inventory is always an issue when a community is growing, and is exacerbated by economic downturn.

Higher prices and higher interest rates drive new homebuyers and many younger people out of the market, thus driving up rental costs in the process.