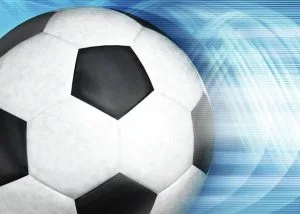 HARRODSBURG — Mercer County held off Danville for a 1-0 win Tuesday in boys soccer.

As Mercer (7-5-1) kicked off to begin the game, the energy was immediately present with both offenses making the most of their possessions and Danville’s Carter Dilbeck putting a shot just off target 40 seconds into the game. Danville (8-4-2) continued to push, with most of the Admirals’ time spent passing, forcing their opponents in blue and red to clear the ball every time they had the chance.

The Titans bounced back, though, driving upfield and recording a staggering five shots within a six-minute period, with goalkeeper Grayson Nagorka handily picking off any bound for the net. Danville’s Dilbeck put another shot on goal off a pass from Abel Goodwin. Goodwin kept this momentum, driving the ball up towards Mercer goalkeeper Jase Coconaugher several times, getting a pass towards the middle of the field nearly every time.

The back-and-forth continued for most of the half.

Dilbeck’s teammates began getting involved in upfield drives, with a shot by Iain McAlister being blocked by Mercer just after leaving his foot and Goodwin putting a shot on with 26 seconds left.

In the second half, the Titans managed to slip through the Admirals’ defense, with senior midfielder Gavin Wilson putting a shot just past Nagorka in the fifth minute to give Mercer the lead.

Danville attacker Justin Flores got in on the offensive action, putting a shot on goal and kicking a great cross that Mercer was able to clear. The Ads were able to hold onto their blistering offense until the very end of the game, with the last shot coming from Dilbeck with less than three minutes left. However, Mercer’s defense was able to counter, preventing Danville from scoring and taking home the narrow win on their senior night.

“Some nights are like that, Danville coach Brent Beauman said. “You play well, you maybe were the better team here and there but you just don’t get the win.”

Playmaker Carter Dilbeck blamed the deep but unfinished drives on his timing.

“I think a lot of it is just timing your runs right,” he said. “I feel we had a lot of good possession and good balls, but we just forced a lot of balls through, but I feel overall we played pretty solid.”